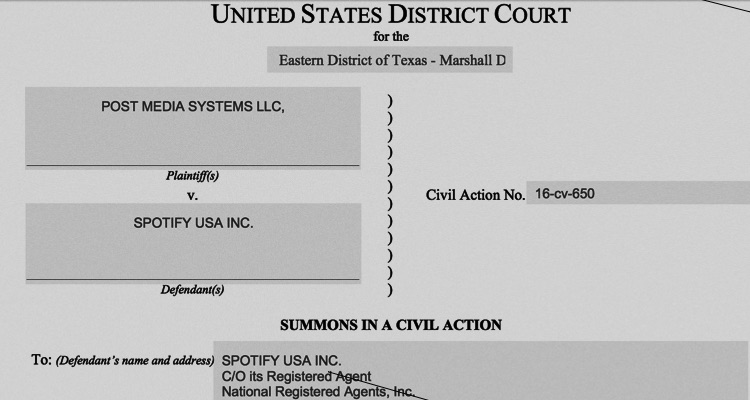 Spotify is facing yet another lawsuit…but this time it’s over trademarks and patents.

Today, a lawsuit was filed against Spotify by Post Media Systems LLC.  Post Media claims that the streaming service breaches three United States patents.  DMN has just gotten word of these actions, though the choice of court venue — the Eastern District of Texas — raises the possibility of some serious patent trolling.

Shortly after the complaint, a summons was issued to Spotify, which reads…

”A lawsuit has been filed against you. Within 21 days after service of this summons on you (not counting the day you received it) — or 60 days if you are the United States or a United States agency, or an officer or employee of the United States described in Fed. R. Civ. P. 12 (a)(2) or (3) — you must serve on the plaintiff an answer to the attached complaint or a motion under Rule 12 of the Federal Rules of Civil Procedure.

The answer or motion must be served on the plaintiff or plaintiff’s attorney, whose name and address are: If you fail to respond, judgment by default will be entered against you for the relief demanded in the complaint.

You also must file your answer or motion with the court.”

At this stage it is unknown whether Spotify will file a cross motion, but DMN presumes that this will be the case.

But, this is not the only infringing lawsuit that Spotify is facing at the moment…

The streaming service already has a lot of legal stuff their plate. First, Spotify has been battling a combined $150-200 million class action copyright infringement lawsuit brought forward by David Lowery and Melissa Ferrick.  Also, according to legal filings obtained by DMN, a Dutch photographer by the name of Dana Lixenberg is claiming copyright infringement over an image of Notorious B.I.G. within the application.

These lawsuits are inevitably damaging the streaming platform’s reputation as a service, especially on the artist front: after non-stop copyright infringement lawsuits and unpaid royalties, artists may think twice about making their music available on the platform.

Beyond the reputation devaluation, there’s the cost factor: lawsuits cost a crap-ton of money, and takes cash away from critical investment pools.  Which means, less features, less talented people, and fewer interesting ideas ahead.  Thanks court system of America!