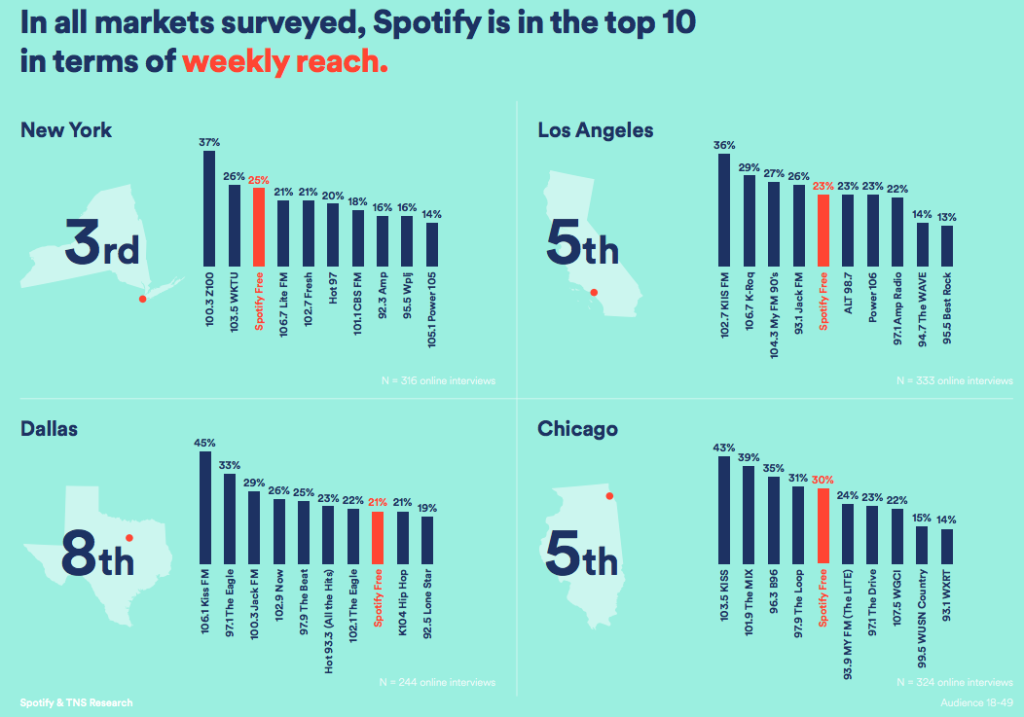 Spotify Free is the new radio.  Now what?

Spotify is facing relentless pressure to shut down its free access tier, based on industry concerns over low royalty payments.  But Spotify is now distributing data showing that its free tier actually rivals the reach of most traditional radio stations.  In major markets like New York, Los Angeles, and Chicago, Spotify Free is a top five station in terms of overall listeners and reach.

The US-based study, conducted by research firm TNS and commissioned by Spotify, was shared with DMN today but conducted in late December. It involved 1,943 respondents ages 15-64 years.  The 18-49 demographic was a particular focus, with 1,217 participants involved.

All of the participants were given questions about their listening habits, particularly as they related to Spotify Free.

Shocking results?  Well, the biggest finding was that Spotify now commands very impressive brand recognition, and that is translating into heavy listenership.  That group of listeners, in turn, displays far better listening habits when it comes to how long they listen, when they listen, and how engaged they remain.

The first major difference, according to the Spotify report, is that Spotify Free listeners are far more engaged than traditional radio listeners.  They aren’t just flicking on a station during their morning commute or blasting the radio for a quick shower or dishwashing session.  Instead, across several major cities, engagement rivaled some of the largest stations (see below).  In some cases, Spotify Free attracts the greatest levels of engagement across all traditional stations in a geographical area. 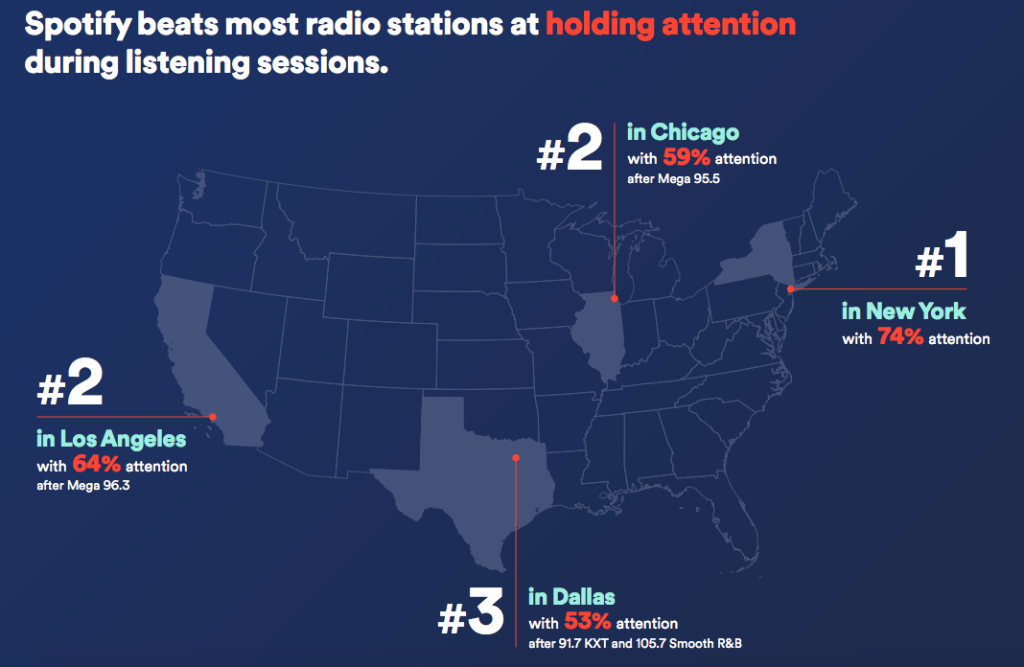 There’s also a big age differential.  In particular, Spotify Free is grabbing far more younger listeners, with Boomers and older generations more wedded to traditional radio.  That’s hugely important to advertisers, who are not only trying to sell to Millennials, they are attempting to establish longer-term relationship with them.  That’s a trump card Spotify will continue to use, especially when courting mega-advertisers that aren’t reaching everyone on traditional radio anymore.

There’s also a huge difference in the time people listen.  Traditional radio gets its heaviest listening during the morning commute, a period dominated by talk shows and news.  There’s also another bump during evening drive time, but once the car is parked, so is the radio.

Spotify has very little of that, and its listening levels are far more balanced throughout the day.  That includes nighttime, as shown by these breakdowns. 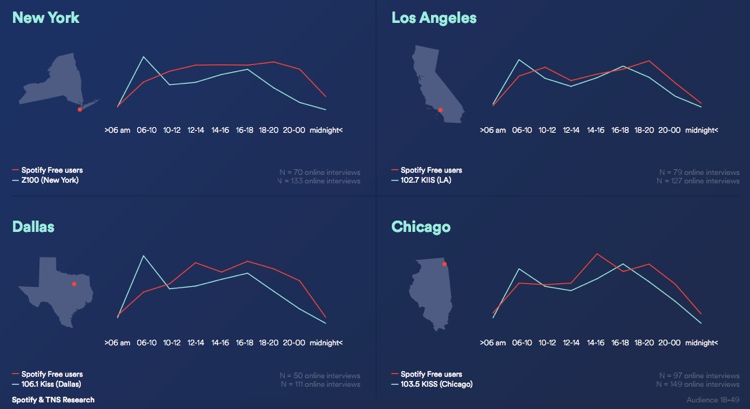 The next questions get really, really interesting.  After all, if Spotify Free is basically a giant radio station, how does that change the way that labels, artists, and advertisers view this platform?  The answer is complicated: for starters, Spotify Free is widely viewed as a drag on Spotify Premium, and Spotify has faced serious pressure to shut it down.  That’s started to bleed into public comments by executives like Sony Entertainment head Michael Lynton, who most recently projected that the industry would completely shut down free access after a satisfactory number of paying subscribers is reached.

Others feel that free access is unfair to platforms that are trying to get music fans to pay.  Just recently, Apple Music executive Trent Reznor blasted YouTube for exploiting artists while boosting its monstrous audience, though free-access platforms like Spotify and SoundCloud were also part of the complaint.  To its credit, Apple Music walks the walk, with a paid-only platform that now has 15 million takers.