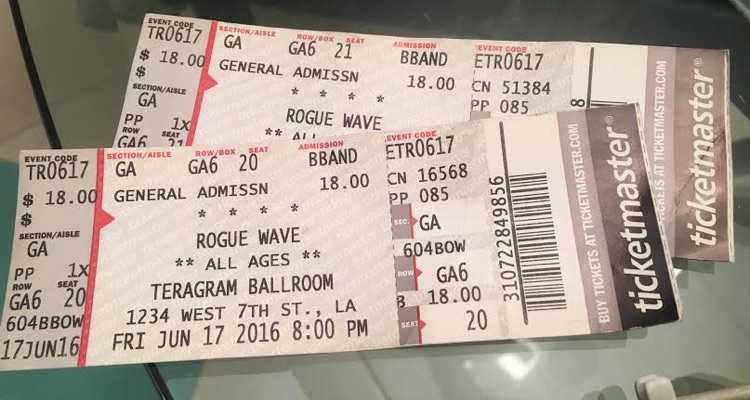 Ticketmaster tickets to Rogue Wave, who played the Teragram Ballroom in LA this weekend.

If you’ve purchased anything from Ticketmaster since 1999, you probably have some free tickets waiting for you.

Last month, we reported that Ticketmaster had settled a massive, $386 million class action lawsuit over deceptive surcharges and pricing.  Now, Ticketmaster has lost that case, but instead of simply doling out coupons and rebates as initially thought, fans are also being given access to a bunch of free tickets.

In total, millions of free tickets will be given out, and the process is starting now.

Some people have already received an email from Live Nation, which now owns the ticketing giant.  The company has just posted this to a redemption website, which is currently collecting emails for future alerts and advising of currently available tickets.

The process is a little confusing, but fans are also being directed to a sign-in page to enter the email (and password) used to purchase previous tickets.  Here, you can get a ‘Ticket Code’ redeemable for two tickets, with heavy buyers eligible for a whole lot more.

That page is here, at www.ticketmaster.com/member/vouchers.

If your email address has been consistent since 1999, or whenever you started buying Ticketmaster tickets, you should then see a complete list of voucher points and eligible tickets in your area (the period in question technically ends in 2013).  If  different email addresses were used over the period, try entering each one separately (try to remember old accounts if possible!)

Further complicating matters are ‘discount codes,’ which are also included.  Each discount code is worth $2.25, and up to two can be used per transaction.  There are also UPS shipping discounts, for those that had tickets delivered via UPS (where overcharges also happened).  In that case, you get a $5 credit, which can only be applied towards more UPS shipping.

In our testing early this (Monday) morning, location-specific tickets weren’t even being listed properly (go figure).  In fact, nothing was being listed at all.  That said, at least two buyers (one in LA, and the other in New York) have told DMN that they successfully claimed vouchers and redeemed tickets, but warned that the selection and seats aren’t the greatest.

Others have said nothing’s posted, so, let’s see how this evolves (the best advice at this point is just to check back periodically).

We do know that more tickets will be made available in the coming weeks and months, though everything is being handed out on a first-come, first-served basis.  Also: a quick pro tip is that fans should also enter their email addresses here to get the most updates possible (we’re not really sure why there are multiple sign-ups and pages.)

The class action lawsuit was first filed by in 2003, with allegations that Ticketmaster used “excessive and deceptive” fees to jack up prices on shows.  Of course, most concert attendees didn’t need a lawsuit to tell them that this was going on, though few are complaining about the freebies.  Live Nation didn’t admit any wrongdoing, but opened a $45 million fund for rebates, tickets, and vouchers to compensate those overcharged.

And, if you’re interested, here’s more of the fine print from the FAQ:

Each Class Member who made a purchase transaction on www.ticketmaster.com between October 21, 1999 and February 27, 2013, should anticipate receiving, on or around June 18, 2016, at least one Ticket Code potentially redeemable for two tickets for concert events at Live Nation owned or operated venues, subject to availability and limitations (described generally below and in more detail in the Settlement Agreement and Release). Individual Class Members will receive one Ticket Code for each purchase transaction during the Class Period, up to a maximum of 17 Ticket Codes. Once available, you may redeem your Ticket Codes on eligible transactions at www.ticketmaster.com. A dedicated website located at http://concerts.livenation.com/microsite/settlement has been established so you can readily see events, once they are identified, where Ticket Codes may be used. Please note the following regarding using any Ticket Codes you are eligible to receive.

We’ll have more updates on this soon.