DMCA takedown requests are surging. Is anything being done about this?

In 2014, Google reportedly processed a massive 345 million pirate-linking takedown requests.  But if you think that’s bad, 2015 was worse, with the number of takedown requests recorded at 560 million, a 60% increase in just one year.

It gets even crazier: in November of last year, it was also reported that the search engine received more than 2 million takedown requests in one day, which equates to 1,500 infringement requests a minute.

The fact that Google received over half-a-billion take down requests in just one year is a strong and convincing indicator that there isn’t enough being done to prevent pirate sites from popping up in Google search.  Or, at the very least, preventing them from reoccurring.

It’s broken.  So why isn’t this getting fixed?  Music artists and rights holders have been growing more and more concerned as music industry revenues have been declining year-on-year.  The sheer volume of infringing content online keeps growing, it isn’t being monitored effectively, and it’s increasingly being blamed for artist poverty. 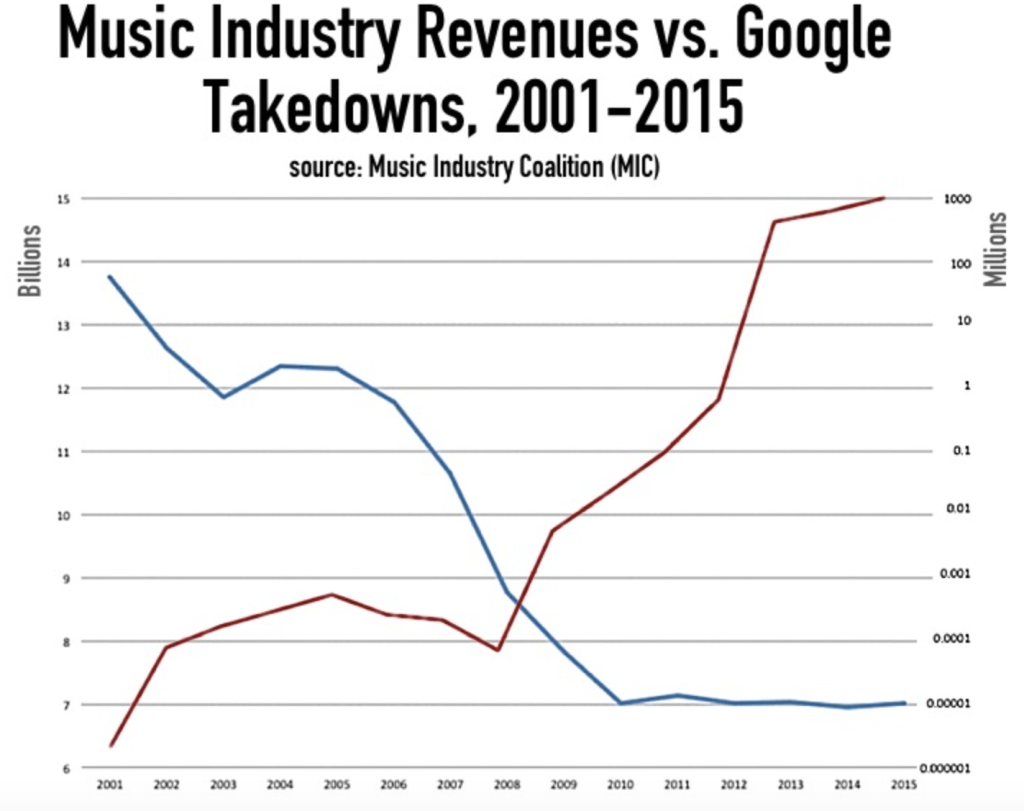 But, what is being done about this issue?

1. Artists have been appealing to Congress and US Copyright Office.

Back in April, 400 artists, songwriters, music managers, and organisations collectively demanded DMCA reforms by petitioning the US Copyright Office.  Some artists, like Nikki Sixx, took the protest a step further by writing an open letter to Google founder, Larry Page, demanding urgent change.

That may have sparked a mass idea.  On Monday, nearly 200 artists demanding DMCA reforms released an open letter today to Congress, appealing for urgent changes.

2. The US Copyright Office has been discussing the effectiveness of DMCA safe harbors.

Throughout both roundtables, there were discussions regarding the effectiveness of the DMCA.  A participant of one of the roundtables shared some exclusive information with DMN, with the following conclusions jotted down:

Still no reports of a reform, but maybe the discussions will lead to progress.  On top of these roundtables, the US Copyright Office has also launched a public consultation at the end of last year.

Google has taken some steps to address the issue by implementing changes to its search algorithm to lower the ranking of sites that receive copyright infringing notices.  But, there are still several large-scale torrent sites among the top search results.  So nice gesture, but it’s not clear how effective those changes are.