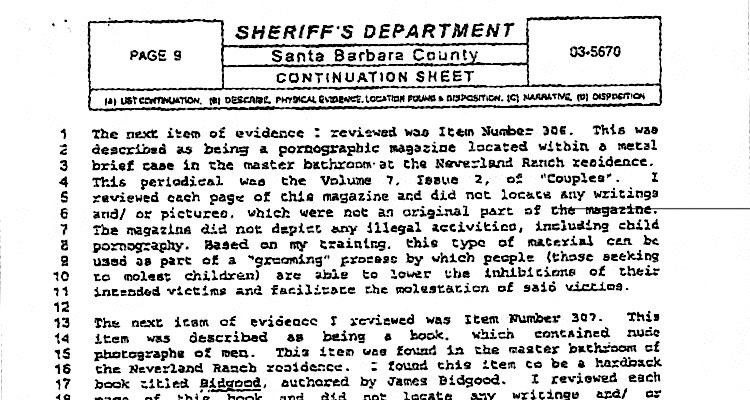 Please note: there are no images of the items listed in this report.  If you want to see the images, go to the leaked report as published by Radar Online, here (NSFW, possibly disturbing depending on your sensitivity).

[Pages not in order; listed how they appear]

Evidence Item #507. Piece of notebook paper, with drawn image of boy inside a circle.

Impressions of writing from words written on other sheets on top of this one in the pad; indecipherable words.

Located in upstairs library area of video/game room.  The book was titled, The Fourth Sex: Adolescent Extreme, with no listed author.

The investigator noted that this book focuses on ‘adolescents and counter culture,’ contained lots of images of semi-clothed or naked ‘teenagers and/or young adults’ and actually isn’t illegal under US law.  But, it represents a tool that could be used to ‘lower the inhibitions of intended victims’ and ‘facilitate the molestation of said individuals’.

The hard cover book is titled Cronos, by author Pere Formigeura, contains images of nude children of both sexes, as well as adults.  Same location as item #508.

The Best of Club, Issue no. 201.   Also suspected by the inspecting officer to be ‘grooming’ materials.

Three books, containing ‘photographs of nude and partially clothed children’.  The investigator noted that the books contained images of partially clothed or naked children, as well as images of nude adults with children’s faces morphed on top.  This technique may be used to sexualize and lower the inhibitions of a victim, according to the report.

Evidence Item #303.  Three books containing nude photographs, including those of teenagers and pre-teenagers.

Naked and semi-clothed images of women ‘in sexually explicit poses,’ as well as naked men as filmed by a gay photographer.  One book contained semi-clothed or fully-nude teenagers or pre-teenagers, according to the report.

Magazines were Barely Legal and Girls of Penthouse, with one book titled, The Gynoids Genetically Manipulated.  That book contained, according to the report, ‘appeared to have a fetish (bondage, Sadomasichism, piercings, etc.) related theme’.

Taken on set from a Home Alone movie, comically signed by the actor.

The models are posing only, and not in sexually explicit or suggestive poses.

Of the pieces of paper, one simply contained the words, ‘Paris and me’.  Another was a Guess ad ripped from a magazine.  The DVD was separated into evidence number #309-A.  Other items in the bag included a pen, business card from Goldman Sachs, ripped-up fax pertaining to a concert details, batteries, jewelry, children’s book, some handwritten notes, and a syringe.   It also contained a letter from a counselor at the Gary Community School Corporation, arranging plans to bring children to visit California in the first half of 2004.

Also included were notes between Jackson and Gavin Arvizo, who later accused the pop star of molestation.

The DVDs were the following titles: Michael Ryan’s Believe It or Not, which featured hardcore pornography, and Sloppy Dogs Presents: Fuck Me, I’m a Bad Girl.

There were also two issues of Gallery, a pornographic magazine.

No images sexually explicit in nature.

Other items described in court filings (contained within the same document stack):

Book: ‘Boys Will be Boys,’ contains full frontal nudity of boys under the age of 14; personally inscribed by Michael Jackson.

Book: ‘In Search of Young Beauty,’ containing pictures of children, boys and girls, some nude.

Book: ‘The Boy, a Photographic Essay,’ containing images of boys, some nude.

Photograph: Noted in the document as ‘believed to be Jonathan Spence; fully nude.’

‘The Christy Report’, nude images from the 1940s, some described as sadomasochistic.

‘Robert Maxwell Photographs,’ various images, including those of children.

Nude images of a nude male couple, another contained nude images of men from the 1800s.  Photos of teenage males nude, images of adults with childrens’ faces morphed on top, some nude photos of children. 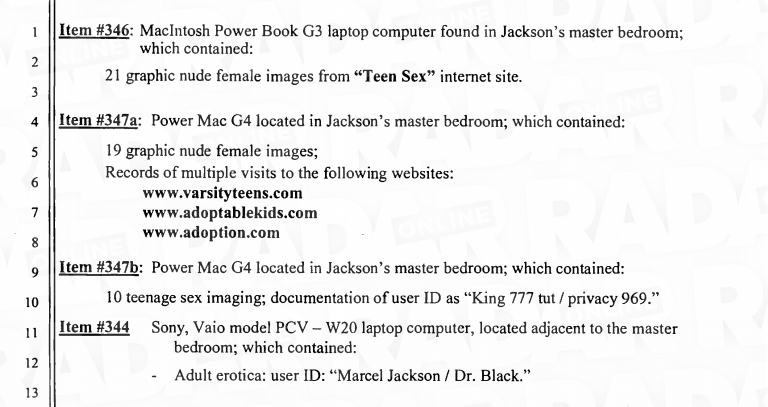