Just Three Albums Have Sold Over 1 Million Units This Year 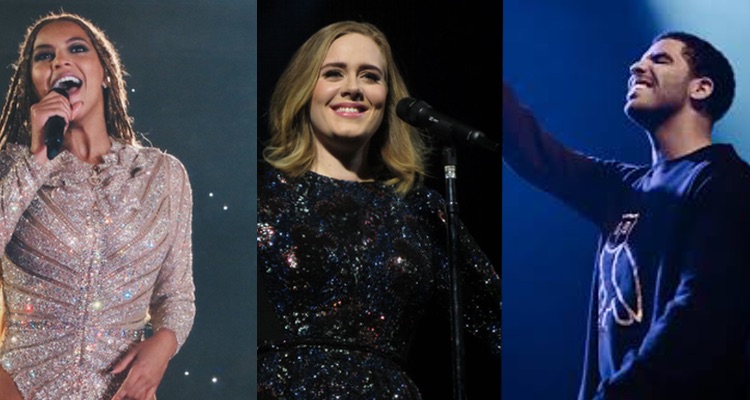 According to Nielsen Music’s mid-year report, only three albums have sold over 1 million units so far this year: Adele: 25; Drake: Views; and Beyonce: Lemonade.  That’s a sharp improvement over last year, but represents a drastic drop from earlier years, when dozens of albums easily hit the mark.

At the same point last year, the music industry only had one album reach this milestone: Taylor Swift’s 1989. In fact, in the whole of 2015 only two artists sold over 1 million units, part of a drab environment for once-lucrative, bundled album releases.

What did these artists do to hit that milestone?

’25’ was the most popular album of 2015. Just to highlight how successful the album was, the hit single ‘Hello’ hit a billion views on YouTube in just 87 days – a new record that was previously held by PSY’s ‘Gangnam Style’.  In its second week  ‘25′ became the first album ever to sell more than a million copies in two different weeks, and it did the same in its third week – that’s three million-selling weeks.

How did Adele achieve this? Adele windowed the album from streaming services, and it only recently became available to stream on both Spotify and Apple Music – over a half a year after the album was officially released, and after most of the biggest profits have been made. By windowing the album, Adele managed to get her fans to either purchase the album in a physical of digital format, as there wasn’t other way for her fans to listen to the album.

Lemonade was released as Tidal exclusive in April this year, and since is still not available on any other streaming service. By making the album an exclusive, like Adele did with 25, Beyonce fans had few options to listen to Lemonade it was either download Tidal to stream the album or buy the album, so this prompted people to either purchase a physical or digital copy.

Drake windowed Views, by making the album an Apple Music streaming exclusive. Though, the album became more widely available to other streaming services not too long after. However, despite it only being windowed for a short period of time, some music fans do not want to wait in order to listen to their favourite artists new music.

For Spotify and Tidal subscribers, or users of other music services purchasing the album is easier and less complicated than signing up to Apple Music in order to listen to the album and having to remember to cancel the subscription when the trial period is over.

In every case, these artists are making their music less available, and choosing one platform to release.  Ultimately, these albums reached the million-mark, though exclusives may not have been the determining factor.  But perhaps it played a part in getting music fans to actually purchase their albums as opposed to using streaming services, especially free services like YouTube.