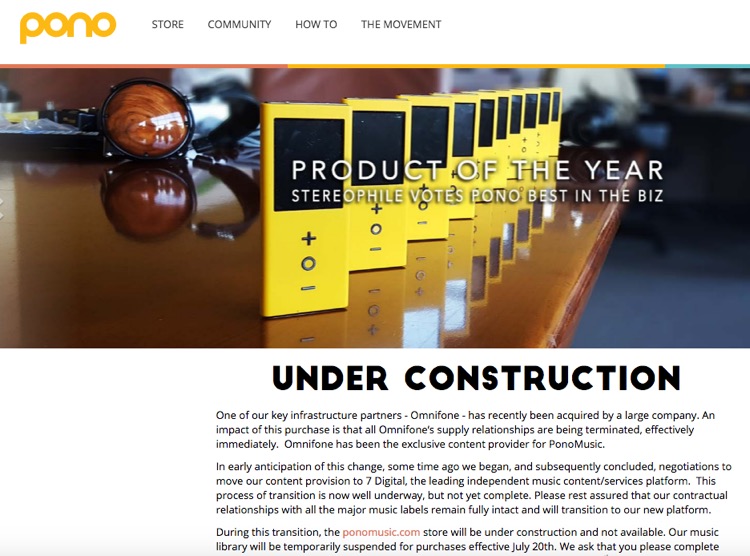 Beginning of the end for Neil Young’s Pono?

Pono’s companion music site, at ponomusic.com, abruptly went down over the weekend with apparently zero warning to users.  According to details now posted on the site, a broad range of higher-end downloads will be completely unavailable for several weeks, with no firm return date.

In a notice posted online, Pono blamed a backend problem with Omnifone, which has now been acquired.  Apparently the rugged got ripped out under Pono’s music hosting and delivery as a result, with the company scrambling to move backend providers.

Whether Omnifone reneged on a deal as a result of its acquisition, a renegotiation flatly failed, or some fight broke out between the companies is unclear.  Either way, Pono believers are now paying the price.  In a notice that has now replaced an entire store of higher-end downloads, Pono assured users that its core licensing with major labels remains in place.  But storing, delivering, and encoding all of those songs is the responsibility of the service, with Pono opted to outsource.

Bigger services like Spotify, YouTube, SoundCloud, and Apple all handle their backend storage and delivery internally.  Pono has raised more than $12 million since a splashy Kickstarter several years ago, but has made little impact since then.  Quite the opposite: in the past two years alone, downloads have cratered, while streaming has entered an extreme growth phase.

That leaves a possible niche for high-end downloads, though Tidal seems to be filling that need with its premium streaming tier.  Strangely, Neil Young released his latest album exclusively on Tidal, before Pono.

This is the notice to users, posted underneath a 90s-style ‘Under Construction’ heading:

“One of our key infrastructure partners – Omnifone – has recently been acquired by a large company.  An impact of this purchase is that all Omnifone’s supply relationships are being terminated, effectively immediately.  Omnifone has been the exclusive content provider for PonoMusic.”

“In early anticipation of this change, some time ago we began, and subsequently concluded, negotiations to move our content provision to 7 Digital, the leading independent music content/services platform.  This process of transition is now well underway, but not yet complete. Please rest assured that our contractual relationships with all the major music labels remain fully intact and will transition to our new platform.”

As for a return time, that sounds like anyone’s guess.  For now, a rough timetable of ‘several weeks’ will have to suffice.  Meanwhile, 7digital undoubtedly has Pono by the balls, given the urgency of the replacement situation.

“With our partners at 7 Digital, we will determine the timeframe of this transition. Right now, we believe this transition process will take several weeks to achieve.  In the meantime, please stay connected to the site and the community and keep listening to and enjoying the music you have.  This transition is our highest priority and will remain so until we are live again and providing our customers with seamless access to music in the highest quality available.”

More as we learn more.

Written while listening to Miles Davis.