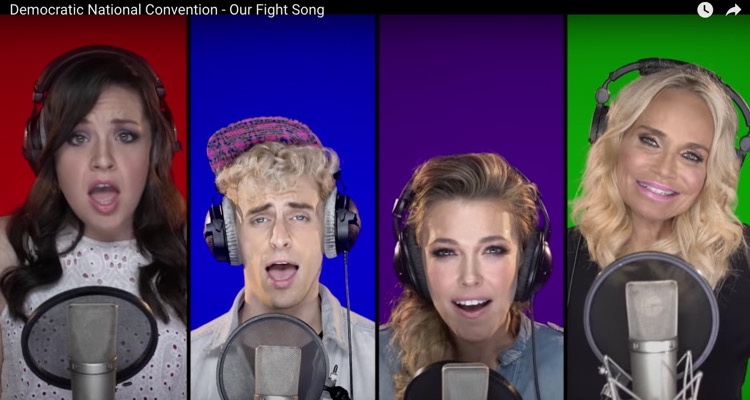 It’s called the ‘Fight Song,’ and it’s dedicated to electing Hillary Clinton keeping Donald Trump out of the White House.

Desperation is said to be stinky cologne, but what does it sound like?  Enter the just-released the ‘Fight Song,’ which features a deep cast of celebrities and musicians all enthusiastically backing Hillary’s bid for president.  Driven by actress Elizabeth Banks, the song was produced by Bruce Cohen and Mike Thompkins and is based on Rachel Platten’s earlier-released hit by the same name.

The song was released shortly after Clinton accepted the Democratic Party’s nomination to be their candidate for president, a process marred by strife and discord.  Indeed, very bad things are weakening an already troubled Clinton campaign, with Trump steadily gaining steam as the frontrunner.

This was supposed to be Hillary Clinton’s shining moment, though things aren’t suddenly heading southward.  Amidst leaked internal emails and promises of more ahead, the Democratic National Convention devolved into a charged atmosphere of conflict, with supporters of Bernie Sanders alleging corruption and fraud on the part of colluding Democratic insiders.  Against non-stop booing and protests, Sanders tried repeatedly to lead his faithful to back Hillary, if for no other reason than to defeat Donald Trump.

That may be a driving motivation behind the ‘Fight Song,’ a video that puts a happy, smiling face on a messy campaign.  But will it work?