Two-Thirds of All Music Sold Comes from Just 3 Companies 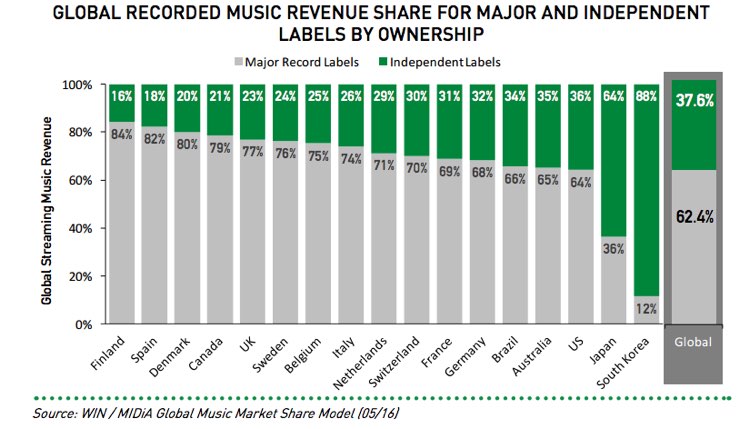 There are hundreds of record labels in the world.  Three of them sell most of the music.

Despite massive disruption and upheaval over nearly two decades, the recorded music industry remains highly concentrated at the top.  According to data released by independent label group WIN, an astounding 62.4 percent of all music sold, downloaded, and streamed worldwide comes from just three major labels, in 2016.  In the United States, that figure is 64%, and a lopsided 77% in the UK.

The three major labels — Sony Music Entertainment, Warner Music Group, and Universal Music Group — are currently enjoying a surge in streaming revenues from companies like Spotify and Apple Music.  Spotify and other streaming services, in turn, are paying the greatest percentage of their royalties to the majors.  According to some estimates, the ‘Big Three’ command more than 80% of streaming royalties from Spotify, Tidal, Apple Music, and others.

The breakdown shows extreme variations in the marketshare across different countries.  Market concentration in markets like Finland, Spain, and Denmark, for example, are extreme, with the three major labels accounting for greater than 80% of all sales.  That pendulum swings wildly in Japan and South Korea, where independent labels and companies enjoy far greater marketshare and control of both J-pop and K-pop markets.  In South Korea, the three major labels control just 12% of recorded music sales, streams, and downloads, according to the data.

The breakdowns, calculated in May of this year, demonstrate the surprisingly strong staying power of the majors, a group widely expected to be extinct after the advent of Napster, file-sharing, iTunes downloading, and most recently, torrenting and streaming.  Recording sales have indeed dropped precipitously over the past 15 years, though majors have retained a strong grip on shrinking market.

That said, smaller, independent labels seem to be gaining some ground in the streaming realm.  That is happening in nearly every country worldwide, according to WIN.  That effect is particularly pronounced when comparing streaming to physical CDs, which require larger capital outlays for production, distribution, and product placement. 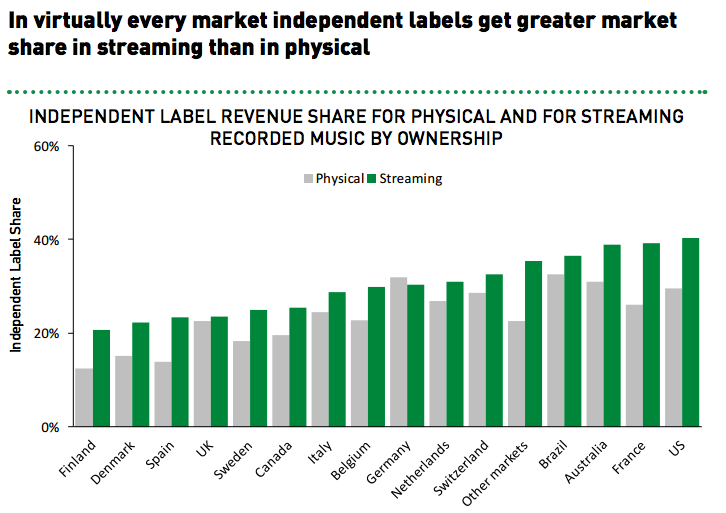 Whether that leads to greater marketshare over time is hard to gauge.  Of course, streaming is surging and CDs are tanking, though the wildcard here is the plunging download.  According to stats from Nielsen Soundscan and financial reports from Sony Music Entertainment, song download sales from places like the iTunes Store are start to crater, with double-digit declines recorded during the first half of 2016.  That could rob independents of a valuable revenue source, as downloads offer a larger, upfront royalty payment that requires less accounting and tracking.

But this is still a multi-billion dollar business for independent labels.  According to WIN, indies counted revenues of $5.6 billion last year, with streaming accounting for $1.1 billion of that.  In terms of broader marketshare, indies controlled 37.6 percent or revenues worldwide, with 7 different independent labels counting annual revenues of more than $100 million.

But that latest stat speaks to further lopsidedness amongst the largest independents.  And when it comes to the ‘Big Three,’ the numbers are comparatively enormous.  In total, Sony, Universal and Warner commanded revenues of nearly $9.3 billion, according to a simple calculation based on WIN stats, which means that just 10 companies are earning more than $10 billion out of a total recorded industry pot of $14.9 billion.

Here’s a look at the source data from WIN.