Why Tech Is Eating the Music Industry 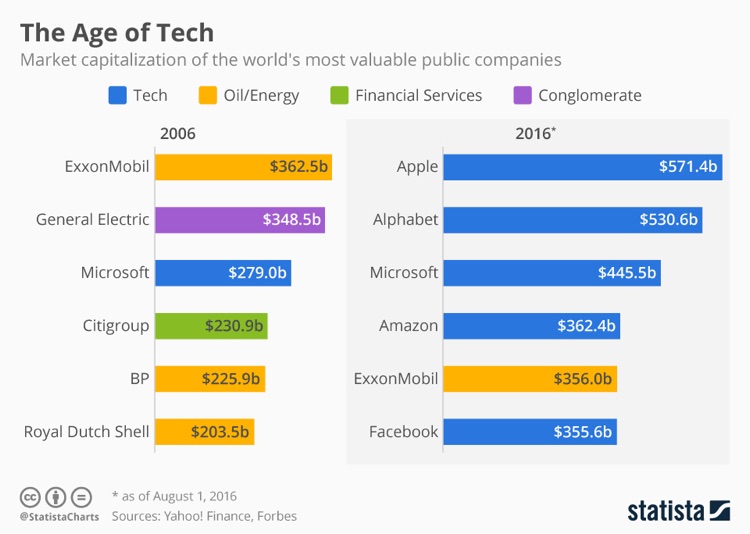 5 out of the top 6 most powerful companies in the world are ‘tech’.  Zero out of the 6 are music or media companies.  Any questions?

The most powerful companies in the world are now solidly categorized as ‘tech,’ according to a simple ranking based on market capitalization.  More importantly for the music and media industries, none the top-ranked companies are even remotely tied to the creation of content, with Amazon perhaps one fringe exception.

That disparity continues to explain a string of losses by the music industry against powerful tech interests, with major labels like Universal Music Group shockingly outgunned in Congressional, regulatory, and competitive arenas.

The breakdown, compiled by research group Statista using stats from Yahoo! Finance and Forbes, shows a glaring displacement over the past ten years.  Back in 2006, energy companies dominated a more diversified cast that also included tech, banking and other business categories.  Fast-forward to 2016, and it’s almost all tech, with ExxonMobil — one of the most profitable companies in the world — ranking a modest fifth behind tech giants Apple, Alphabet, Microsoft, and Amazon in terms of market capitalization.

All of those companies, including a sixth-ranked Facebook, are now critically important to the financial well-being of both music companies and artists alike.  Apple and Alphabet, the two highest-ranked companies, arguably exert more control over the music industry than the most powerful music industry players, including UMG, Sony/ATV, and even Live Nation.

That stunning ten-year span has also paralleled a massive decline in the revenues enjoyed by the music industry, with once-powerful categories like recorded music plunging amidst massive online devaluation.  But the rise of the tech class also helps to explain why the music industry keeps losing its battles involving Congress, regulators and consumers, with tech’s massive lobbying and public relations army difficult to defeat.  Just recently, the publishing industry was handed a stunning blow by the US Department of Justice, which refused to relax strict, government-controlled licensing restrictions viewed as favorable to tech interests.

That debate was mostly unimportant to the music fan, though other spats have become more public.  Perhaps signaling a level of desperation, massive music companies and superstars like Taylor Swift are now waging battles against dominant tech powerhouses like Apple and Alphabet, both of whom wield massive influence over the welfare of artists.  Last year, for example, Swift launched a high-profile jab against Apple for refusing to pay artists during the trial phase of Apple Music, a move that quickly caused Apple to reverse course.  But just weeks after the dust settled, leaked contracts revealed that per-stream payments on trial subscriptions would remain paltry at $0.002 a stream, with subsequent royalty statements showing even lower payouts.

Apple, with a market capitalization of $571.4 billion, is ranked the most valuable company in the world.  Apple Music, launched in 2015, has quickly become one of the most important streaming music services with more than 15 million subscribers.