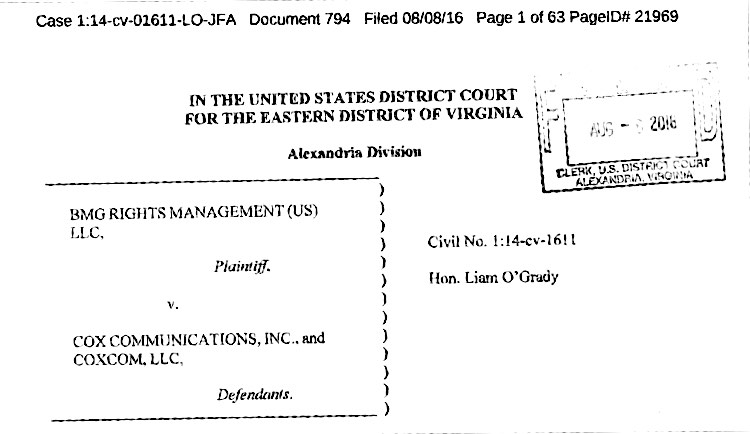 The decision means a lot more than $25 million to Cox Communications, and could have serious repercussions for ISPs nationwide.

A federal judge has firmly upheld an earlier, $25 million infringement penalty against Cox Communications, one of the largest ISPs in the US.  The decision, issued by a jury late last year, found Cox guilty of willful and contributory copyright infringement.  That represented a monumental precedent against Cox and similar ISPs, a group that had previously avoided liability for content piracy on its networks.

The case, brought by BMG Rights Management with heavy involvement by anti-piracy firm Rightscorp, dismantled a carefully constructed defense by Cox.  That included heavy reliance upon DMCA loopholes and ‘six strike’ policies, a combination that effectively let infringing, high-paying broadband subscribers off the hook.  Cox, like many other ISPs, has routinely argued that it merely offers a passageway to the internet, good or bad, and its compliance with the Digital Millennium Copyright Act offers it ‘safe harbor’ from illegal downloading and sharing.

But multiple internal emails that surfaced in the case told a different story.  Instead of merely providing access, Cox executives were found to be reinstating obviously infringing users, while relying on a ridiculous DMCA charade.  In the end, Cox was refereeing a game that was essentially a piracy free-for-all.

Since the jury ruling, Cox had been petitioning for a review of that decision, including a brand new trial.  That has been solidly denied by US District Court judge Liam O’Grady, who has been presiding over the case.  O’Grady largely slammed Cox’s attempts to wriggle out of the $25 million bill, though the ISP will not be required to monitor its own users via deep packet inspection.

Looking ahead, the decision is now expected to have a massive impact on internet access providers across the US.  “In reaching this conclusion, the Court acknowledges that the application of traditional contributory infringement to large intermediaries like Cox magnifies the uncertainties in this area of the law and raises the specter of undesirable consequences that may follow,” O’Grady opined.

“This case may provide the vehicle for consideration of those questions.”