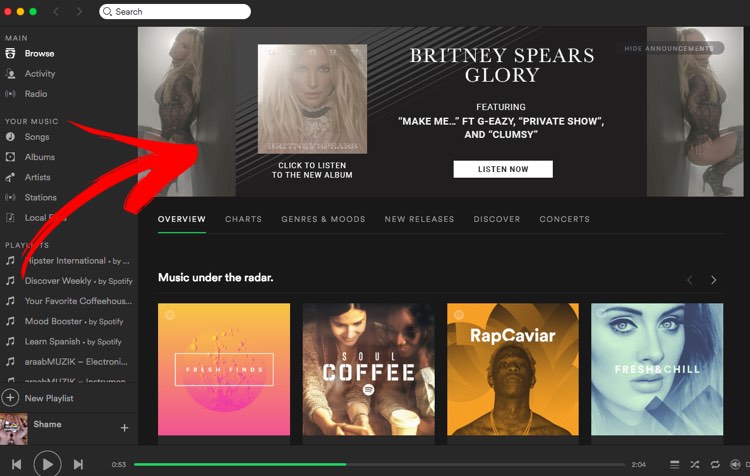 Britney Spears is now getting double the promotion — and half the piracy — thanks to an escalating pissing match between Apple Music and Spotify.  The drama started when Britney Spears backed out of an exclusive release arrangement with Apple Music, despite a massive advertising and promotional push by Apple.  That included a pricey, pre-VMA television spot featuring Kevin Bacon, one that featured her new album (playing, of course, on Apple Music).

That’s still a mere theory, reported heavily but denied by Spotify.  Either way, Britney is now enjoying the complete opposite of a Spotify retaliation, and undoubtedly racking up streams in the process.  Instead, Spears’ latest album, Glory, is receiving heavy promotion within Spotify’s app, staring with the lead single, “Make Me,” featuring rapper G-Eazy.  The blitz is unaided by search, and could be complemented by heavy Spotify playlist inclusion (something notably absent on Katy Perry’s latest single, Rise.)

Whether Spears masterminded that result is doubtful, though Frank Ocean seems to have shrewdly played Apple and Universal Music Group.  After a botched Apple exclusive and a contract-evading double-album release, Ocean now appears to be earning millions from his label-free, chart-topping ‘Blonde’ album.

Meanwhile, Spotify’s curated playlists are now generating billions of streams monthly (with one billion streams now processed daily).  Separately, research continues to show that streaming playlists are a predominant method for both discovery and overall listening on streaming services, with Spotify’s hand-crafted playlists a promotional pushed a big part of that picture.

And how about the album itself?  It’s actually not too bad, and surprisingly consistent with earlier quality.  Longtime Spears fans will probably be delighted.