How Many Streams Does It Take to Earn $1? Take a Look… 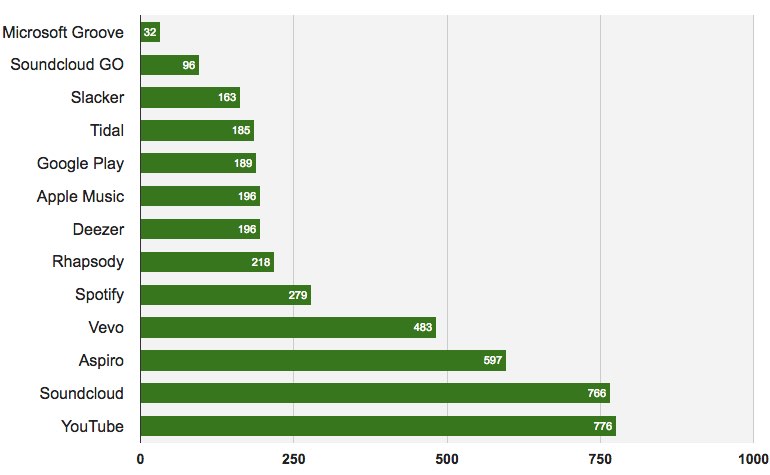 What does streaming music pay in 2016?  That’s becoming an increasingly tricky question.  But here’s the latest breakdown from an artist royalty report.

It takes 776 streams on YouTube to earn a dollar, and just 32 on Microsoft Groove.  On SoundCloud, you’ll need 766 streams to earn $1, while it only takes 96 from the SoundCloud GO premium service.  In between, there are streaming music services Spotify, Apple Music, Deezer, Rhapsody, TIDAL, Google Play, and VEVO, all paying wildly different sums for the same exact song.

Why the polar extremes?  We’ve been receiving — and posting — lots of streaming payout information on Digital Music News, only to learn that payouts aren’t normalizing over time.  Instead, they’re become more divergent over time.  Just recently, an independent hip-hop and r&b label shared an entire statement with Digital Music News, one showing multi-dollar payouts from Microsoft Groove (via Xbox), and almost worthless payouts from YouTube (take a look).

A few quick notes on this data.  TIDAL is part of Aspiro, acquired by Jay Z last year, but we’ve noticed in statements that ‘Aspiro’ usually refers to the older service, and ‘Tidal’ the newer service, with payment lags to blame.  Tidal has received lots of complaints over delayed payments, but the actual payouts seem to be on the upper range of competitors when they do arrive.

Also, this doesn’t have anything from YouTube Red, which is a recently launched premium service.  The scattered data we’ve gotten on YouTube Red shows higher per-stream payouts, but total subscriber levels are rumored to be extremely low.  The same applies to SoundCloud Go, which is SoundCloud’s premium attempt, though interestingly, GO is now starting to appear on royalty reports.

Keep in mind that Apple Music is entirely subscription, though payouts on the three-month free trial are markedly lower.  Spotify also has a free and paid tier, with the paid tier paying multiples over the free tier.  Unfortunately, those tiers weren’t broken out in this royalty statement.

Got a statement to share?  Please help the artist community and send it over to [email protected]  Complete confidentiality assured.