How Did Eazy-E Die? Allegations of a Cover-Up Continue 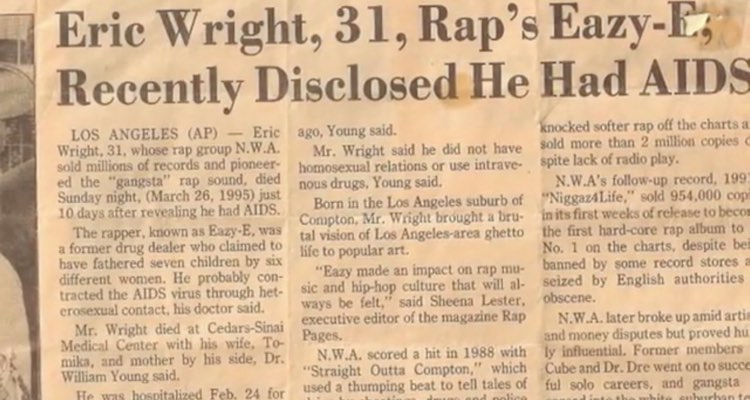 A headline following the death of Eazy-E in 1995.

Eric ‘Eazy-E’ Wright was officially pronounced dead from complications related to AIDS, specifically AIDS-induced pneumonia, on March 26th, 1995. But how did Eazy-E really die? Here’s a closer look at the unresolved questions surrounding the rapper’s death.

It was more shocking than any gangsta rap lyric could ever be. On March 17th, 1995, one of the biggest figures of gangsta rap announced that he had contracted AIDS. Suddenly, in one stunning moment, Eazy-E’s aura of invisibility and power came crashing down.

At a Hollywood news conference, Eazy-E’s attorney and friend, Ron Sweeney, shared the grim news with the world.  Sweeney unfolded a crinkled piece of paper, and in a somber tone, offered the statement of fact.  “I’m not religious, but right or wrong, that’s me,” Sweeney read, relaying a message written by the rapper.

“I’m not saying this because I’m looking for a soft cushion wherever I’m heading. But I’ve got thousands of young fans that have to learn about what’s real when it comes to AIDS. I’ve learned in the last week that this thing is real and it doesn’t discriminate. It affects everyone.”

But two decades after his death, Eric ‘Eazy-E’ Wright remains one of the most controversial rappers in history.  Called the ‘Godfather of Gangsta Rap,’ Eazy-E reshaped hip-hop, starting with N.W.A.  Other successful rappers, including Bone Thugs N’ Harmony, owe their start to Wright.

The list also includes Kendrick Lamar, who has cited Eazy-E as an important influence.

The public both loved and loathed Eazy-E, with extremely violent and misogynistic lyrics drawing criticism.  But without Eazy-E, the rap world might look substantially different today.  In fact, we may have never heard of rappers like Dr. Dre and Ice Cube.  And the trajectory of ‘gangsta rap’ would have been entirely different.

Despite being mired in controversy, Eazy-E’s legacy remains massive.  But while he was alive, Eazy-E’s life resembled a war zone.  The rapper had dangerous beefs involving rival members of N.W.A, most notably Dr. Dre and Ice Cube.  Those eventually ebbed, though the list of other sworn (and armed) enemies was extensive.

Simply put, a lot of people wanted Eazy-E dead.  Others had outright threatened to murder the Compton rapper.  And like many high-profile gangsta rappers, the threat of death and violence constantly hovered.  It came with the lifestyle.

So how did Eazy-E really die?

Eazy-E’s daughter, Ebie Wright, has been attempting to answer that very question.  Last month, she started raising funds to launch a serious investigation into this issue.  Ebie simply disagrees with the long-held belief that Eric Wright contracted AIDS through unprotected sex.  And many in the hip-hop world agree.

In September of this year, Ebie Wright initiated a Kickstarter campaign seeking $250,000 to investigate the real story.  The documentary, titled A Ruthless Scandal: No More Lies, aimed to unravel a conspiracy around Wright’s death.  “Now I know you’re all thinking.  Didn’t Eazy-E die of AIDS?” Wright stated on her pitch video. “So what scandal was there, right?'”

“Well, if he did die of AIDS, why was there so much cover up surrounding the details of his death?”

What were the elements of the cover-up?  In the video, Ebie laid out the following issues, all of which suggest a coordinated effort.

All of which suggests a coordinated attack by a group hostile to Eazy-E.  And, a coalition that stood to gain from the rapper Eazy’s death.

Magic Johnson survived AIDS. So why did Eazy-E die so quickly?

Eric Wright’s death was astoundingly quick, even for someone suffering from the virus in the 1990s.  Fans were quick to contrast Eazy’s fate to that of Earvin ‘Magic’ Johnson, who was found carrying HIV in 1991.  After discovering the virus in November of that year, Johnson told the world and retired from the Los Angeles Lakers.

But Magic was still alive nearly four years later.  Of course, he’s still alive today.  Even Arthur Ashe carried HIV for more than five years before passing away in February of 1993.  So how is it possible that Eazy-E succumbed to the illness so quickly?  According to Ebie, the short window fuels suspicions of a murder.

One longtime theory is that the conspirators used a purposeful, lethal injection.  That includes the belief that Eazy-E was injected with HIV after suffering a motorcycle accident.  “I think they were giving him tainted needles with the AIDS virus through acupuncture,” said Frost, a Ruthless rapper.  “Because how else could somebody die that fast of AIDS?”

“Have you even heard of somebody dying in two weeks of AIDS bro? Come on, man. It’s unheard of, bro.”

Here’s the interview with Frost, which offers a telling revelation from someone close to the situation.  Frost was part of the documentary, For The Record: The Story of Latinos in Hip Hop.

But is Frost’s theory plausible?  Wilmore Webley, a microbiologist at the University of Massachusetts Amherst, argues that acupuncture rarely punctures deeply enough to inject HIV.  On top of that, the needles themselves probably couldn’t carry enough blood to transmit the disease.

But that is only one possible theory.  A malicious injection may have been the real murder weapon.  And it’s just as deadly as a gun.  But who administered the poison?

Marquis Wright, aka Yung Eazy, has a different idea.  The rapper Eazy’s surviving son alleges that Suge Knight coordinated the murder, and even bragged about it.  Marquis cited a recent interview between the notoriously violent rap manager and Jimmy Kimmel:

Suspicions still run deep in this case, with others suspecting a coordinated conspiracy to murder the famous (and wealthy) rapper.  Jerry Heller, former manager of N.W.A and a longtime confidant of Eric Wright, has openly questioned the quick death.  “Do I think that something fishy happened to Eazy? Absolutely,” Heller stated in an interview before dying himself.  “I don’t believe that someone who had as much money as we did, and could afford whatever Magic Johnson could…

“How did Eazy-E die?  I don’t believe that he could have possibly died that quickly from full blown AIDS.” 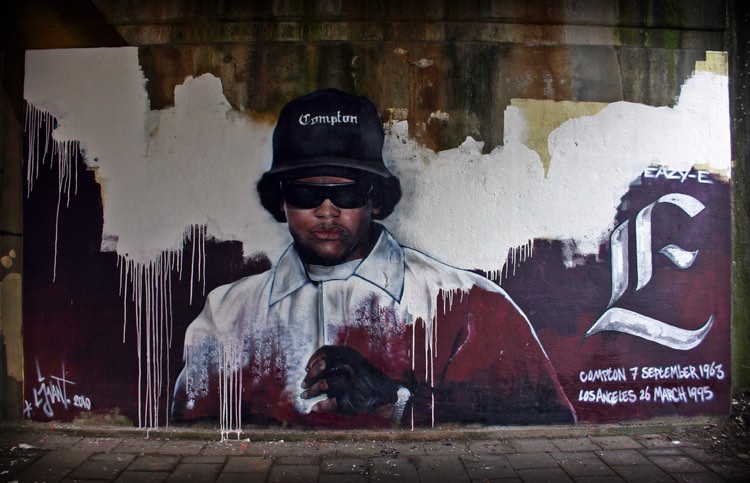 A street art memorial dedicated to Eazy-E in the Netherlands.

Others agree, noting that AIDS simply doesn’t kill that quickly.  Eazy-E simply went too fast, with too few symptoms.  Among the leading skeptics are rapper B.G. Knocc Out, who collaborated with Eazy-E in the years leading up to his death.  Most notably, B.G. appeared on the Eazy-E track, “Real Muthaphuckkin G’s,” released in 1993.

B.G. also toured and recorded with Wright during that period.  And according to B.G., Eric Wright appeared healthy for most of the last three years of his life.  “I believe in my heart somebody did something to Eric,” B.G. told Hip Hop DX.

“Whether it was Jerry [Heller], whether it was [his widow] Tomica [Woods-Wright], I have yet to really know the truth.”

B.G. has witnessed the illness firsthand, and noticed some glaring discrepancies.  “My little brother, his father died from full-blown AIDS,” B.G. continued.  “From sharing a needle, because he was an addict.  Now, I’ve seen this man go through these stages, from HIV to full-blown AIDS.  And, when you get a cold, any little thing like that, your whole immune system shuts down.  So you have to go into the hospital just to recover.”

“Who are you kidding?”

Compared to Eazy-E, it just doesn’t make sense.  The symptoms and overall timeframe were glaringly different.  “Now, I was around Eric for the last three years of his life.  He never had an episode like this — never, ever.  So something is strange.  And then, you’re going to tell me that when this man goes in there for bronchitis, he has full-blown AIDS?”

“We’d been to New York, we’d been to Chicago in below-zero weather.  He never got sick.  He never had an episode.  Like, c’mon. Who are you kidding?”

After the diagnosis, B.G. visited the rapper on this deathbed.  But visitation restrictions were quickly increased, while the rapper was relocated.  Soon, it became impossible to visit anymore.   All of which augments information from Ebie, who pointed to a sequestered location within the hospital.  That relocation may have been created to keep others out

But who were the conspirators? And what really happened?

Problematically, these events transpired more than twenty years ago.  And that makes it incredibly difficult to unearth records and communications pertinent to the case.  Authorities like the LAPD have not followed any leads, and this case has long gone cold.  Statutes of limitations also start to apply after longer periods of time, making this an incredibly difficult undertaking.

Another major complication is the death of Heller himself, who recently passed at age 75.  Heller undoubtedly had knowledge and resources to properly pursue this matter.  But Ebie indicated that a number of Wright’s older associates are now willing to speak out.  Many of those come from within the hip-hop community.

In the end, Ebie asserts that this was a murder, not an accidental death.  And she aims to show that in the film.  “I don’t believe the explanation is as simple as ‘my father had AIDS and died’,” Ebie explained.

“There was definitely something fishy about it.  This was murder by AIDS.  I really believe that.”

“There are so many rumors, so many stories, and crazy conspiracy theories out there,” Ebie continued.  “But everyone has come to their own conclusion, without knowing all of the facts that this documentary will reveal.”

Despite trying to raise $250,000 for the investigation, Ebie’s campaign only raised $2,850.  Only 63 backers participated.   That is roughly one-percent of the overall goal, and not enough to finance a serious probe.

Undeterred, Ebie has now re-started the campaign.  The Game has also stepped in to endorse the effort, which could help the initiative.  “Yo…. I want everyone to know I’m supporting Eazy’s daughter Ebie’s Kickstarter campaign to produce her documentary, “A Ruthless Scandal”.  It’s about her father Eazy-E’s death,” the Game offered on his Instagram.  “It’s a super important documentary to her and she’s also doing it for Eazy’s fans!  Y’all know I got love for Eazy so let’s get some pledges on her Kickstarter and raise this 100k.”