Here’s a new interactive breakdown of the biggest artists, tracks, and albums on Spotify over the past two years.  Sizzle Analytics is behind the concept.

Pretty cool, right?  The Spotify breakdown was created by Sizzle Analytics, after pulling data from spotify.com and spotifycharts.com.  It’s sort of a beta experiment, and the company is looking for feedback.  “This is a new tool and we are looking for feedback,” said developer Aaron Hoffman.  “Please let me know what features you’d like us to add!  The tools used are: d3.js, crossfilter.js, dc.js, and the sizzleanalytics.com designer.”

Basically, Hoffman used Spotify APIs to compile a huge amount of stats, including stuff like Song Tempo, Key, Label, Genre, and even Artist City (no wonder Toronto tops the list).  Actually, here’s a quick, static image of the breakdown, if you prefer something with a little less ‘sizzle’: 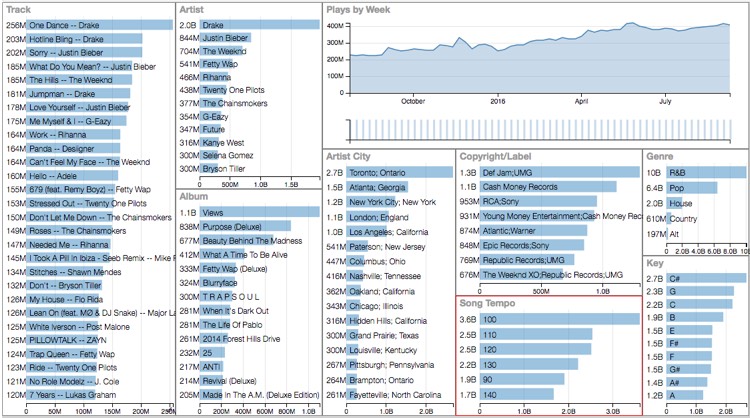 Interestingly, the chart shows an extreme dominance of just a few artists, particularly from more mainstream, major label artists.  Indeed, the top 8 labels are either major labels, or distributed through major labels.  The top-heavy artist list includes Drake, but also artists like Justin Bieber, The Weeknd, Rihanna, Fetty Wap, and Desiigner, all of whom get serious promotion on Spotify’s interface.

A missing piece is the influential playlist, a critical ingredient for the success of most of these chart-topping artists.  Indeed, playlists are now bigger than albums, according to research that now confirms the marked shift.  There’s also a lot of evidence pointing to ‘playlist payola,’ with growing attention on possible ‘pay-for-play’ streaming playlist inclusion.

That said, albums still play an important role in music, though far fewer listeners are simply listening to albums end-to-end.

In terms of key… C#?  That was another big question that cam up.  As in, why is this difficult key signature the most dominant, behind seemingly easier keys like G, C, and B?