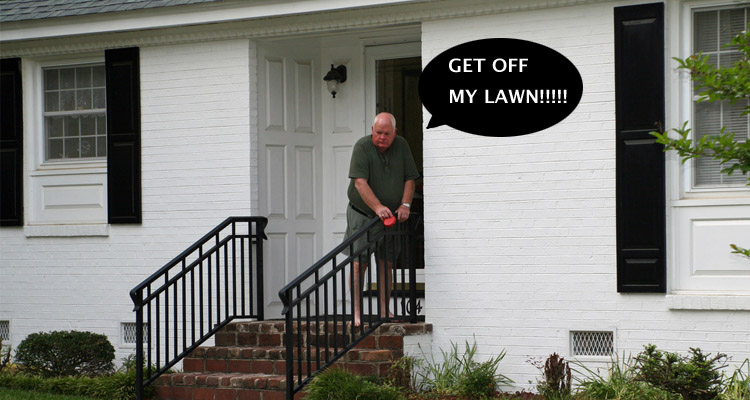 Old business heads who cling to the past and have no vision for the future. They know what the music business was in (what they think were) the glory days and desperately are trying to return to that era. Make the music business great again!

Just one problem. The music business was never truly great for artists and no matter how hard you try to move backwards, through frivolous lawsuits (see Lowery v Spotify) or take down notices (see Facebook / UMG), we’re never returning to the days of sleazy record men, ignorant artists, opaque accounting practices, plastic discs, clunky file transfers or, how can I put this, no internet.

You’re being ignorant, shortsighted and closed minded to think that the way to solve the future (and the present) is to stand by laws of the past.

What am I talking about?

Well after I posted Facebook Is Aggressively Ripping Down Cover Videos, David “Get Off My Lawn” Lowery wrote “David Benjamin (UMG) Stands Up To Facebook for Songwriters, Ari Herstand? Not So Much.” And synch-license music library company owner, Matt Thompson, wrote a self-serving piece on DMN, “Stop Blaming The Victim of Facebook’s Blatant Copyright Theft.”

Do not conflate the two. What most people don’t realize is that when major publishing companies and major labels strike deals with new platforms like YouTube, Spotify and Soundcloud, they get these platforms to pay them huge ‘advances,’ guarantees and sometimes even equity in the company that never finds its way down to songwriters or artists they supposedly represent. UMG is trying to shake down Facebook to pay UMG. They don’t give two f*cks about songwriters.

The majors historically (and currently) have always found ways to screw their artists any which way they can.

It’s not even a secret. They don’t care about their artists. If they did, they wouldn’t trick them into signing blanket deals that entitled them to zero streaming money. If they did, they would be completely transparent with their accounting and show their artists and songwriters where every single penny comes from. Instead, when questioned on accounting, the majors hand over thousands of sheets of (physical, unsearchable) paper in small font with millions of lines of data and say “here you go!”

Songwriters and artists are finally understanding they don’t need the majors to have a major career. That’s why so many are fleeing them for Kobalt, CD Baby, DistroKid, Tunecore, SongTrust and others who offer complete transparency, no ownership and low commissions.

Ok, let me break this down for people who aren’t following the play by play, day by day.

Basically, to recap, to legally synch a song to a video, you need a synch license. There is not a government-set rate for this like there is if you just want to release a cover song (without video). To release a cover song, you don’t need permission. You just need to pay the compulsory statutory rate for the license. Every synch, however, needs to be negotiated on a case by case basis. This worked fine and dandy when the only synchs were TV shows, movies and commercials. But now that everyone is an iPhone film maker and their own studio owner with YouTube, Facebook, Instagram, Snapchat, Vine, etc as their network, it is virtually impossible for every creator to negotiate directly with a publisher for each cover video they want to post. Believe me, I’ve tried. The majors don’t have the time (or desire) for this.

So, there have been patchwork fixes for this like what We Are The Hits is now doing – which has struck deals with all major publishers and many indies to license and monetize cover videos on YouTube.

But remember, YouTube wasn’t licensed for years and was ripping down fan videos until they realized it was only helping promote their artists’ work.

YouTube created Content ID which could catch most of the songs and slap ads on them or remove them (most publishers and labels chose to put ads on them and start earning revenue from the fan videos). Remember, though, every video was illegal until it was caught by Content ID and the publisher and/or label agreed to put an ad on it.

Yes, YouTube has licensed every major label and publisher. And YouTube did this by paying them massive advances and guarantees. You wonder why you never get ad revenue reports from international views? It’s because of the advances paid to the major publishers.

But (it seems) Facebook has no agreements with anyone yet. At least it’s not public if they do. So, yeah, Universal is fully within their rights to ask Facebook to rip down every cover video. Whether it’s your daughter’s 3rd grade class singing a song from Hamilton or an emerging artist posting a cover of them playing a DNCE song in their bedroom. Or Taylor Swift singing along to Kendrick Lamar (which by the way, her video not only infringes on the copyright of the composition but the sound recording too!). Why isn’t everyone roasting Taylor for her copyright infringement? Why hasn’t Interscope demanded Facebook remove Taylor’s infringing video? It has over 9 million views. Talk about infringement! Taylor could have afforded a synch license.

But that would have defeated the purpose of her video which was meant to capture a mood, in the moment and upload it immediately. You’re telling me Taylor Swift is ignorant to how synch licensing works?

That Taylor Swift doesn’t care about intellectual property? That goes against what she stood for when she pulled her music from Spotify and convinced Apple to pay royalties for their 3 month trial on Apple Music.

Is Taylor Swift a hypocrite?

You’re either saying that:

A) She didn’t know this was illegal (ignorance)

C) She thinks this kind of video should fall into a completely separate category for which the laws do not currently cover.

Pretty much every reasonable person would choose C.

Well, except Matt Thompson and David Lowery of course. But they’re not being reasonable. They are tying themselves to outdated philosophies and dogma. I have to applaud their commitment and consistency, though. They believe the same thing on Wednesday as they did on Monday, NO MATTER WHAT HAPPENED ON TUESDAY. (Thanks Colbert for that one).

It’s time to think differently. And move with the times.

What’s wrong and right in the music business? The reason I compared blocking emerging artists from their Facebook accounts to suing grandmas and tweens (in the Napster era) is because both were done by the majors ‘defending intellectual property’ and well within the rights of the majors to do. Well, within the laws currently in place. But was that right? The laws will never catch up.

This is corporate intimidation 2016 edition. Sure in 2006 it was suing fans. In 2016 it’s equally damaging, just done in a less blatantly offensive manner.

Stop using the laws as your moral compass.

It was the law that black people couldn’t drink from white drinking fountains, use white bathrooms or sit at the front of the bus. It was the law that women couldn’t vote. Were those laws right? They were the law. The reason the Songwriter Equity Act (to be able to negotiate for higher rates for songwriters and publishers from Pandora et al) has been introduced into congress (by PROs’ lobbying) is because PROs understand that the current laws in place don’t reflect the realities of the times and songwriters are getting screwed. The reason the #IRespectMusic movement (to get artists and labels paid from AM/FM radio plays) is lobbying congress to change the laws is because they realize the laws don’t represent the times.

So, laws aren’t always right. And they will always be behind the times.

That’s why I proposed a completely new way to think about how songwriters should be compensated. Without waiting for the laws to catch up.

Artists who don’t know any better are getting blocked from their Musician Pages – which is hurting their business a hell of a lot more than Universal’s or DNCE’s or any other major label / major publisher act whose work is being ‘infringed upon’ via fan-made videos.

It’s unfortunate that Lowery is so misguided in his crusade. He is now standing with corporations and against indie artists.

Oh how the times have changed. He used to be such an indie darling. Always damming the man. Now he’s trying to squash indie artists’ creativity and fighting for corporate rights.

All of these artists built their careers by posting cover songs online. And they were not making a living off of YouTube’s paltry ad revenue payouts.

The creators never actually made much from YouTube’s ad revenue anyway. You know who did make money? Publishers and labels. Again, because of the massive guarantees and advances AND because they just have the sheer volume of content.

This is why Jack Conte (of Pomplamoose) created Patreon. He had over 150 million YouTube views and wasn’t making a livable income from YouTube ad revenue. It’s easy to blame YouTube for low payouts, but it’s more accurate to blame the major labels and publishers for how they negotiated these deals to favor themselves (not artists or songwriters).

It’s time to get creative. Think differently. And break yourself from outdated dogma of what is ‘right and wrong’ in the new music business.