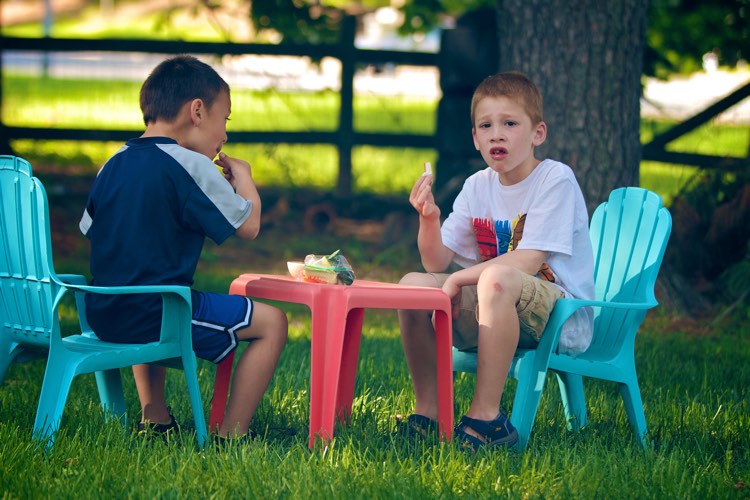 David Lowery is a longtime musician and crusader for copyright protection and artist rights.  Perhaps most famously known as the lead singer of 90s band Cracker, these days David Lowery is better known for battling big tech interests and content devaluation.

And, a person feared — at times — by tech-focused industry players like Spotify.  Not to mention other streaming music giants like Microsoft, Rhapsody, and Apple.

But one person that definitely doesn’t fear David Lowery is Ari Herstand.  And unfortunately, we’re learning an uglier side to this anti-tech warrior after a heated back-and-forth.  I’m not going to say Ari was perfectly professional here.  Ari fights hard.  But it kind of looks like Lowery can dish it, but can’t take it.

I guess it takes a big ego to go against well-staffed, intimidating tech giants like Spotify.  But egos have a way of stunting careers, wrecking relationships, and leaving a lot of damage.  That’s just been my experience.

These are extremely complex issues.  There’s no black and white, and that means there’s going to be lots of debate and conflict.  And Lowery responded to Ari’s piece on UMPG and Facebook with a strong response of his own.

“It’s worth reading Ari’s piece to understand that most young writers do not understand how these technology companies like Facebook manipulate public opinion,” Lowery noted on his blog, the Trichordist.

“They use their users as human shields to avoid paying licensing fees. ‘It’s our users doing this not us’.  This is exactly what Napster did; Google and YouTube do the same; and now it’s Facebook turn.   It’s getting really old. We’ve been hearing this crap since 1999.”

A tad condescending, but hey.  Did you really think Ari wasn’t going to respond back, David?

Maybe Ari is guilty of poking the bear.  Then again, Digital Music News has always been about airing strong opinions and battling things out.  And, calling people out.

DMN isn’t a kumbaya PC zone, it’s not a ‘safe space’.  And neither is the music industry, which is what we’re committed to covering.  It’s brutal out there.

Here are some of his tweets.  I think some of them were erased (updated: David Lowery just told DMN he didn’t delete these). 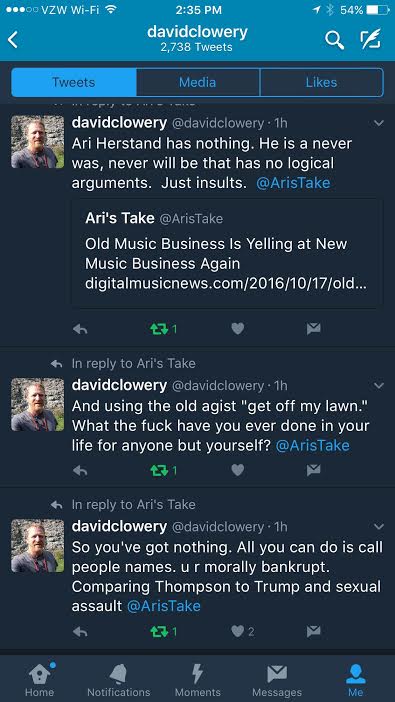 So this gets worse.

The thing is, Ari is well established in his own right.  He’s written countless articles and even a book; he has a loyal artist following.  He just spoke at CD Baby’s conference in Chicago.  He’s all about building the new business for emerging artists.  He’s a real performing artist, with real gigs, real sales, and a real career.

Which is exactly why he writes for DMN.

Did UMPG do the right thing by ripping down artist cover videos?  I have my own opinions on the matter, though this is a really complex debate.  Ari and David are actually on the same side, they just completely disagree on what’s best for artists and the future of this industry.

David even emailed me, telling me that Ari was giving DMN a bad name.  Telling me he’d lost all respect for me.  Others told me to erase the post, or post a retraction.  But that would go completely against the mission of Digital Music News.  We’re all about diving into every issue of importance for the music industry, because that’s really the only way to make sense of it.

Ari has strong opinions about this.  So does David.  Our readers can figure out their own opinions.  But at least they’ll know the issues before they form their strategies.

That’s what this publication is all about.  And if you’re going to get butt-hurt just because someone disagrees with you, then go read Billboard.

This isn’t for you.