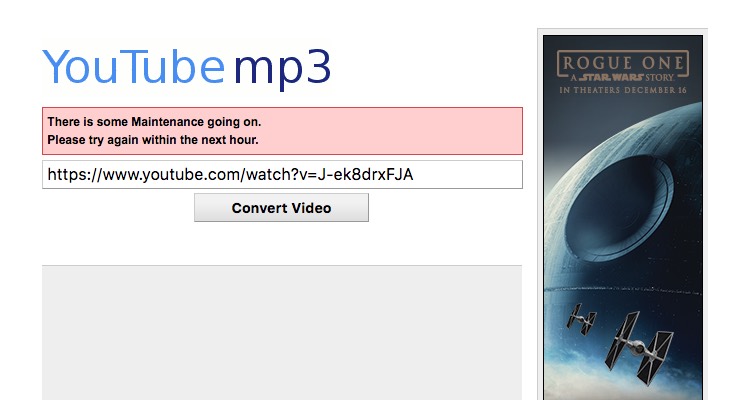 Philip Matesanz, the intriguing German programmer who created the YouTube to MP3 converter YouTube-mp3.org, has yet to respond to a lawsuit filed by the major record labels, a representative of the Recording Industry Association of America (RIAA) tells me. And as of this writing, the site does not seem to be functioning. This could be a major blow to the entire industry of stream ripping.

From the outside, YouTube-mp3.org doesn’t look like much.  With just a few banner ads and a place to enter a YouTube web address — the simple design presents a rather modest façade.  But behind the scenes, this stream ripping site — named after its ability to rip audio from streaming music — has been churning out perhaps billions of free songs to its visitors since its inception in 2009.

To download a song for free, all you have to do is find the video on YouTube that has the music you desire.  Then, simply paste its web address into the field provided on YouTube-mp3.org and press convert.  Within a few minutes, or even faster, the audio from the video is ready to be downloaded from the site.

Or at least that’s how it used to work.  Now, a message shows up stating,

“There is some Maintenance going on. Please try again within the next hour.”

It’s possibly the longest hour in recorded history because the same message has appeared since at least October 13th, 2016.

The site’s public trouble started in June of 2012, when Matesanz received a cease and desist letter from YouTube.  Matesanz was given seven days to terminate his YouTube to MP3 converter service, or face the potential of legal action.  At the time, Matesanz compared his site to a cassette recorder. He argued that it was simply providing users a copy of a YouTube broadcast.

When he requested a meeting with the video-hosting behemoth to discuss the letter, Matesanz claimed YouTube answered by blocking his site.

Instead of cowering to their power, the young software developer started an online petition campaign demanding YouTube lift its block.  Over four million signatures later… YouTube-mp3.org eventually regained access to the videos.  YouTube never took legal action.  But BVMI, an association representing the German music industry, did – suing the stream ripper for copyright infringement.  After over a year of conflict, YouTube-mp3.org reportedly agreed to stop its mode of operation after it was revealed that the site wasn’t just acting as a cassette recorder.

In Germany, it is considered legal to make a copy of a song for personal use.  But according to BVMI, YouTube-mp3.org was doing more than just making a single copy.  When a YouTube-mp3.org user entered a YouTube URL, the stream ripper would rip the audio from the video.  But instead of solely giving the file to the user, the site would also archive the file on its server.  That way, when another user wanted the same audio file, they wouldn’t have to wait for it to be converted.  It was a feature that dramatically accelerated the download process.

The site’s creator had survived a confrontation with the German music industry and YouTube… one of the titans of the Internet.

As minor as this programming attribute seems, it made the argument that the site was involved in copyright infringement much stronger.  However, at the end of the German court proceeding, with Matesanz reportedly agreeing to change this mode of operation, the site lived on.  The site’s creator had survived a confrontation with the German music industry and YouTube… one of the titans of the Internet.

For almost three years the story laid dormant, with only a few discerning outlets, including Digital Music News, questioning why no one was talking about stream ripping.  But as quiet as the topic had been among the media, YouTube-mp3.org’s traffic had been raging.  In fact, it was reaching a level that even some of the largest websites in the world could admire.  One estimate claimed the site received 400 million visits per month.

I entered the story around May 2016.  In search of a subject to test out a theory on media attacks, somehow the “relationship” between Google and YouTube-mp3.org landed on my radar.   This stream ripping site in particular stood out to me not only because of its massive traffic, but because it was making money with YouTube’s parent company Google by displaying Google ads on the site.  This was remarkable given that YouTube had originally tried to block the site.  Google had also been publishing an anti-piracy report for years claiming that it did not want to do business with “rogue sites specializing in piracy” and that the search giant was “succeeding in detecting and ejecting these sites from [Google’s ad platform].”

This was also personal to me.

After several months of research, in August 2016 I published a long form story entitled “Stream Ripping: How Google/YouTube Is Slowly Killing the Music Industry,” highlighting YouTube-mp3.org as one of the largest YouTube to MP3 converters in the world and arguing that if stream rippers were allowed to continue accessing YouTube videos – it could mean the end of the business of selling songs.  This was also personal to me.  I’m in the business of creating intellectual property, but more importantly, my daughter is a young budding singer.  So ensuring a creator gets compensated for their creation hits home.

After my story went live, I spoke to several media outlets, resulting in the Wall Street Journal and others publishing reports on the exploding growth of stream ripping.  A representative for Google even assured me that the company would “take action”.  Then on September 26, 2016, the major labels sued the company of one of the main characters in my story, Philip Matesanz, for massive copyright infringement.

Now with the site not functioning, it raises the question — has YouTube-mp3.org been blocked by YouTube?  Neither Google nor the stream ripper responded to requests for comment.  But worth noting, other stream ripping sites have experienced a surge in traffic since YouTube-mp3.org’s site has been under “maintenance”.  It’s a development that will likely leave them vulnerable to future action.

The key here is whether Philip Matesanz responds to the lawsuit.

It will take several months for the record labels to serve the complaint internationally. The RIAA tells me that if Matesanz ignores the court filing, the major labels will likely file for a “default judgment”.  That would mean that if the judge sides with the recording industry on all of the claims in their complaint, a default judgment could block all third-party providers from doing business with YouTube-mp3.org.  Companies like YouTube, webhosting services, and ad networks could be forced to actively terminate business with the stream ripping site — an act that won’t bode well for similar sites.  The key here is whether Philip Matesanz responds to the lawsuit.  If he doesn’t, the site will likely be finished for good.

Patrick Courrielche is a media entrepreneur and co-founder of Inform Ventures — a marketing communications agency specializing in arts-based initiatives. He can be followed on Twitter @courrielche.