Why You Might Want to Buy Some Pandora Stock Right Now 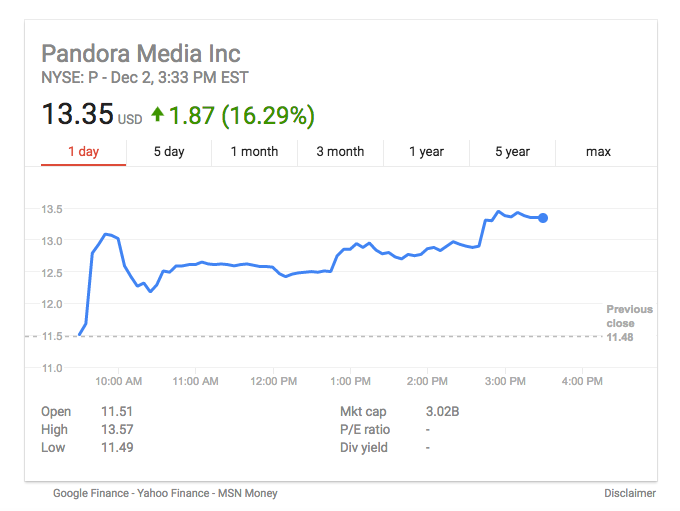 Shares of (P) trading as of Friday afternoon.

Pandora says it’s open to an acquisition by SiriusXM.  Wall Street thinks that’s a great idea.  Here’s everything you need to know.

Please note: this is a fast-developing story.  Please check back as we learn more.  Last updated: 4 pm ET Friday.

Pandora could soon be acquired by satellite radio giant Sirius XM, according to wild rumors flying around.  Well, maybe not so wild: shares of Pandora are flying high on the news, surging more than 16% in recent hours.

The deal would be structured through SiriusXM Holdings owner Liberty Media.

Let’s jump into the rush of information, and who it’s coming from:

1. CNBC has just reported that Pandora is “open to engaging in talks with longtime suitor SiriusXM,” citing unnamed sources.  But, they also said this was the ‘first inning of the process‘.

2. Bloomberg says that Pandora was directly approached on a sale last week by Liberty Media Corp. CEO Greg Maffei.  That suggests a far broader play across Liberty’s radio portfolio.  The offer, according to Bloomberg, was for $15 a share, a target that Wall Street could match in anticipation of a purchase.

3. The Wall Street Journal corroborated that a purchase is under consideration.  But the Journal also pointed to a possible ‘fishing expedition,’ and a price that could shift.

4. Reuters says Pandora is making ‘no effort to sell itself’.  But that sort of sounds like Pandora trying to calm the leak.  So just store that one.

Hard to say what happens next, but a few other points to consider.

The Journal (and other sources) have pointed to a rejected bid back in July.  But, keep in mind that Pandora has had a major management overhaul since that point.  Most important, original co-founder Tim Westergren is back in the CEO chair, after the board bid adieu to Brian McAndrews.

Also important: Pandora has activist investors who want to sell.  That apparently includes Corvex Management, which is a hedge fund headed by Keith Meister.  Corvex owns nearly 10% of Pandora shares, and isn’t convinced that the model is working.  “Despite its many strengths, the company has been unable to date to translate its great product into a great business with an attractive public market valuation,” Corvex issued in a statement.

Other investors have expressed similar frustrations.  But Tim Westergren, notorious for his long-term vision, may be counterbalancing that pressure.

SiriusXM CEO Jim Meyer indicated that the acquisition would help Liberty expand its share of the radio market.  But, there are massive complications with the acquisition, including sharply higher royalty costs for online radio.  Those differences are largely rooted in arcane copyright law, and a  huge point of contention for Westergren.

Pandora has nearly 80 million active users, according to its latest disclosures.  Only a small percentage are paying, premium customers.