I’m Madonna. And This Is the Blatant Sexism, Misogyny, and Constant Bullying That I’ve Faced… 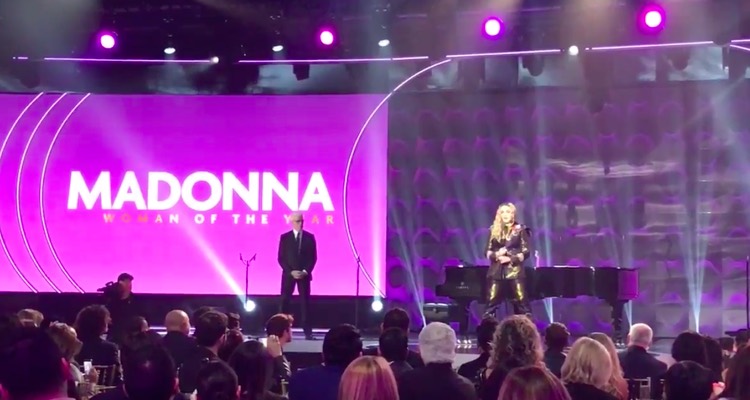 Madonna, an ardent Hillary Clinton backer, has been increasingly vocal on women’s issues since the election.  While accepting Billboard’s Woman of the Year award this weekend, she offered her sharpest criticisms yet against sexism and female self-hatred.  This is her acceptance speech.

[Crowd applause after introduction by Anderson Cooper, who thanked Madonna for giving him faith during his years as a gay teenager.  Madonna accepts, adjusting microphone stand between her legs.]

“I always feel better with something hard between my legs.”

“I stand before you as a doormat. Oh, I mean, as a female entertainer.  Thank you for acknowledging my ability to continue my career for 34 years in the face of blatant sexism and misogyny and constant bullying and relentless abuse.

“It’s mind-blowing to be honored like this after the very public year I’ve had.  I feel stuck, and I feel sad.  And quite frankly, today I feel bloated.

+ I’m Charlotte Church. And This Is How Women Are Routinely Demoralized by the Music Industry…

“I didn’t really feel like standing up and getting an award — I didn’t feel worthy of that.  But I knew I had to drag myself out of my bed, put on my boots and walk up here and say thank you to you guys.

“In the first year I was held at gunpoint, raped on a rooftop with a knife digging into my throat.”

“I started off in a difficult time.  People were dying of AIDS everywhere.  It wasn’t safe to be gay, it wasn’t cool to be associated with the gay community.  It was 1979 and New York was a very scary place.

“In the first year I was held at gunpoint, raped on a rooftop with a knife digging into my throat. And I had my apartment broken into and robbed so many times I just stopped locking the door.  In the years that followed, I lost almost every friend I had to AIDS or drugs or gunshot.

“So I said ‘fuck it. I’m a different kind of feminist.”

“I remember feeling paralyzed. It took me a while to pull myself together and get on with my creative life — to get on with my life. I took comfort in the poetry of Maya Angelou, and the writings of James Baldwin, and in the music of Nina Simone. I remember wishing I had a female peer I could look to for support. Camille Paglia, the famous feminist writer, said I set women back by objectifying myself sexually. So I thought, ‘oh, if you’re a feminist, you don’t have sexuality, you deny it.’ So I said ‘fuck it. I’m a different kind of feminist. I’m a bad feminist.’

“I realized that I could not be a victim any longer. That everything happened for a reason.  And my job was to learn from every shitstorm I wandered into.”

‘As you can imagine, all these unexpected events not only helped me become the daring woman that stands before you.  But it also reminded me that I am vulnerable.  And in life, there is no real safety except for self-belief.  And, an understanding that I am not the owner of my talents.

“I was of course inspired by Debbie Harry and Chrissie Hynde and Aretha Franklin, but my real muse was David Bowie. He embodied male and female spirit and that suited me just fine. He made me think there were no rules. But I was wrong.

“There are no rules — if you’re a boy.  If you’re a girl, you have to play the game.  What is that game?  You are allowed to be pretty and cute and sexy.  But don’t act too smart.  Don’t have an opinion.  Don’t have an opinion that is out of line with the status quo, at least. You are allowed to be objectified by men and dress like a slut, but don’t own your sluttiness. And do not, I repeat, do not, share your own sexual fantasies with the world.

“Be what men want you to be.  But more importantly, be what women feel comfortable with you being around other men.  And finally, do not age.  Because to age is a sin. You will be criticized, you will be vilified, and you will definitely not be played on the radio.”

“When I first became famous, there were nude photos of me in Penthouse and Playboy magazine.  Photos that were taken from art schools that I posed for back in the day to make money.  They weren’t very sexy.”

I said, ‘Wait a minute, isn’t Prince running around with fishnets and high heels and lipstick with his butt hanging out?’

“Eventually I was left alone because I married Sean Penn, and not only would he would bust a cap in your ass, but I was off the market. For a while I was not considered a threat.  Years later, divorced and single — sorry Sean — I made my Erotica album and my Sex book was released.  I remember being the headline of every newspaper and magazine.  Everything I read about myself was damning.  I was called a whore and a witch.  One headline compared me to Satan.  I said, ‘Wait a minute, isn’t Prince running around with fishnets and high heels and lipstick with his butt hanging out?’  Yes, he was. But he was a man.

“This was the first time I truly understood women do not have the same freedom as men.

“People say I’m controversial.  But I think the most controversial thing I have ever done is to stick around.

“Women have been so oppressed for so long they believe what men have to say about them.”

“I’m one of the lucky ones and every day I count my blessings.

“What I would like to say to all women here today is this: Women have been so oppressed for so long they believe what men have to say about them. They believe they have to back a man to get the job done. And there are some very good men worth backing, but not because they’re men — because they’re worthy. As women, we have to start appreciating our own worth and each other’s worth. Seek out strong women to befriend, to align yourself with, to learn from, to collaborate with, to be inspired by, to support, and enlightened by.”

“It’s not so much about receiving this award as it is having this opportunity to stand before you and say thank you.  Not only to the people who have loved and supported me along the way, you have no idea…you have no idea how much your support means.”