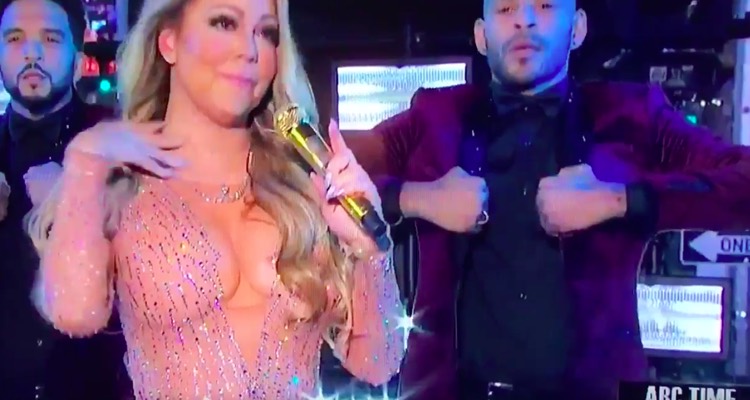 Mariah Carey’s career is on the rocks after disastrous performance on New Year’s Eve.  The lip-synching meltdown is easily the worst of the singer’s career, beating out her 2014 ‘Christmas massacre’…

It was a simple performance of a chart-topping classic for New Year’s Eve.  But somehow, it turned into an all-out train wreck that could threaten Mariah Carey’s career.

The destroyed performance, during ABC’s ‘Dick Clark’s New Year’s Rockin’ Eve with Ryan Seacrest,’ was part of a traditional year-end celebration.  After running through ‘Auld Land Sang’ with no complications, Mariah Carey plunged into an epic lip-synching fail.

The disaster is quickly devolving into a finger-pointing ‘blame game’. Mariah Carey immediately downplayed the incident, tweeting ‘shit happens’ the next morning.  Her rep then slammed ABC and Dick Clark Productions for major technical difficulties, including problems with monitors, mics, and lyrics prompters.  “She was not ‘winging’ this moment and took it very seriously,” Mariah Carey rep Nicole Perna told Billboard. “A shame that production set her up to fail.”

Indeed, Carey may have been doing her best to adapt to multiple miscues.  But separate reports pointed to a crisis created by Mariah Carey.  The entitled diva allegedly appeared hours late to the performance, forcing staffers at Dick Clark Productions to scramble.

Separate sources pointed to endless confusion on Carey’s side, with zero dress rehearsals and a ‘just in time’ jump onto the live stage.

So which version do you believe?

For Carey, the latest development could terminate future performance opportunities.  Back in 2014, the singer famously botched her performance for the Christmas tree lighting ceremony at Rockefeller Center.  The ill-prepared singer was singing off-key and off-time, with a major arrival delay also blamed.

All of that points to a lazy, entitled attitude that keeps producing disastrous performance meltdowns.  And, kills her chances at securing similar slots in the future.

Here’s a cringeworthy isolated track from 2014 that quickly went viral.