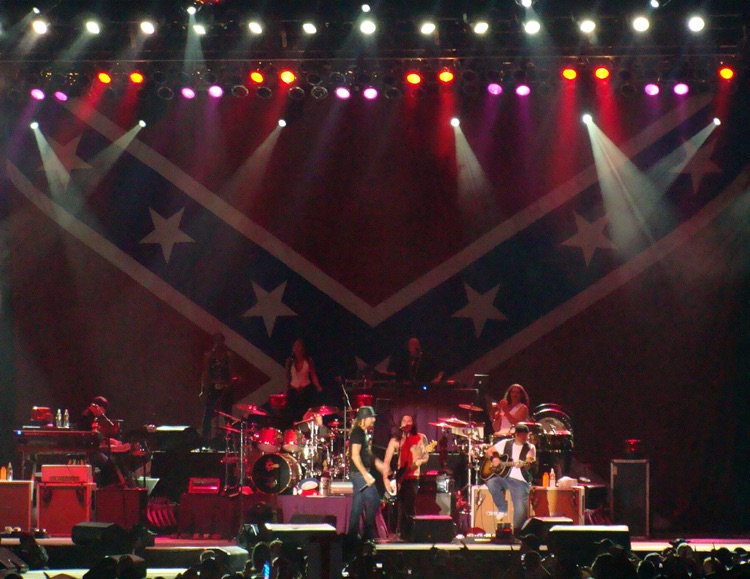 The Confederate flag used to be his signature.  Now, the Detroit Pistons are facing heavy pressure to disavow any connection with Kid Rock, based on accusations of blatant racism.

Kid Rock is all about guns, Coors Light, and Donald Trump.  But is he also a flat-out racist?  That’s a question being weighed by the Detroit Pistons, a team facing heavy pressure to drop their affiliation with the singer.

Kid Rock has been a longtime celebrity spokesperson for the basketball team, and is a frequent fixture at home games.  But Rock is also being accused of racism, with a long-time allegiance to the Confederate flag cited as evidence.

Can the two mix?

The controversy is now boiling over after a recent advertisement for the Detroit Pistons that features Rock.  The ad focuses on the team’s relocation back into Detroit, viewed as a positive move towards urban revitalization.  Since the late 70s, the team has played in a suburban stadium, though the team recently announced plans to return to their long-abandoned city.

Sounds like a positive step.  But the high-profile ad, coupled with Kid Rock’s aggressive stumping for Donald Trump, is putting pressure on the Pistons alliance.  Enter the Michigan National Action Network (NAN), a group applying heavy pressure on the Pistons to dump ‘the racist’.  “If you’re going to have an entertainer, have an entertainer who doesn’t have a history of waving the Confederate Flag,” the group stated.

“Reflect the real Detroit, where 85 percent of the population is black.”

The National Action Network has created serious problems for Kid Rock in the past.  In 2015, the group pressured General Motors to rescind a lucrative tour sponsorship involving Kid Rock because of his overt celebrations of the Confederate flag.  That has included massive stage backdrops of the flag, among other displays.

The tour sponsorship ultimately remained.  But General Motors insisted that only one flag — the American flag — be displayed.

The Confederate flag is often viewed as a symbol of black slavery and discrimination.  Southerners oftentimes defend it as a symbol of their unique culture, though legislatures have been taking measures to mute its presence.  And, the dark history it represents to many Americans.

Meanwhile, Kid Rock’s aggressive, in-your-face celebrations for Donald Trump may be causing additional problems.  The singer recently joined forced with Warner Bros. Records to release a pro-Trump merchandise line, one that blasted Hillary supporters with sexual imagery and profanity.  It was typical ‘go f–k yourself’ braggadocio for fans, and a great moneymaker for Warner Bros.  But, not so welcomed by others.

Add it all up, and a more divided America is putting pressure on figures like Kid Rock.  And that environment is also putting heavy pressure on artists deciding to jump into politics — pro-Trump or otherwise.

The Detroit Pistons have not responded to NAN; stay tuned for more developments.  Image by {just jennifer} (CC by 2.0).