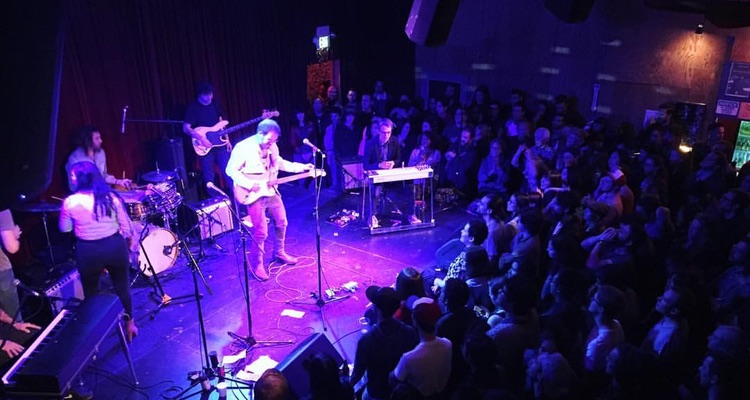 Before the world knew James Taylor and Carole King, they were just local LA artists performing for a couple hundred people at the Troubadour.

Years before Katy Perry played the Super Bowl halftime show she was just another singer/songwriter in the LA scene playing to handfuls of people at the Hotel Cafe with just her acoustic guitar.  Before The Doors took their fire around the world, as a local LA band, they got kicked out of the Whiskey a Go Go after their first performance.  Before Guns and Roses became a staple on the arena circuit, they were hustling the Sunset Strip clubs and the Kibbitz Room at Canter’s Deli playing for whoever showed up.

Last night, Los Angeles witnessed another moment in music history as Theo Katzman and Madison Douglas performed for a sold out crowd of 250 or so at the Bootleg Theater in celebration of Theo’s new release Heartbreak Hits.

The thing is, when you’re living it, you don’t realize it’s meaningful. That it’s a moment being created that the future history books will talk about. This moment, last night, was one of those. And I got to experience it first hand.

Madison Douglas started the evening, alone on stage a cappella. Instantly the room was captivated. For just 19 years old and no official releases, her vocal control, power and nuance is developed well beyond her young age. Her presence was that of a touring veteran, her songs had the honesty and melody of the Laurel Canyon greats, the musicality, passion and chord voicing and changes of 70s soul. Her Facebook Page says “aspiring singer/songwriter.” I’m here to say it outright: Madison, you ain’t aspiring. You are one. A great one at that. 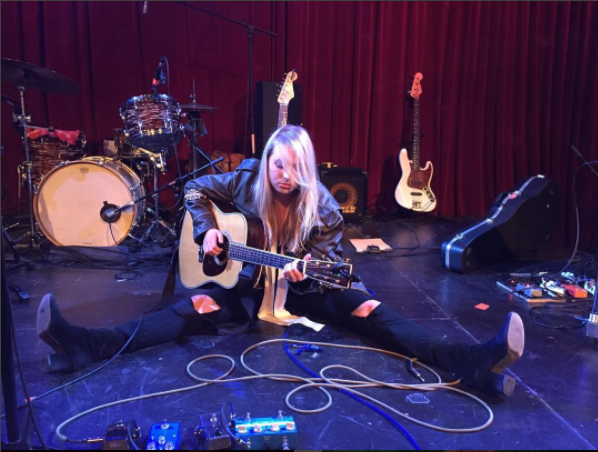 Madison Douglas is a star. The world just doesn’t know it yet. I am very excited to follow her career.

Theo Katzman, who many know from the nu-funk band Vulfpeck, showcased the power of great songs played by a monster band. The show rocked harder than any singer/songwriter show and got more sensitive than any balls-to-the-wall rock concert. Where sweet brilliance and aggressive affection collide.

Whereas Vulfpeck shows are all over the place with very little cohesion or structure with oftentimes poorly mixed sound, Theo’s show was a master class in putting on a great show. They played the record straight down and transitions were smooth. Theo told some stories and jokes which sometimes landed and other times flew off into next week. But the room was with him. All night. Every song. Every note. Every awkward story.

The sound at the Bootleg is always impeccable. Thanks to their FOH engineers who roam the main room with their digital soundboard app on an iPad to make sure everywhere in the house sounds just right. Danny Knowles on the board last night was no exception and had the entire show pristinely dialed in (with just the right amount of sparkle added to Madison’s vox – yeah I know that “sparkle” ain’t on most boards, but Danny figured out how to put it on his!). It of course, helps when the band is made up of all pros.

Theo’s band last night not only had fellow Vulfpeck member, Joe Dart (Bobblehead Dart!), on the bass (the crowd went nuts when he was introduced), but also long-time friend and collaborator, former U of Michigan classmate, former My Dear Disco bandmate and “Game Winner” songwriter, Joey Dosik on the Wurlitzer. The greasiest drummer in LA, Rob Humphreys (Rob HumphGrease!), who played with John Mayer in December and is on the new Brassroots District record, has a pocket and groove like no other. He and Dart locked in tight the entire night. Theo’s backup singers Laura Mace and Mike G were in full force powering in sweet BGVs with solid, present harmonies. Guitarist, Jon Sosin, fresh off tour with 98 Degrees, another LA freelance star, popped up to add tasty licks on a few tunes. A pedal steel player (I missed his name) brought some sweet 50s twang to smooth out Theo’s gritty Strat. Theo Katzman’s right hand is one of the funkiest in town. He laid into Rob and Joe’s pocket while his stratospheric tenor voice powered atop the band and pierced every heart in the room.

Theo Katzman, an equally proficient guitar player, drummer and singer celebrated the evening by celebrating others.

What stood out the most was not how talented he is (unquestionable), not the depth of his songwriting (dagger to the heart), not the power of the band, but his overwhelming joy. He was in it last night. There was no ego in the entire venue. Hell, Theo even passed off his final encore song to Joey Dosik to take lead vox performing “Game Winner” – which turned into a massive sing along (one of Vulfpeck’s biggest hits). Theo and Joey vocally riffed back and forth reminiscing (in tune and on rhythm) about questionable van encounters they once had on tour.

Last night brought together music lovers of Los Angeles. Every single person, regardless of profession, status or age was celebrating life. Celebrating great music. Together. Sure there were “industry people” and (many) musicians in the room, but only the appreciative, music loving ones. No ‘holier-than-thou’ label execs or musicians in the back with folded arms. Everyone was singing or bobbing along. Engaged. Giving and receiving love.

Right at the end, Theo pulled a brilliant business move which may have actually been done by accident. He mentioned that he had no cash for change for his merch but you can “Venmo me. I’m @theokatzman” – Probably a smart move for other artists to have a big sign at their merch table with their Venmo address stating “all tips make us very happy and feed our bellies.” Or something. Who carries cash anymore. Yes of course take credit, but why not accept Venmo too. Easy peasy.

Nights like these don’t come along too often in LA and I am so grateful I got to experience this. Grateful to Theo. Grateful to Madison. Grateful to the Bootleg. And grateful to the Los Angeles music community who got out late on a chilly Thursday evening to celebrate life and music with one another.