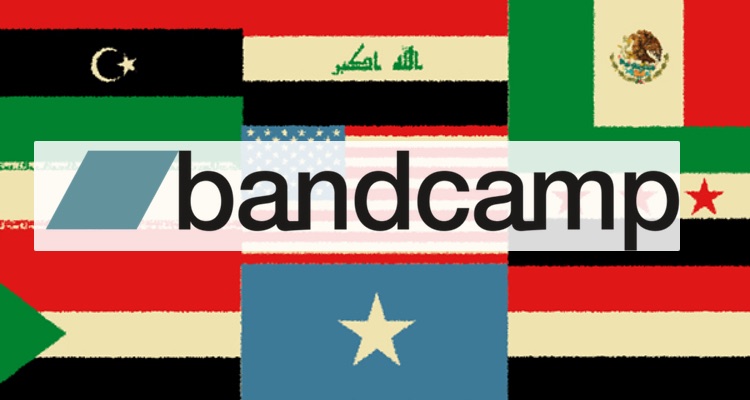 As tours get cancelled, immigrants get detained at airports, and confusion rages on around the country about what the hell is going on after President Trump’s Executive Order banning immigrants from 7 Muslim-majority nations, companies are starting to take public stances.

Starbucks has said it will hire 10,000 refugees in 70 countries (not just America – calm down) over the next five years.  Lyft is donating $1M to the ACLU.  Uber turned off surge pricing during the NYC taxi protest which made it seem like the company was attempting to capitalize on the protest sparking the #DeleteUber movement (Uber clarified that they are very much opposed to the ban and have taken steps to help affected drivers. Worth mentioning that Uber CEO Travis Kalanick is on Trump’s business advisory council).

Diamond states that this Friday, 100% of Bandcamp’s share of the proceeds of any purchase will go directly to the ACLU.

Like 98% of U.S. citizens (including the President), I am the descendant of immigrants—my great-grandparents came to America from Russia and Lithuania as teenagers and worked in sweatshops until they were able to afford to bring the rest of their families over.  Most everyone you speak to in this country has a similar story to tell, because we are, in fact, a nation of immigrants, bound together by a shared belief in justice, equality, and the freedom to pursue a better life.  In this context, last week’s Executive Order barring immigrants and refugees from seven Middle Eastern countries from entering the United States is not simply immoral, it violates the very spirit and foundation of America.

Contrary to the assertions of the current administration, the order will not make us safer (an opinion shared by the State Department and many members of Congress including prominent Republicans).  Christian religious leaders have denounced both the ban, as well as the exception prioritizing Christian immigrants, as inhumane.

It is an unequivocal moral wrong, a cynical attempt to sow division among the American people, and is in direct opposition to the principles of a country where the tenet of religious freedom is written directly into the Constitution.

This is not who we are, and it is not what we believe in.  We at Bandcamp oppose the ban wholeheartedly, and extend our support to those whose lives have been upended.

And so all day this Friday, February 3rd (starting at 12:01am Pacific Time), for any purchase you make on Bandcamp, we will be donating 100% of our share of the proceeds to the American Civil Liberties Union, who are working tirelessly to combat these discriminatory and unconstitutional actions.

As another way of showing solidarity with the immigrants and refugees from the seven banned countries — as well as those impacted by the construction of the Mexican border wall — we’ve compiled a list of albums made by artists from the affected countries (Bandcamp may be incorporated in the United States, but we host artists from every corner of the world).  We believe that knowledge and empathy are crucial weapons against fear and intolerance.  We hope that, as you listen to these albums, you’ll not only discover some great new artists, but will also gain a further appreciation and understanding for the way music transcends all borders, and remember that, even in the darkest of times, there is more that unites us than divides us.

Bandcamp is one of the largest direct-to fan music platforms in the world and fans have paid artists nearly $200 million by using the platform ($5.2 million in the past 30 days).

One thing is certain, standing idly by while our fellow humans’ rights get violated in the name of America is not acceptable to some of the country’s biggest companies, most respected musicians and now, music platforms.

This Muslim ban is everything America is not.

I, along with millions of other Americans, will not stand for this blatant attack on marginalized groups of people. America used to be the place where immigrants could find refuge. Steve Jobs’s father was a Syrian immigrant. Had we banned him, America wouldn’t have Apple.

Immigrants have founded 51% of US billion-dollar startups.  President Trump’s self-serving power grab (the countries on the list, of course, do not include those his family does business with like Egypt, Turkey, Saudi Arabia or United Arab Emirates) may have gotten him elected, but if he wants to prove to the American people (and the world) that he has taken on the honor of President of the United States to actually help the American people and lead the free world, he’s got some serious work to do to turn things around.  His first couple weeks have gotten off to quite the rocky start.