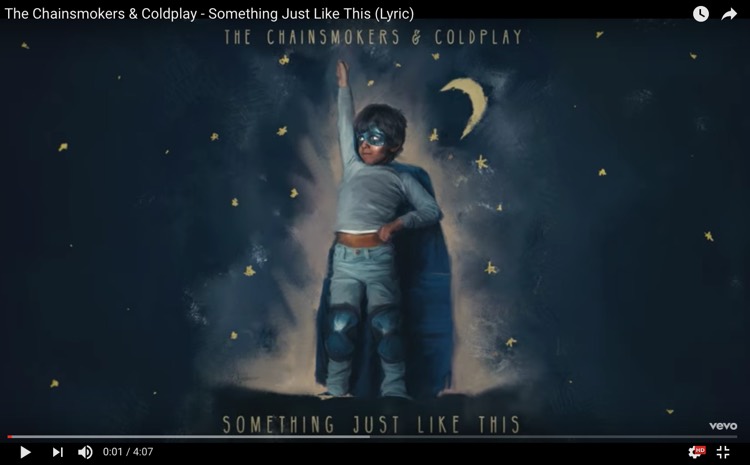 The Chainsmokers just joined forces with Coldplay to create ‘Something Just Like This’.  That was a very, very smart decision.

The Chainsmokers have been on the ascent for years.  Now, they’re aiming to catapult themselves into the pop stratosphere.  Looks like it’s working: earlier this year, the duo teamed up with Coldplay to release ‘Something Just Like This’.  Yesterday, they uploaded the lyric video for that song onto YouTube.

The result was a record-breaking viewing total.  That is, for lyric videos.  According to details just shared with DMN, the track outstripped the previous record held by Justin Bieber’s ‘What Do You Mean?’

Basically, it’s just like it sounds.  A music video featuring lyrics.  Over the years, lyric videos have blossomed into a separate category.  And these days, they usually preface the arrival of a full-blown, ‘official’ video for the song.

Actually, lyric videos started with fans uploading homemade videos before an official video appeared.  Instead of filming something, they just ran the lyrics on the screen, and racked up millions of views.

The only problem with that is that artists were missing out on YouTube revenues on their own songs.  So they started quick-releasing lyric videos of their own.

Fast-forward to the present, and bigger-budget artists have gotten really creative with the format.  Check out how the Chainsmokers and Coldplay expand the concept here.  It probably helped to propel a ton of views (and break the 24-hour record);

After roughly one week, ‘Something Just Like This’ has racked up more than 38 million views.  Not bad for an unofficial vid, though it’s nowhere near the all-time record holder.  That would be PSY, whose ‘Gentleman’ surpassed 100 million views in just 4 days.

In fact, ‘Gentleman’ crashed past 25 million views after one day.

Interestingly, PSY’s famous ‘Gangnam Style’ took 52 days to reach that same mark.  But that video is still the most-viewed YouTube video of all time, with 2.8 billion views.