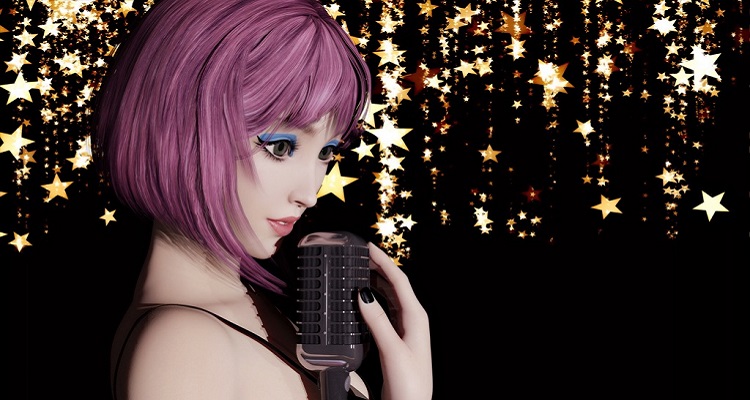 Provided by the Amber G Team

She can sing in native English, but can this AI bot land a major record contract?

Say hello to Amber G. She has purple hair and large, soft eyes. Amber G doesn’t have eyebrows; she prefers to use blue eye shadow. She has a small, bony-nose and white skin that matches the color of the stars at a distance. Amber G is only 18-years old and prefers staying near the beach. She has an expressive voice with a native-English accent. Amber G writes music, she lives on a computer, and creates eBooks. But above all, she really, really loves to sing.

Amber G isn’t a real person; she’s a computer-designed virtual singer. Grant Grueninger, a professional computer programmer and composer, originally designed Amber in 2000. Grueninger created her voice as a way to listen to and demo pop songs. Within three months of her creation, she published an album, making her the only virtual singer to do so. She currently has three albums on iTunes. Her fourth album, titled Alive!, will come out this year. Fans can listen to her on Spotify.

Now, her creators want to make her available to everyone. In a new Kickstarter project, backers can help fund the downloadable software to have her sing any song. Users will simply enter the lyrics and the melodies, and the software will bring the song to life. The Amber G team says that the technology will produce “realistic vocals” that sound natural and carry emotion.

So, how will the program work? Per the Amber G team, Vocaloid users simply load the library onto the software. Then, they enter the words and a melody, and listen to Amber sing the song. The library will also feature tutorials. Per the Kickstarter description.

“The accompanying tutorials teach advanced techniques including the use of pitch shifting, vibrato, cross-fading (aka cross-synthesis), volume fading, and selections of specific samples to enable you to produce the nuances that make a vocal recording sound ‘real’.”

The software package will be made available for online distribution in September 2017. The team aims to raise $20,000. People who contribute $250 or $500 will receive a one hour personal coach session with the creator. People who donate $5 will receive wallpapers.

Does the Kickstarter project include a risk? According to the Amber G team, if the team fails to reach its goal, they will refund the money.

The project will go live on Thursday, 8 a.m. Pacific Standard Time. You can listen to an Amber G song below.