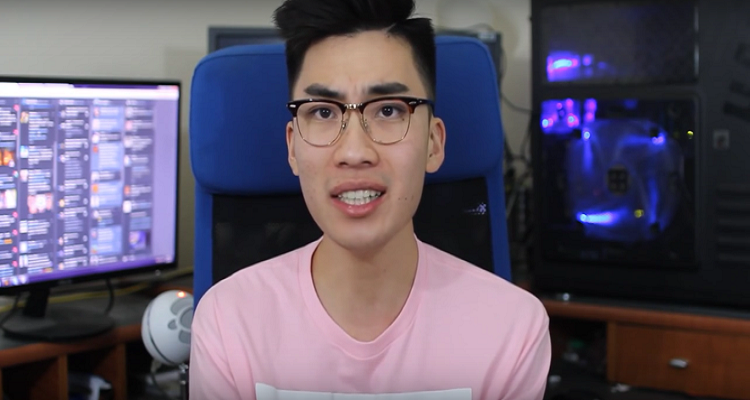 Popular YouTuber ricegum is known for his not-so-nice music tracks directed at other vloggers and music stars.  Specifically, his diss tracks have drawn the ire of Pewdiepie and Blink182’s Travis Barker.  In one track, he attacked Barker’s (then) 10-year-old daughter, Alabama Barker, for not “acting her age.”

This time, he may have gone too far.

Fellow YouTuber Gabbie Hanna, host of The Gabbie Show, posted a Snapchat video challenging ricegum to a freestyle battle.  On Tuesday night, both unexpectedly showed up to a party.  She posted another Snapchat video showing the popular YouTuber exhausted and refusing her challenge. She then made the following joke at his expense:

“All right, so rice doesn’t have his ghostwriter today. It’s fine. I think we can still battle. I think we’re good. No?”

Ricegum, looking away from the camera, simply smiled and laughed off her comment.  Later on, in a dark room, Gabbie posted a video of herself in tears.  She accused the popular Youtuber of hitting her.

“Okay, so update, sorry if it looks like I’m crying. Ricegum didn’t think that joke was very funny and he hit me in the middle of a party and shattered my phone, I can show you that in a sec.  I’m standing out on the balcony so that it doesn’t, like, make a scene.  He literally, like, everybody’s like, “did he hit you?” and I was like, “yeah, he did.”  And my phone is broken, the screen is broken, the back camera is broken, so I need to get a new phone.”

In the past, ricegum has taken direct shots at Hanna.  On his YouTube channel, he posted a diss track insulting her voice, videos, and facial appearance.  He also called her a “joke thief.”  She responded with her own video.

In the Snapchat video following the alleged physical assault, Gabbie showed fans her bruises.  She hasn’t ruled out legal action, but did ask the Asian rapper to pay for her broken cellphone.  Directed at him, she asked him the following question:

“But I make a joke about your scandal and you hit me?”

You can watch the video below.