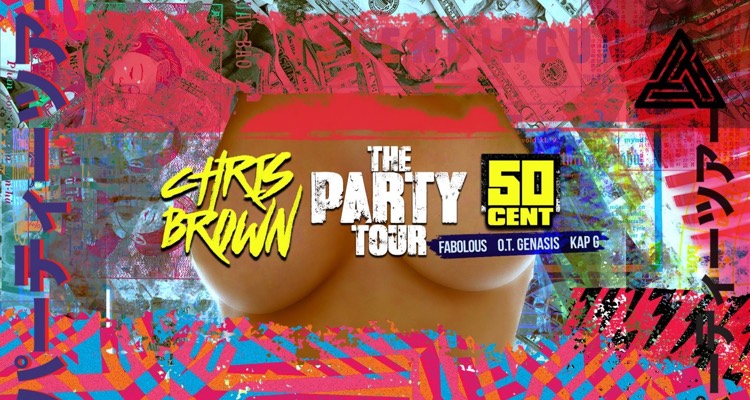 Chris Brown’s ‘Party Tour’ isn’t the well-oiled machine, according to 50 Cent.  And the pay is lousy.

So why did 50 Cent bail out at the last minute, after everything was set?

According to new details from 50 Cent, this simply wasn’t a well-planned operation.  And that includes basic setup on his inclusion contract.  For starters, 50 Cent claims that negotiations had been finalized on his payment prior to the tour starting.  Then, at the last second, touring giant Live Nation slashed that offer by hundreds of thousands of dollars.

But the hardball tactic happened only after 50 Cent’s name was put on touring flyers, billboards, and websites.  Regardless, the pressure tactic didn’t work, and 50 Cent wouldn’t budge.

Right before the tour started, 50 jumped ship.  And someone had to change all those posters (and tickets).  “50 Cent I Never Signed Chris Brown Tour Deal… They Can’t Afford Me!” a TMZ report declared.

50 backpedaled on Instagram.  Specifically, the rapper pointed to a number of unresolved logistical problems.  “I would never say my friends can’t afford me,” he wrote. “This run wasn’t handled correctly.  I’m still on set filming Den of Thieves.”

Meanwhile, the ‘Party Tour’ rolled on, despite the fallout.  But Chris Brown’s volatile, drug-fueled tirades may also explain why 50 Cent bailed out.  That includes an ugly incident in Reno, NV, where Brown declined to perform and forced the club to issue refunds.

In nearby Vegas, the r&b singer managed to recapture his residency at Drai’s after publicly blasting club employees as ‘racists’.  A resulting hiatus cost the singer millions in lost revenues, though the recovery suggests some self-awareness.

Then there are still the endless issues involving violence against women.  The Rihanna assault is years behind the singer, though Brown is still battling accusations involving his latest girlfriend, Karrueche Tran.  Just recently, a federal judge extended a restraining order against Brown, based on repeated threats of physical violence.

Here are the remaining dates of the ‘Party Tour,’ definitely not featuring 50 Cent.