How much should Spotify, Apple Music, Pandora, Tidal, Deezer, Microsoft Groove, Google Play Music and Napster be paying you?  Here’s a handy calculator to help you figure it all out.

In the old days, it was easy to figure out your payments from iTunes downloads, CDs, and vinyl.  Or at least, what you should have been getting paid.  But streaming music is almost impossible to calculate.  And the main reason is that streaming companies refuse to break down their per-stream rates.

As a result, that artist and indie label has banded together to share whatever royalty statements they can.  Many of those have been shared with Digital Music News.

Now, SRC Streaming has compiled tens of thousands of streaming payment data points to construct a royalty calculator.  It’s a best guess estimate based on all of the information leaked by the music community.

Please note that these calculations are estimates.  They are based on the information gathered.  Also, there is always a three-month lag time in royalty accounting, making it difficult to construct realtime estimates.

But why are we forced to cobble together data in this manner? Why the secrecy?

Part of the reason why companies like Spotify and Sony Music Entertainment are so secretive is that per-stream rates are usually pretty low.  Top executives at Spotify are millionaires, and potentially billionaires after their expected Wall Street IPO.  But even the rank-and-file Spotify employee makes over $100,000 a year, making it a tough pill for struggling artists.

But on top of that, it’s actually hard for companies like Spotify to give reliable numbers.  Per-stream rates are constantly shifting, and vary depending on factors like country, ad-supported vs. premium, and total subscribers.

But even worse, a large percentage of the money gets siphoned off by major labels Universal Music Group, Warner Music Group, and Sony Music Entertainment.  Those labels have been accused of underpaying (or never paying) their artists, with secretive contracts like these confirming the industry’s worst fears.

But Spotify and other streaming music platforms have refused to disclose even estimated rate ranges.  All of which makes it (a) difficult to figure out what the payment should be; and (b) contest anything that seems suspicious.  You’re in the dark.

As a result, the artist community has responded by sharing their royalty statements with publications like Digital Music News. 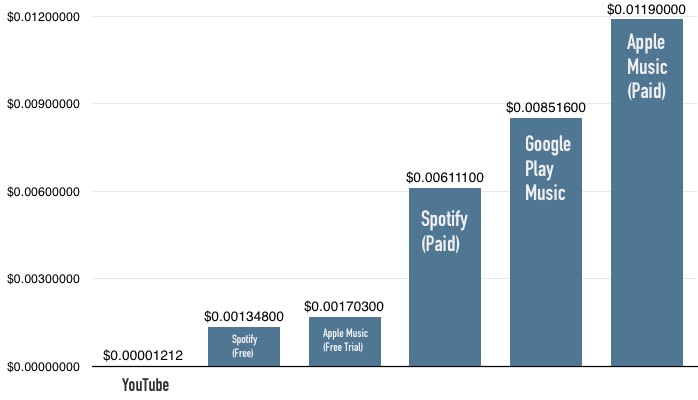 A lot of that data has helped construct the calculations found in this calculator.  But there are other sources as well, including digital distributors, leaks to other sites, attorneys, and other research.

In the case of Pandora, a lot of this is based on statutory rates.  But even that is starting to change thanks to private deals between labels and Pandora (we’ll have a lot more coverage on Pandora and payout organization SoundExchange ahead).

“The royalty rate for each store comes from a range of different sources.  As you know royalty rates can drastically vary due to subscription/country, so to set an average I have used multiple sources for each store.

All data comes from a combination of research and experience.

A Spotify stream can be worth anything between 0.001 to 0.007 per stream on average.  Due to what country you market you’re content too it would be unfair to focus on the very low rates.  Meaning an artist operating from the UK with a majority UK fan base would have a lot higher per streaming rate than say an artist operating from Mexico to a Mexican market. This means a working average is the most fair way. Working out ROI is extremely complex for streaming data!

I would not like to state THE going rate for any of the stores.

Streaming royalty calculator is more to give a brief overview of what you can expect to be earning in your upcoming statements. As stores have this 3 month delay period it can be very important to artist and labels to have a rough overview of their expected income in the coming months.

We will continue monitoring people’s accounts of streaming royalty rates as well as in house sales to create the best estimation that we can for the user. A more complex input from the user is on the cards with the growing amount of data we have. In theory in the future a user could enter how many streams they’ve had, what country it’s from etc, to be able to have a more accurate outcome. But for now the calculator gives a great overview.”