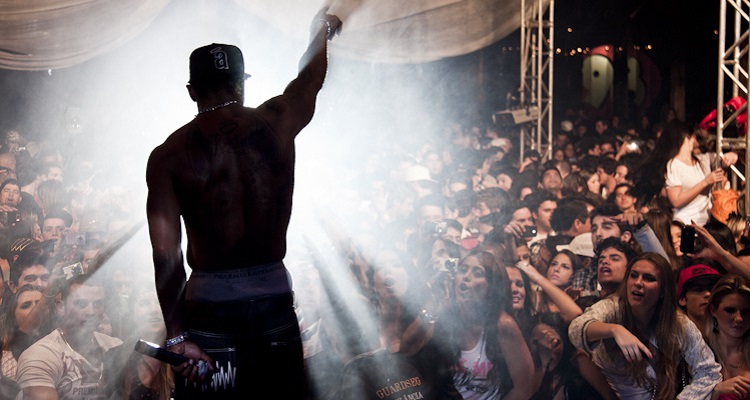 What does a $12,000 ticket to Ja Rule’s Fyre Festival get you? A weekend festival filled with shoddy tents, trash all over the place — and just for free, rabid dogs.

Starting last December, Kendall Jenner, Bella Hadid, and Emily Ratajkowski promised Instagram users a wonderful weekend in the Bahamas in April.  Created by Ja Rule, the Fyre Festival promised fans a two-weekend music festival that celebrated luxury. The tagline on Instagram read, “like all great stories, this one begins with a voyage.”

Yet, people who showed up to the Bahamas found that this scam voyage had sunk under its own weight thanks to poor organization.

Fyre Festival organizers promised to fly guests on custom “VIP-configured” jets to the Exuma section of The Bahamas.  Guests would stay in modern, geodesic domes.  They would swim around private coral reefs, sunbathe, and watch musical acts perform, including Blink 182.

Things got off to a really bad start.  Festival attendees reported delayed flights, lost luggage and a lack of food.  Upon arriving at the event, fans found half-built tents, piles of garbage, and even feral dogs.

So Fyre Fest is a complete disaster.  Mass chaos.  No organization.  No one knows where to go.  There are no villas, just a disaster tent city. pic.twitter.com/1lSWtnk7cA

Early report is that many of the tents aren’t assembled.  Here’s their tropical private island owned by Escobar! #FyreFestival pic.twitter.com/TNzBDbNAUJ

Here’s the “culinary experience” we got for our artists pass at Fyre Festival. pic.twitter.com/Kk9q9uvkX0

@NearFutureEvent @mr_bones_rises These were the top 5 posts on the #fyrefestival subreddit a moment ago. pic.twitter.com/FrsEBfPqOq

@FyreFraud posted one user’s complaint: a festival organizer took them to the beach to “hang out” in the rain as their tents weren’t ready.

Following these reports, and to avoid attaching themselves to the controversy, Blink 182 cancelled their performance.  In a statement on Twitter, the group said,

“Regrettably, and after much careful and difficult consideration, we want to let you know that we won’t be performing at Fyre Fest in the Bahamas this weekend and next weekend.  We’re not confident that we would have what we need to give you the quality of performances we always give fans.”

Now, reports suggest that organizers have all-but-cancelled the event due to poor organization.

Ja Rule, along with organizers, have yet to give an official statement.  The only news given by organization is that the Fyre Festival has been “fully postponed.”

[Update] The Bahamas Ministry of Tourism released an official statement on Twitter a short while ago.

“We are extremely disappointed in the way the events unfolded yesterday with the Fyre Festival.  We offer a heartfelt apology to all who traveled to our country for this event.  Tourism is our number-one industry and it is our aim to deliver world-class experiences and events.

“Hundreds of visitors to Exuma were met with total disorganization and chaos.  The organizers of Fyre recently asked the Ministry of Tourism for support for their private event.  The Ministry of Tourism is not an official sponsor of Fyre Festival.  Given the magnitude of this undertaking, the MOT lent its support as we do with all international events.  We offered advice and assisted with communications with other government agencies.  The event organizers assured us that all measures were taken to ensure a safe and successful event but clearly they did not have the capacity to execute an event of this scale.

“Accordingly, a team of Ministry of Tourism representatives is on the island to assist with the organization of a safe return of all Fyre Festival visitors.   So it is our hope that the Fyre Festival visitors would consider returning to the Islands Of The Bahamas in the future to truly experience all of our beauty.”