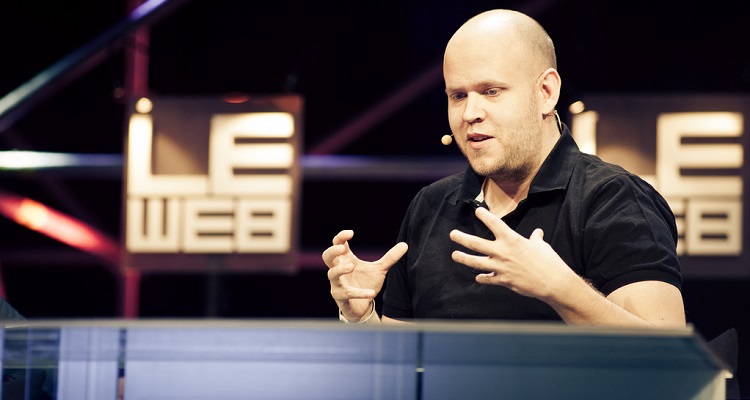 As Spotify’s revenue goes up, artist per-stream and revenue payouts are going way, way down.  And here’s the data to prove it.

Two years ago, in a funding round, investors valued Spotify at $8 billion.  In the latest round, investors pushed that number above $13 billion.  Sounds like some serious growth.  Yet investors can’t ignore one glaring fact: after ten years, the company has yet to turn a profit.

But maybe that’s just another detail.  Now, analysts expect the company to finally go public on Wall Street within a year.  And the deals to make that a reality are finally starting to happen.

Recently, Spotify struck new long-term licensing deals with both Universal Music Group and independent music rep Merlin.  They’re also rumored to be closing a similar deal with Warner Music Group.  Ahead of their long-awaited listing on Wall Street, Spotify seems to have it made.

Yet, why are artists receiving less money as Spotify grows, not more?

Top-line revenues at Spotify are surging ahead, thanks to a flood of new subscribers.  A boost in monthly premium payments and increased advertising means a lot more revenue.  That part is simple.  Yet strangely, Spotify’s per-stream royalties across both recordings and publishing appear to be sinking, according to data shared with DMN.  That includes per-stream payments to labels (including indie labels and self-administered artists), plus mechanical royalty payments to publishers.

In other words, 1,000 streams on Spotify two years ago — when the platform was making less gross revenue — made rights holders more money than 1,000 streams today.

Musicians and labels on the service have felt the crunch.  But why is this happening?  Let’s rewind a bit.

Two years ago, a report published by Audiam found that as Spotify’s revenues went up, artists and label royalties went down.  Audiam is a reproduction rights organization headed by Jeff Price, and recently purchased by Canadian rights group SOCAN.  The company is basing a lot of its data on payouts reported under Section 115 of US Copyright Law.

“However, the impact on the artists, songwriters, labels and music publishers is a bizarre, unexpected anti-intuitive equation that seems to subscribe to Newton’s third law of physics: ‘For every action, there is an equal and opposite reaction.’

“In this case, as more money is made from the music, music creators and copyright holders are making less.”

So, two years later, with Spotify finally reporting growing revenue, have these numbers changed?  Not even close.  To put it bluntly, Spotify has found a way to keep more of the revenue they earn (per stream) in their pockets.

Spotify seems to be countering this accusation by pointing to increased overall royalty payments.  But a closer look at the math shows that Spotify may be paying more — but is also taking a lot more.  All of which means that Spotify (and its shareholders, which include major labels) are cutting costs on per-stream payouts.

Audiam has now issued a new report, and shared it exclusively with Digital Music News.  Again, Audiam is sourcing a lot of its data from publicly available stats.  “The numbers I am providing are not Audiam’s numbers,” remarked Audiam founder Jeff Price.  “They are numbers reported by Spotify as required under Sec 115 of US copyright law.”

Essentially, the latest report updates the streaming service’s per stream numbers ending February, 2017.  And they reached the same conclusion: as Spotify’s value and revenues go up, artists and publishers are making less.

Mechanical royalty rates are continuing to decline in 2017, at least for Spotify’s premium (ie, subscription) streams.

Between December 2016 and January 2017, Spotify cut their ad-supported payouts by nearly half.  The number continues dropping as the year progresses, with premium streams slightly increasing. 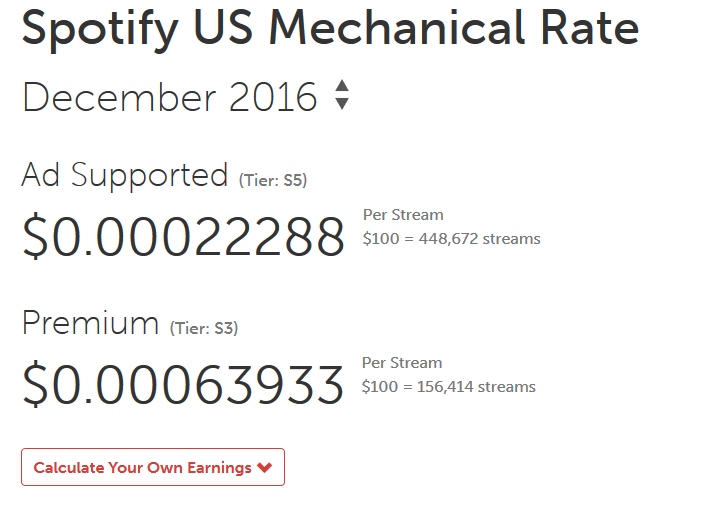 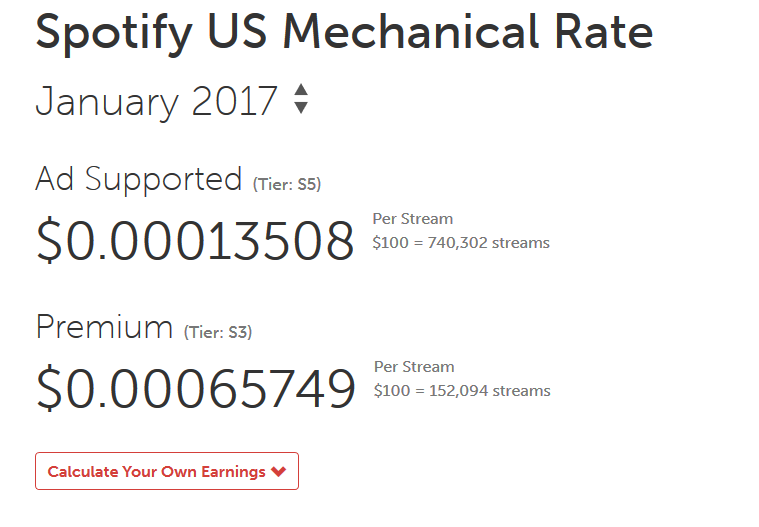 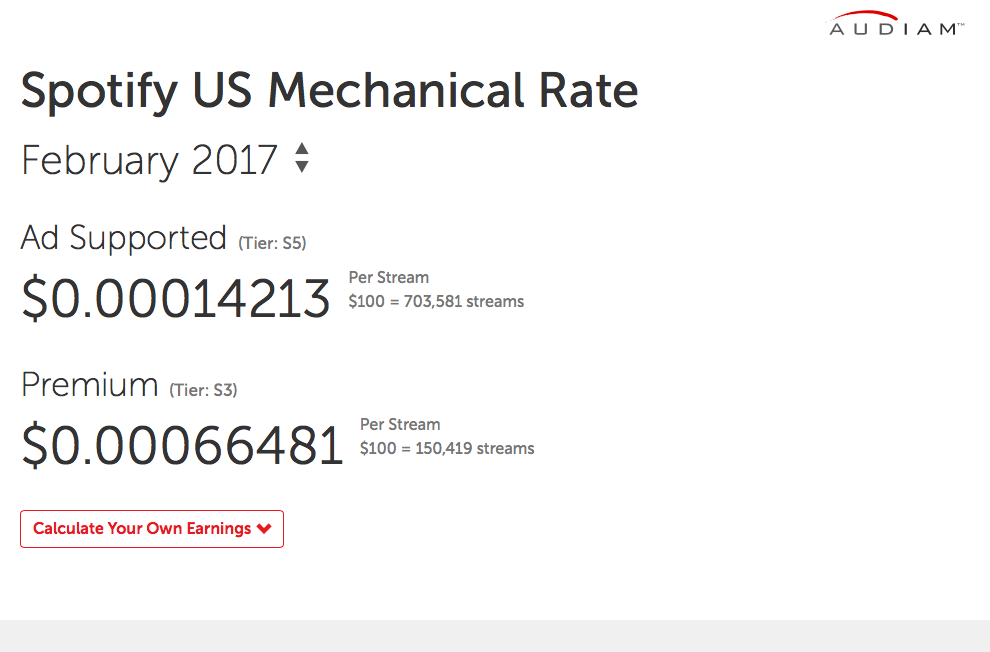 What goes up must come down.  Just not in Spotify’s world.

In a strongly-worded piece in his blog, Bob Lefsetz defended the low payouts.  According to him, Spotify pays out over 69% of its revenues.  So, why the criminally low payouts?  Blame the music labels.  Calling out Audiam’s founder and CEO Jeff Price, Lefsetz explains,

“You’re being screwed by the label. And Spotify can’t say this, because the labels are their partners.”

But Lefsetz seems to be ignoring the reality that most of the recordings on Spotify come from self-distributed artists.  These artists aren’t signed to a label, they are the label.  But also seemingly disregarding Audiam’s previously published numbers, Lefsetz attacked,

“What about Jeff Price, its old fired founder, bullsh—ting that Spotify is not paying on so many tracks? That’s a registry problem, that’s not Spotify seeking to rip-off rights holders, that’s the result of an archaic system wherein we don’t know who wrote what and who owns what.  Does it need to be cleared up?  Yes.”

However, Lefsetz, seemingly Spotify’s apologist, can’t defend the following stats, no matter how hard he tries. Take a look at the numbers:

What can we deduce from the amounts?  The same conclusion that Audiam came to in 2014.  As Spotify’s top line Gross Revenue increases, the per stream mechanical rate continues to drop.

As Spotify continues to prepare for their long-awaited IPO, there’s no clear explanation as to why they continue to pay out artists such little money.  Audiam posted a publicly available website to show historically falling per stream mechanical royalty rates.  And despite Lefsetz’ best attempts to protect Spotify (calling Jeff Price out of touch), his final defense of the company ultimately sounds very hollow.

“But you’ve got an historical deal with a label that pays an incredibly low percentage, you’ve got a very low royalty rate, is this a problem? Absolutely. BUT IT IS NOT SPOTIFY’S FAULT!”