A Week After Its Death, Extratorrent Is Back Online (Updated) 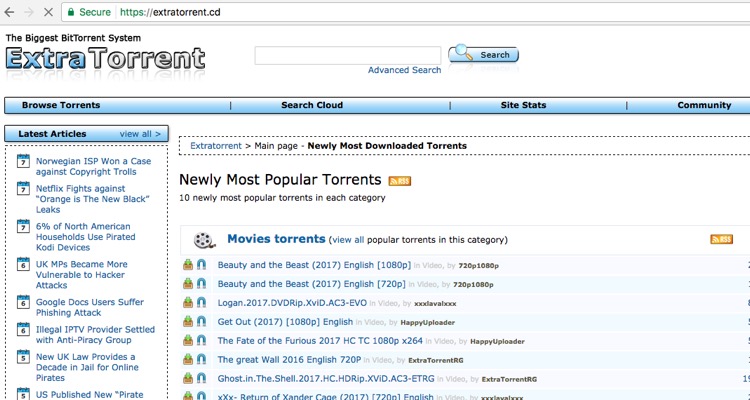 Last week, Extratorrent was completely ripped down and declared dead.  Now, admins have resurrected the entire site, including all of its trackers and historical data.

Updated: After an initial relaunch that looked perfect, aspects of the new site at extratorrent.cd are experiencing problems.  Here’s our ongoing coverage.

Last week, the entire extratorrents.cc site was taken offline.  The owner posted a farewell to users, and went home.  In the process, one of the world’s largest torrent trackers was buried, literally, overnight.

Little did we know, a group of developers were busy saving the entire codebase.  And, plotting a comeback for the tracker.  Guess they didn’t agree with founder SAM’s decision to rip it all down, and decided to take action.

As of early this morning, the entire extratorrents.cc site appears to be back online.

The new site, at extratorrents.cd, looks exactly like the old site with some secondary aspects under construction.  Here’s what admins emailed the Inquirer just a few hours ago:

“We have successfully resurrected it back to its glory at extratorrent.cd with all available data,” the email stated.  “It’s live and new data is continuously being updated.”

At this stage, we’re getting some mixed reviews on performance.  Some sections aren’t linking or functioning after initially appearing great.

Taking a quick look, the new extratorrent.cd site looks stuffed with trackers across film, TV, music, adult, anime, and games, just like the old site.  Other areas like forums and FAQs are missing, though the admin team says this is coming soon.  “Some small features are not working yet.  It’s getting fixed as we speak.”

Actually, there’s already heavy seeding and activity across all categories.  A closer look reveals that this isn’t a clone re-built from scratch, though functionality issues remain.  Lots of older files are back online, with plenty of uploads from last year.

Accordingly, here’s a look at the top music torrents from Monday morning.

All of which looks like a clean transfer from extratorrent.cc to extratorrent.cd.  But most telling is that legacy usernames and credentials are working.  That solidly traces the resurrection effort back to a group tied to the original extratorrents.cc operation.

“Extratorrent.cc has been resurrected back to its former glory,” the email resumes.  “Extratorrent.cd is live with all available data.  We’re also uploading new data.  Some small features are not yet working, though we are fixing them as we speak.  Our group had previously resurrected The PirateBay & KickAssTorrents (as kickass.cd) when these went offline.”

“These sites are our home and we won’t let anyone destroy them.”

Meanwhile, back at extratorrent.cc, the old farewell message remains.  In fact, that site has been dead for a solid week.