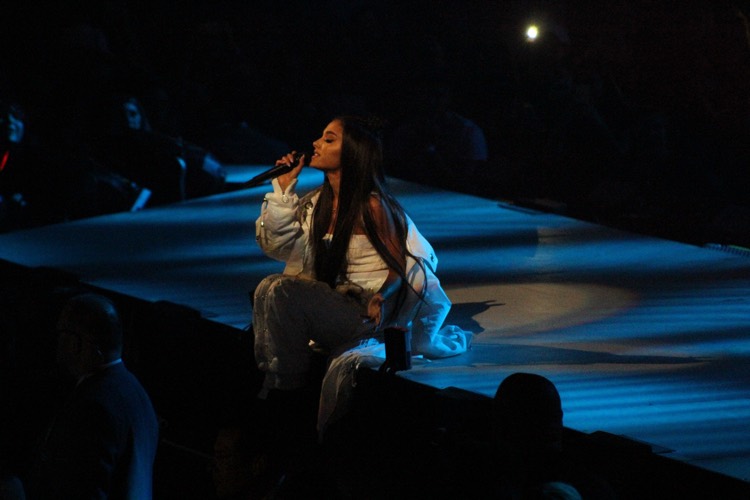 After ISIS claims responsibility for a heinous act Manchester Arena, Ariana Grande has indefinitely postponed the remaining dates of her UK and European tour.

A shaken Ariana Grande has now canceled the remaining dates of her British and European tour, according to details emerging this morning.  The dates may be rescheduled, but for now, they are indefinitely postponed.

An official statement confirming the cancellations could arrive today.  The tour included upcoming dates in London, Belgium, Poland, and Switzerland.

The decision comes as Manchester deals with a horrifying aftermath.  The blast on Monday evening has now claimed lives of 22, including attendees as young as 8.  Others remain missing, while the number of injured reaches 60.

Meanwhile, ISIS has claimed responsibility for the heinous act.  Immediately after the incident, police traced to explosion to a suicide bomber.  Authorities have not released the identity of that bomber, and it’s unclear if there were accomplices.  Separately, coordinated police forces are raiding suspected safe houses while pursuing leads, with raids and at least one arrest already occurring.

Exactly how Grande herself is doing remains unclear.

Grande is undoubtedly accustomed to the pressures of stardom.  But there isn’t a guidebook for this one, and the risk of serious PTSD trauma and other problems hover.

In the panicked hours following the attack, Ariana Grande tweeted a sorrowful message to fans.

“broken. from the bottom of my heart, i am so so sorry. i don’t have words.” 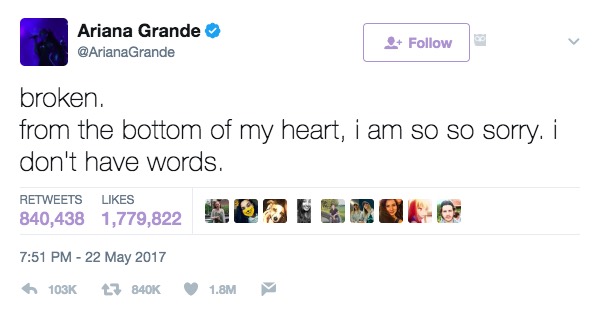 Grande’s ‘Dangerous Woman’ tour included three UK dates, of which Manchester was the first.  Now, an upcoming date at London’s O2 Arena has been nixed.  Other dates in Belgium, Poland, Germany and Switzerland are also not happening.

The next steps are difficult to predict, and largely depend on Grande’s resolve following the attacks.  But if past is prologue, this could be a difficult march back for the 23 year-old singer.  In the aftermath of a brutal terrorist attack in Paris during an Eagles of Death Metal performance, lead singer Jesse Hughes suffered from severe trauma.  Additionally, Hughes outspoken opinions about the incident resulted in numerous cancellations from politically-sensitive promoters.

For Grande, the Manchester attacks are a somewhat different animal.  But unless you’re the person on stage with fans dying at your show, it’s impossible to predict the mental fallout and recovery process.