What Are The Most Popular Drugs at Music Festivals? 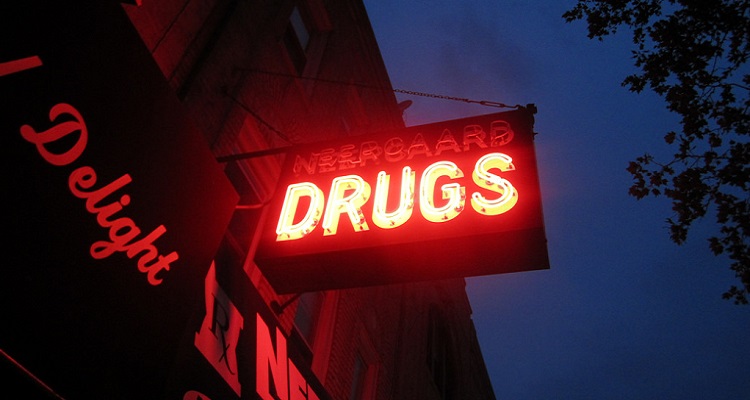 Five people died after consuming illegal narcotics at a music festival in Argentina last year.  In 2015, two people died from drug overdose at Live Nation’s Hard Summer.  That same year, one died at Beyond Overland, another at Electric Daisy Carnival, and another at TomorrowWorld.

Consuming drugs at music festivals is on the rise.  So, to help concertgoers stay safe, Live Nation subsidiary Festival Republic wants to offer voluntary forensic drug testing.  Concertgoers would only have to turn over what they test; they can keep the rest.  Director Melvin Benn explained that the measure would help avoid drug-related deaths at music festivals.

Aiming to roll out drug testing at concerts this year, the controversial measure wasn’t received with open arms.  The UK’s National Police Chiefs Council (NPCC) criticized the measure.  However, the NPCC agreed with Benn that concertgoers will continue consuming drugs.  Now, a new study aims to show what drugs people proudly brag about when at top music festivals.

To see which drugs people talked about, Detox.net tracked Instagram posts from popular music festivals during the past two years.  Searching through 49 hashtags related to music festivals, Detox.net collected posts from March 2015 through February 2017.  They searched for substance-related contents and related terms within user-posted captions.

Examining festivals that had over 100 substance mentions, Detox.net found that more users talked about drugs while at Tomorrowland.  It had a 20.3% share of all festival-related posts.  Miami’s Ultra Music Festival came at second place with 16.5%, and Life in Color in third with 10.3%. 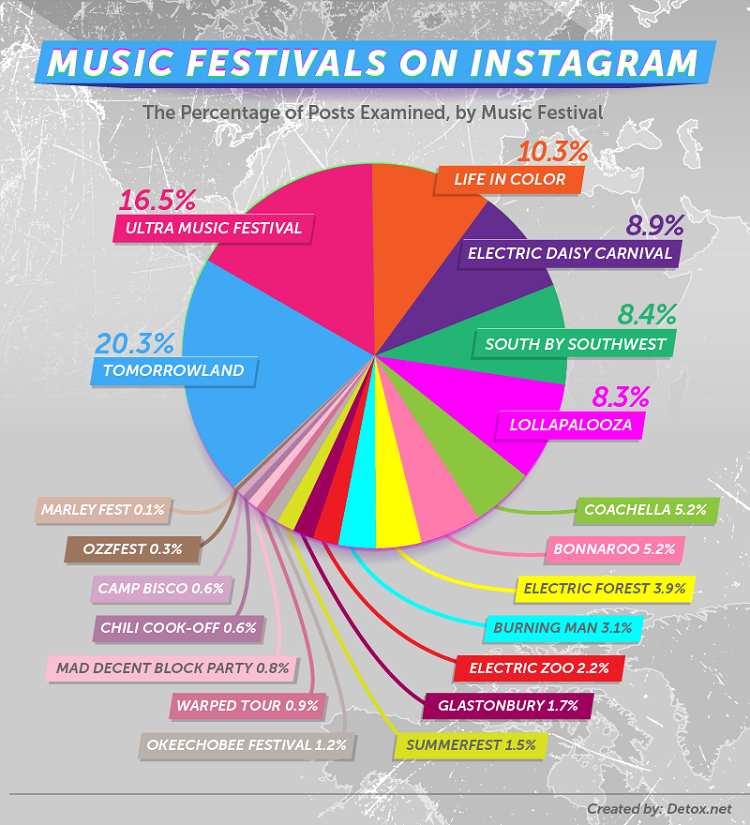 Analyzing concert and festival Instagram posts, Detox.net found that Coachella had the most drug and alcohol mentions.  While Coachella explicitly prohibits drugs at the festival, 7.6% of posts referred to some kind of illegal substance.  Marley Fest came in second with a 5.1% post share.  Burning Man narrowly beat out Electric Daisy Carnival with a 2.5% post share. 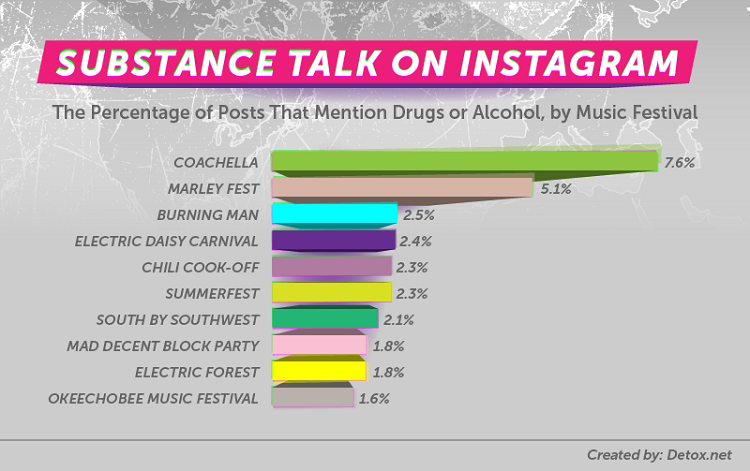 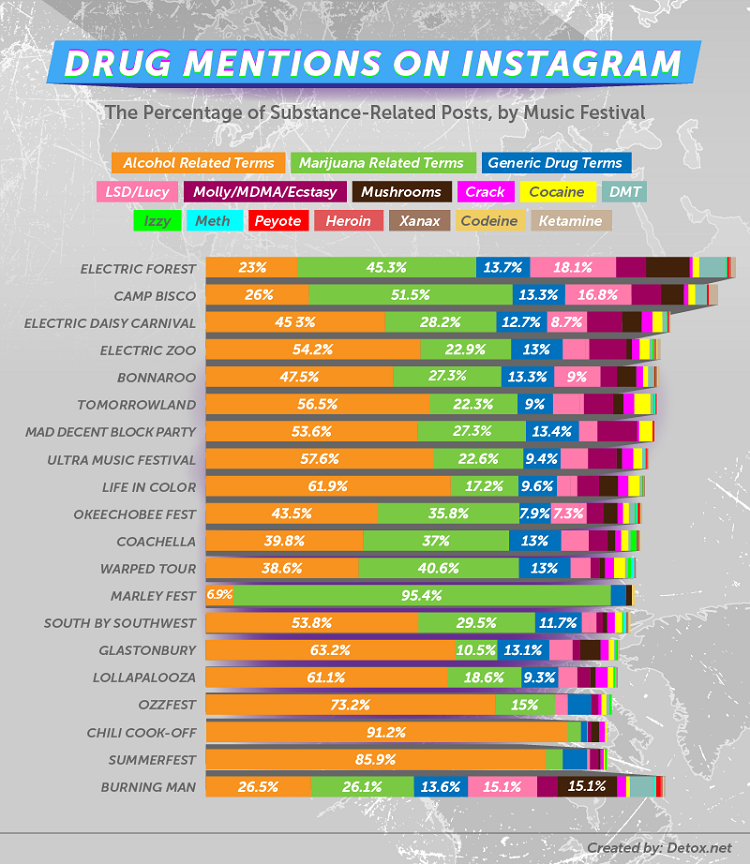 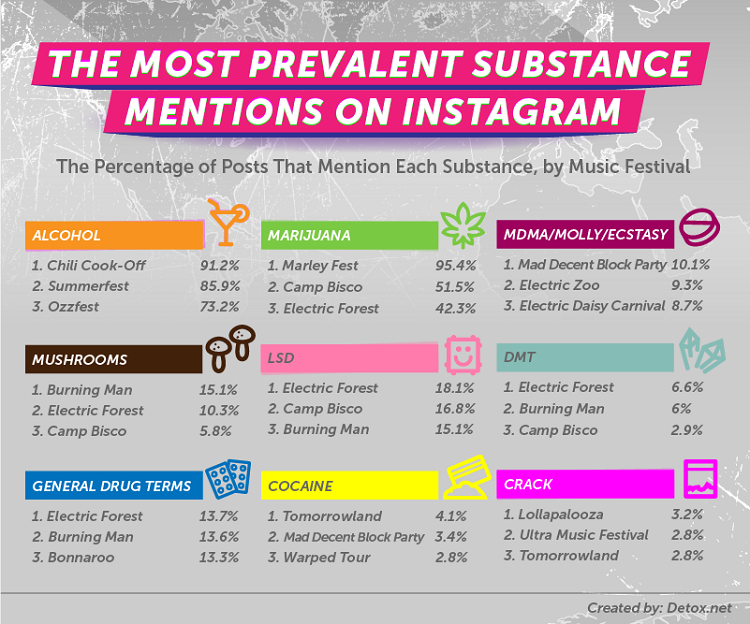 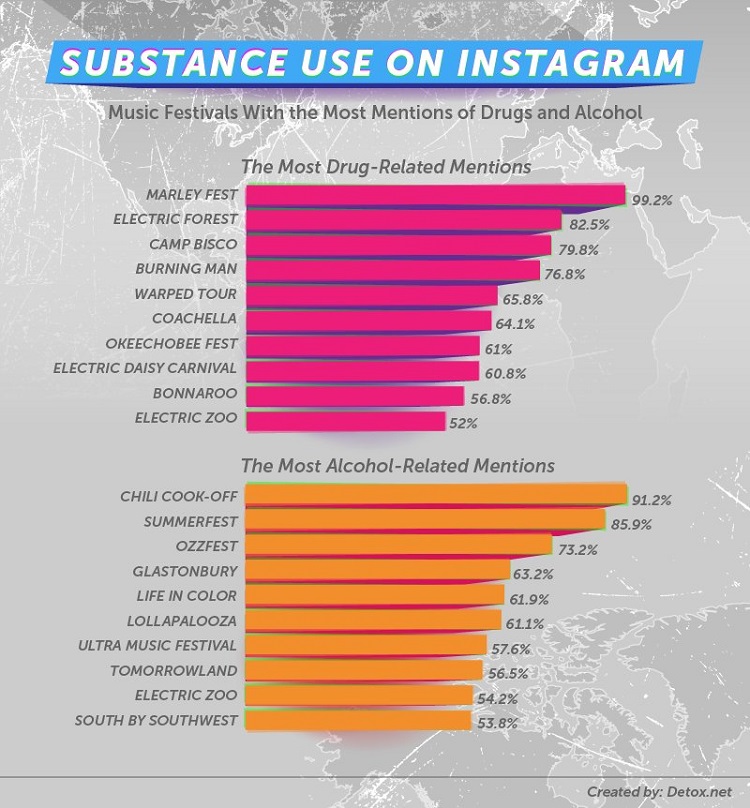 Detox.net reached a similar conclusion mentioned by Festival Republic’s Melvin Benn: people will continue consuming illegal and harmful drugs while at popular music festivals.  However, steps can be taken to ensure one’s personal safety (as well as survivability) while attending these concerts.  Detox.net explained,

“There are several resources available to stay sober during festivals. Harmonium is an organization that was established in 2002 at Bonnaroo. This group volunteers at most music festivals, including Lollapalooza, EDC, the Governors Ball, and Bonnaroo. Harmonium helps festivalgoers, either in recovery or just anyone trying to remain sober – by providing them a safe space to enjoy the festival without the presence of any substances.”

You can check out the complete study here.