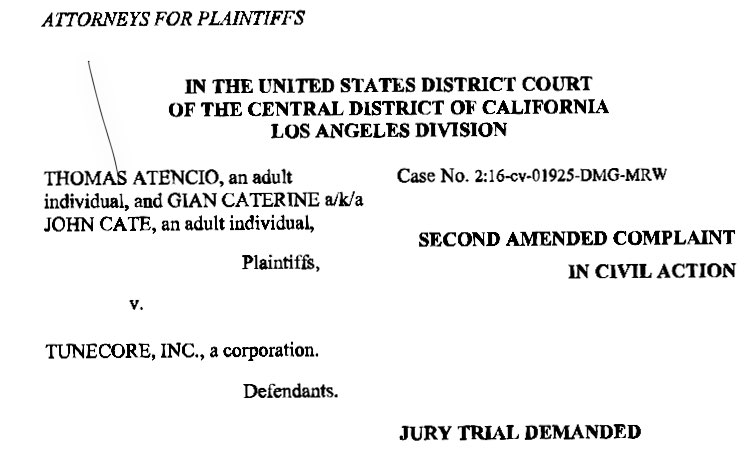 Did Tunecore stiff two of its original members?  The answer to that question could cost the company millions.

It was a revolutionary idea back in the day.  Any artist, anywhere, could upload their music to any digital platform.   Pay a fee, and you could play.  And, potentially reach millions of fans (and more importantly, sell to them).

Tunecore was one of a few pioneering companies to make that vision a reality.  But not everyone is celebrating.  According to a lawsuit now filed in US District Court in Los Angeles, Tunecore refused to pay out options after a mega-acquisition to Believe Digital.

How much are we talking here?  According to the paperwork, Tunecore stiffed the pair of approximately $365,000.  That’s about 1% of the purse on Tunecore’s $35 million acquisition.  But here’s where that figure gets crazy: according to legal sources watching this case, Tunecore could be on the hook for punitive damages as high as $8 million.

That’s nearly 23% of the acquisition price, and enough to seriously deter future companies from reneging on stock option payouts.  That is, if they’re found guilty.

Also central to this story is Jeff Price, who recruited both Atencio and Caterine to help deliver his vision.

In the filing, both are lauded for their deep expertise, contacts and knowledge.  In fact, it’s questionable whether Tunecore would have achieved the same level of success without this trio working their magic.

Like many startups, stock options make up for lower salaries.  “As in any start up venture, cash and cash flow are at a premium,” the filing continues.  “Resultantly, association with top talent like Plaintiffs is usually obtained through a combination of cash and stock and/or stock options.”

“Here, that is precisely what was promised would occur given a lack of cash and resources in the fledgling company.”

Only problem?  No payoff as promised, according the founding duo.  So now, the plaintiffs are accusing Tunecore investor Gil Cogan of knowingly defrauding the pair of their rightful earnings.  “Given the evidence known to date, it is believed that Cogan may have never intended to honor the options agreements,” the complaint reads.

“He was intentionally misleading Atencio and Caterine.”

Fool me once, shame on you?  “Defendants want to both have their cake and to eat it to – remaining associated publicly and in name with Plaintiffs and so that the public and artists do not know the truth about them – while simultaneously privately defrauding Plaintiffs.”

“To date, Plaintiffs have been defrauded of their compensation.”

And what about Jeff Price?  “Yes, I was paid for my founder’s share,” Price emailed us.  But that doesn’t mean he’s not a problem for Tunecore’s current brass.

Here’s a copy of the filing.