Why Everyone Is Stealing the Crap Out of Jay Z’s 4:44 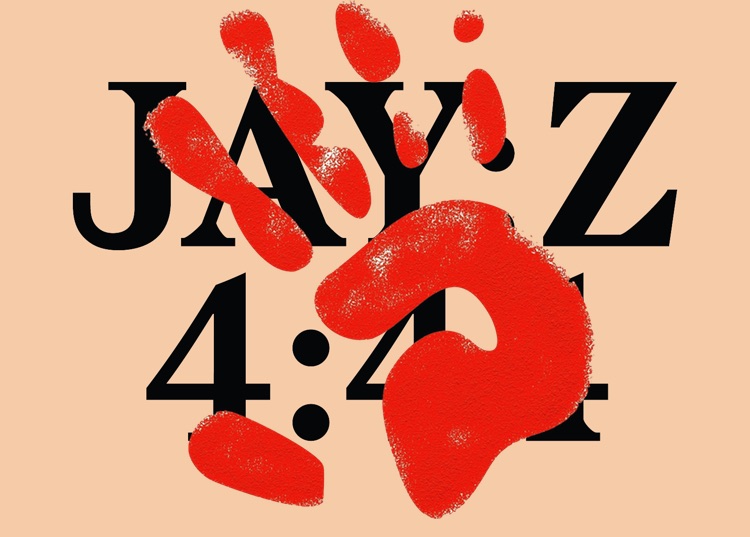 Somewhere in Jay-Z’s alternative universe, a Sprint/TIDAL-exclusive is a fantastic idea.

The music industry got the memo on streaming exclusives in 2016!  And this memo has been delivered — and re-delivered — by the industry’s biggest players.  Like Lucian Grainge, Jimmy Iovine, Kanye West, and Troy Carter, just to name a few.  The verdict is in:

They piss off fans, and punish paying subscribers who are supporting the music industry.  They cause huge spikes in piracy (which means the money goes OUT of the industry’s pocket).

But this isn’t one asshole at Digital Music News saying it anymore.  It’s the entire industry!  So why has Jay-Z spent tens of millions promoting the most restrictive album exclusive of the year?

I haven’t heard 4:44, Jay-Z’s newest album.  And you probably haven’t either, unless you pirated it.

And the reason is so obvious, it’s strange that someone with Jay-Z’s business acumen wouldn’t also realize it.  Chances are, you aren’t a Tidal subscriber.  But there’s even a slimmer chance that you’re a Tidal AND a Sprint subscriber, which is actually required for anyone jumping on board after June 26th (the album was released on June 30th).

You probably don’t believe this album is that restrictive.  Well, take a look. 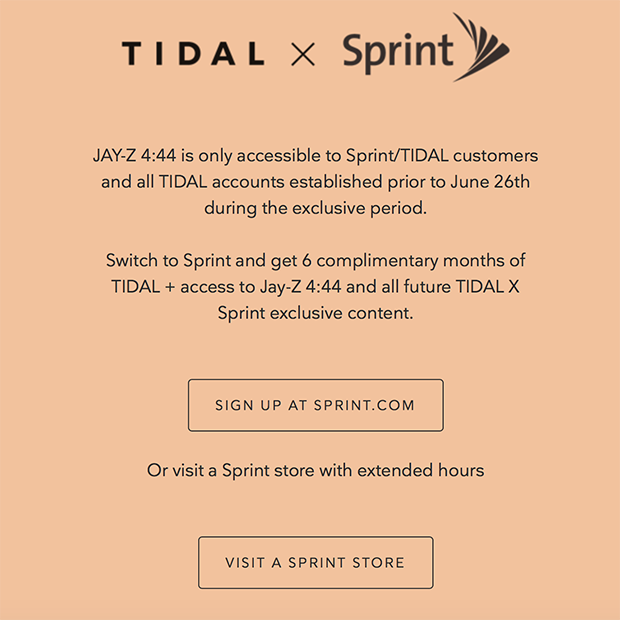 So… people are going to switch mobile providers and ditch their Spotify accounts to hear this album?

Of course they’re not.  Even if they’re absolutely die-hard Jay-Z fans (which there are a lot fewer of these days).

Sure, maybe Jay-Z was contractually bound to release a Sprint exclusive as part of their deal.  But that doesn’t make it a good idea!  So a contractual clause just made Jay-Z’s album irrelevant.

And let’s look at how many people can legitimately access this album right now.

First, let’s start with Tidal: how many subscribers does Tidal really have?  At this stage, I’m not sure we can confidently state that Tidal has more than one million paying subscribers worldwide.  Frankly, after all the allegations of complete subscriber fabrication, Tidal’s paying base might be in the low-100,000s (if that).

Now, overlay that with Sprint subscribers who are aware of this offer, and that number gets even smaller.

But Sprint has the exclusive, so they’re blasting it to their subscribers!

No, they’re not.  My girlfriend is a Sprint subscriber (and a Spotify subscriber).  She’s a music fan and constantly on her iPhone.  And she had NO idea there was a new Jay-Z album out.

But what about the bus wraps and huge signs in Times Square?

Dude, that’s 1990s marketing.  I’m not perplexed at what ‘4:44’ means after seeing it mysteriously wrapped around an LA city bus.  Maybe it’s a new X-Men movie, or a huge Netflix series.  Maybe it’s a music thing.  I’m mildly curious, but ultimately, who cares!  There’s so much that I already can’t keep up with, I can wait!

And I’ve already decided which streaming music service I’m using.  Seriously, I’m not switching to Tidal (and Sprint) for one album (or even a few albums).  There are already too many people crawling all over my credit card!

Jay-Z bought a turd and didn’t put the time in to fix it.  Sprint then bought a piece of that turd and now we’re supposed to care?

Please.  The only people that genuinely need to hear 4:44 during its release week are die-hard Jay-Z fans.  Or, just die-hard rap fans.  And guess what?  They’re going to steal it.

Like, Snoop Dogg, who flat out admitted to pirating 4:44.  Because he’s just as confused as you are about why this album is available to… nobody.

“I want to shoot a shoutout to JAY-Z, just dropped another motherfucking hot album, 4:44,” Snoop relayed. “But you know what, I don’t got TIDAL, so a nigga had to bootleg it to me. I’m on iTunes and shit, I don’t understand this. Y’all got to explain that to me. I went to iTunes looking for his album and I couldn’t find it but my homie had to send it to me. But shoutout to JAY-Z, my nigga. He did it again.”