Arcade Fire Get Revenge on Kendall and Kylie Jenner 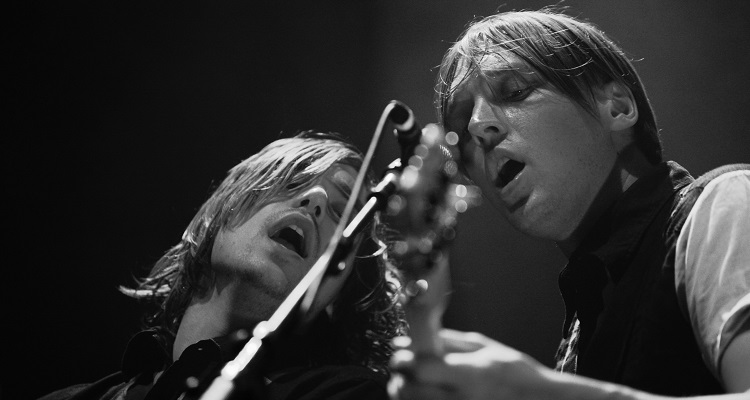 When it comes to Kendall and Kylie Jenner, Arcade Fire believes revenge is a dish best served superimposed.

Last week, Kendall and Kylie Jenner made the lamentable decision to superimpose their faces over iconic names.  Selling for $125 each, the Jenners sold “vintage” T-shirts with shots of The Doors, Tupac Shakur, and Biggie Smalls.  The icons in black-and-white in the background, the Jenners on top in color.

After two lawsuit threats and significant backlash, the Jenners pulled the shirts and issued a public apology.  Now, Arcade Fire has decided to dish out some sweet revenge against the sisters.

So @arcadefire are selling their own versions of *those* Kylie and Kendall Jenner t-shirts pic.twitter.com/vTrKrDJPxp

Kylie and Kendall Jenner had originally sold the t-shirts as part of their “Rap vs. Rock” campaign.  All proceeds would go straight to them (with none going to the iconic artists represented on the shirts).

“I am not sure who told @kyliejenner and @kendalljenner that they had the right to do this.  The disrespect of these girls to not even reach out to me or anyone connected to the estate baffles me.  I have no idea why they feel they can exploit the deaths of 2pac and my son Christopher to sell a t-shirt.  This is disrespectful , disgusting, and exploitation at its worst!!!”

The estate of the late rapper sent Kylie and Kendall Jenner a strongly-worded cease-and-desist letter.  But that was just the beginning.

The Doors’ manager, Jeff Jampol, slammed the girls over the “Rap vs. Rock” line.  He viewed the Jenners as sisters who “don’t actually do anything.”  According to him, the move was “ironic, at least, and criminal, at worst, both morally, ethically and artistically.”

The heavy criticism led the Jenners to issue the following apology.

“These designs were not well thought out and we deeply apologize to anyone that has been upset and/or offended, especially to the families of the artists.  We are huge fans of their music and it was not our intention to disrespect these cultural icons in anyway.  The tee shirts have been pulled from retail and all images have been removed.  We will use this as an opportunity to learn from these mistakes and again, we are very sorry.”

Not everyone has bought the apology, however.  The estate of Notorious B.I.G. threatened to pursue a lawsuit.  Jeff Jampol also threatened to sue, while demanding a detailed report of the t-shirts’ sales.

Arcade Fire has yet to issue a statement regarding the sale of their new T-shirts.