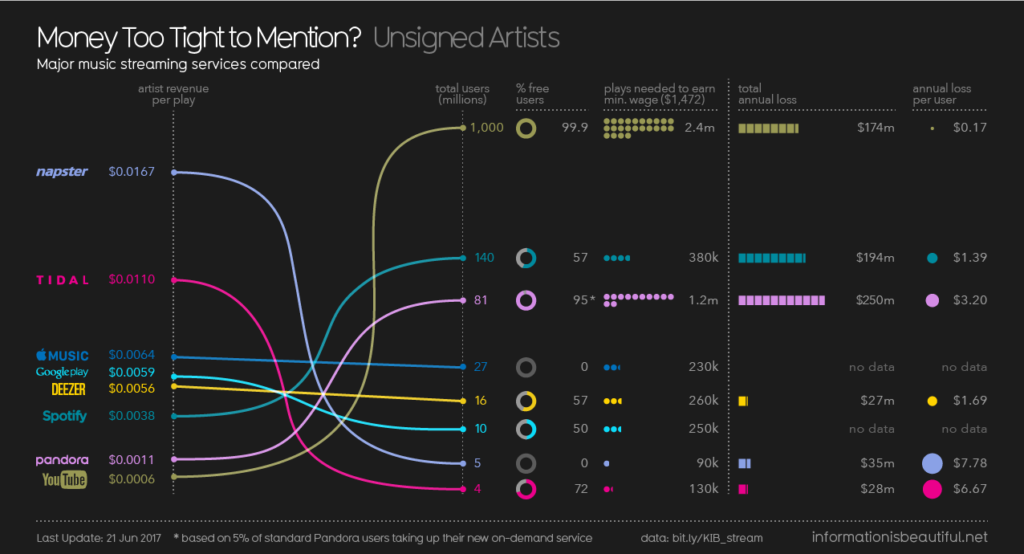 So, how much can you expect to get from Spotify, Apple Music, and other streaming platforms?

Music streaming services have helped to spark a revival in the music industry.  This year alone, major labels have reported record-breaking revenue.

But how much are artists actually earning?

We’ve been compiling data on this for a few years.  But getting a comprehensive, overarching look is pretty difficult.  Now, Information is Beautiful has released a new infograph showing how much major streaming services actually pay.  It reflects their best efforts to amass per-stream data into one diagram.

Two years ago, the team at Information is Beautiful did the same analysis.  They analyzed what it would take for an artist to receive a monthly wage minimum of $1,260. For example, Google Play Music paid out $0.0073 per play; so artists would need 172,206 plays to earn the $1,260.

TIDAL, which paid out $0.007 per play, would require a similar amount.

Artists on YouTube have traditionally received lowest amount.  In 2015, the video platform paid $0.0003 per play.  To earn the minimum wage amount, musicians would need 4.2 million plays on the platform.

Now, Information is Beautiful has updated their list for 2017.

It’s worth noting that this report doesn’t apply to major artists, as they receive an unreported cut based on their contracts.

And the king of streaming payouts is… Napster?

Napster topped this year’s list with the highest artist revenue paid out per play.  For a single stream, Napster paid out $0.0167 to unsigned artists.  Signed artists received $0.0190.

Compared to its competitors, however, the platform has the second-lowest amount of total users: 5 million.  So it can be difficult to scale that per-play number, but great if you assemble a core Napster following.

But why does Napster have higher payouts?  The answer may be that the service doesn’t have a free tier.  In 2015, a Napster spokesperson told TechRadar that a freemium business model simply “isn’t sustainable.”

The company has reported losses, however.  Yet, its losses only amounted to $35 million, the third-lowest on the list.  With five million users on its platform, on average, each user costs Napster $7.78.

Despite Jay Z’s massive star power, users have yet to flock to the high-fidelity streaming service.  The company last reported around 4 million users, though it may have inflated its total subscription numbers. The Jay Z-owned streamer pays out $0.0110 per stream for unsigned artists.  An artist on the platform would need 130,000 plays to earn the monthly minimum wage amount.

Based on Information is Beautiful’s calculations, only 28% of users on the platform pay for a subscription.  TIDAL last reported an annual loss of $28 million, the second lowest on the list.  Each user costs the company about $6.67.

In just two years, over 27 million people have subscribed to Apple Music.  It took Spotify nearly a decade to reach 50 million.  While Apple remains secretive about its losses, unsigned artists on the platform can expect to receive $0.0064 per play.  For an unsigned artist to earn $1,472, they’d need 230,000 plays.   Signed artists receive $0.0073 per stream.  They would only need 200,000 plays to earn the monthly minimum wage amount.

Apple didn’t share how much each user costs the company.

Like Apple, Google won’t report on its annual music losses.  That includes how much each user costs the company.  Currently, the service has more than 5 million paid subscribers, and 5 million more on a free tier service (possibly on a trial subscription).

French-based music streaming service Deezer may not have a huge presence in the United States just yet.  However, it is available in over 180 countries.  It also has more than 40 million licensed tracks.

Deezer also has the lowest annual loss on the list.  Each user costs Deezer just $1.69.

Ahead of their long-awaited IPO, Spotify is currently embroiled in controversy. While the service has the highest number of paid subscriptions, artists often complain about low payouts.  According to Information is Beautiful, the Swedish streamer pays out $0.0038 per stream to unsigned artists.  That means for an artist to earn minimum wage, they would need 380,000 plays on the platform.  Signed artists need 340,000 plays at a per-stream rate of $0.0044.

The streaming platform has recently locked down long-term licensing deals with major labels.  It also has 140 million total users.  According to Information is Beautiful, 57% use its free-tier service.  The number doesn’t add up, as Spotify last reported over 50 million users.  Roughly 90 or so million use the service.

Losses at the company continue growing, however.  Information is Beautiful calculates an annual loss of $194 million, with each user costing the company $1.39.

Without presenting a clear financial plan, Pandora’s CEO promised investors that the company would turn a profit this year.

On the infograph, Pandora landed in second-to-last place with one of the worst artist payouts.  Per stream, Pandora pays $0.0011.  It also has the second-highest amount of total users, right behind Spotify.  However, an unsigned artist would need 1.2 million plays to earn minimum wage on the platform.  Signed artists would need 1.1 million plays at a per-stream rate of $0.0013.

Don’t expect to earn money once again on: YouTube

Artists, major labels, and music organizations have long called out YouTube for its paltry royalty payments.  The Google-owned company has defended itself, stating that it has paid out over $1 billion.  The numbers speak for themselves, however.

Two years ago, YouTube paid unsigned artists $0.0018 per play on its video platform.  That number has dropped to $0.0006, the lowest on the list.  Don’t expect signed artists to catch a break.  They receive only $0.0007 per stream.

The platform has one billion users.  The team at Information is Beautiful calculates that only .1% have subscribed to YouTube Red.

For an artist to earn minimum wage on the platform, they would need 2.4 million plays.  While this number remains high, two years ago, unsigned artists would earn $1,260 only after just 70,000 plays.  Signed artists receive $1,472 after 2.1 million plays.

The Google-owned video platform reported a loss of $174 million.  With over 1 billion users, each costs YouTube just 17 cents.

Featured image by Information is Beautiful