Exclusive: Landr Is About to Launch a Digital Distribution Service 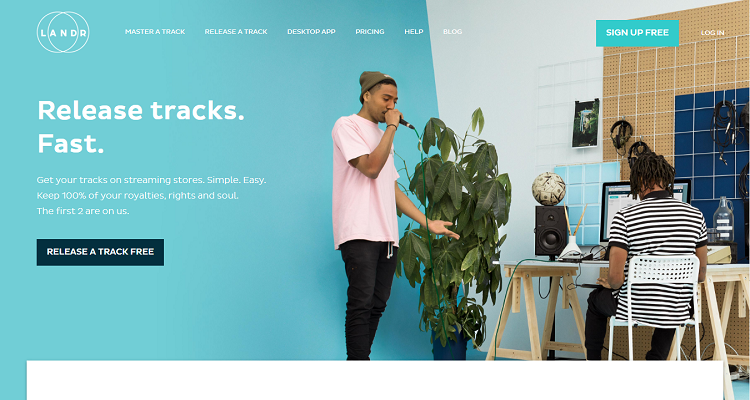 Update: Shortly after we published this piece, Landr soft-launched its digital distribution service. It isn’t being publicized, though it’s now out in the wild. Here’s our original report from this morning.

Want to sound like a pro at a fraction of the cost of studio mastering?  Since 2014, Landr has offered cloud-based mastering for musicians across the industry.  Now, to compete with CD Baby, Tunecore, and ReverbNation, Landr will soon launch its own digital music distribution service.

So far, Landr has largely focused on cloud-based, automated digital track mastering.  After uploading your tracks and paying a per-track fee, the company applies a custom set of tools and parameters to each song.  The company claims not to work with any presets at all.  Instead, it provides intelligent mastering for just about any track.

But maybe that’s not enough to pay the bills. Or, it was always just one piece in a much bigger, more comprehensive service.

A source who spoke exclusively with Digital Music News says that Landr will launch its very own digital distribution service.  We later corroborated that information — and yeah, this is definitely in motion.

Now here’s where this gets a tad sticky.  Currently, the company has a collaborative partnership with CD Baby.  Which is, of course, a top digital music distributor.  Users who head to CD Baby’s page on Landr will find the following invitation.

Master your tracks instantly. Hear a preview in seconds. Only $9.99 per song.”

Users can then click on the page to head to CD Baby’s mastering site.

CD Baby offered an article on their website about Landr Audio Mastering.  However, the page now redirects to a general FAQ page about their own services.  We’ve heard that things aren’t so cool between the companies right now.  Like we said: a tad sticky.

It’ll compete directly against experienced music distribution heavyweights, which is no small thing. Indeed, the crowded space already includes Tunecore, ReverbNation, DistroKid, and CD Baby, just to rattle off a few entrenched names. To undersell the competition, Landr would most likely cut their rates.

+ Pandora Has Stopped Paying Artists Over 50% of Their Money

But perhaps the other trick is to layer in specialized mastering.  And in terms of business modeling, a digital distribution service would complement Landr’s current offering.  The company would likely get your music on Spotify, Apple Music, other streaming services, not to mention iTunes and possibly YouTube.

The company may also choose to bundle optimized track mastering for musicians who use their distribution service. Which is where the competitive advantage could come in.

Landr hasn’t responded to our report. But confirming our original story, Landr has now released their digital distribution site.  You can check it out here.