Arcade Fire Glues Their Latest Album Onto a Fidget Spinner and Sells It for $109. It Sells Out Instantly. 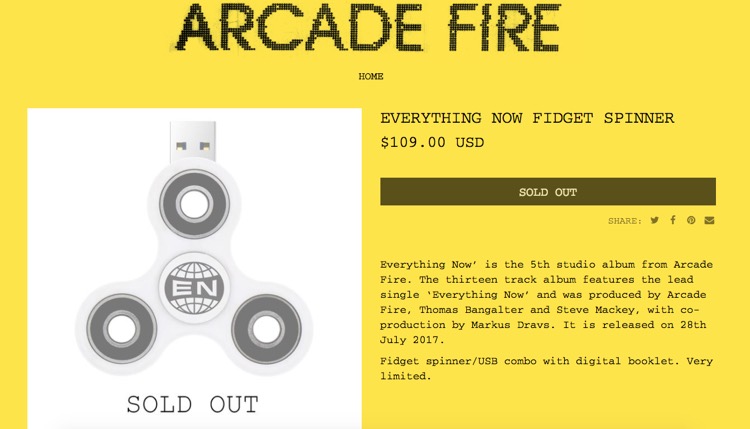 If you’re just finding out about Arcade Fire’s fidget spinner album, it’s already too late.  But did they really exist?

Streaming music platforms like Spotify are exploding, though most artists are getting left out in the cold.  Streaming simply doesn’t pay enough, even for mega-artists with millions of plays.

Enter Arcade Fire, who decided to turn their entire album into a plastic toy and sell it for $109.

Alongside the streaming release of their fifth album, Everything Now, Arcade Fire tried something novel.  They packaged their album into a plastic ‘fidget spinner,’ and offered it to their most dedicated listeners.

The result?  The limited-edition spinners sold out instantly.  In fact, a large number of fans were completely pissed that they couldn’t get one.

But wait: did they really exist?

Here’s where this gets interesting.  Arcade Fire is known for their extremely dry pranks.  That includes the time they introduced a fake Daft Punk at Coachella, or published a fake album review on ‘Stereoyum’.  All of which opens the distinct possibility that this one’s a prank, as well. 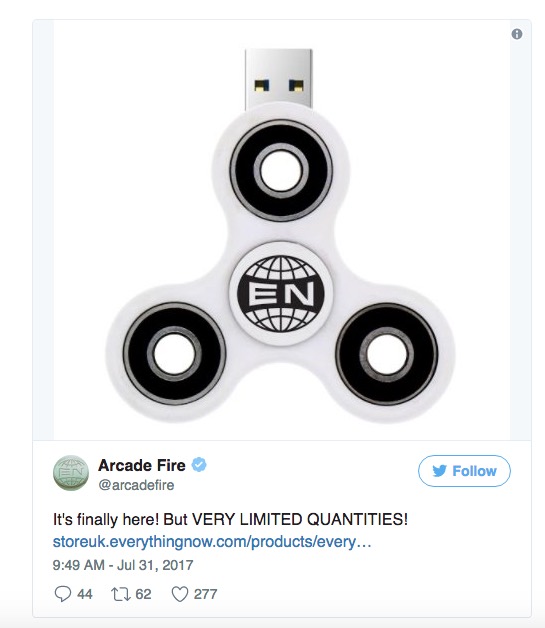 As for the instant sell-out, that could be explained by a pre-order window.  Lets say there were 10,000 spinners.  All of them could easily be snagged before the official sale date.  But we haven’t seen any of these albums posted online, nor heard from any fans spreading the news about their new collectibles.  So, there’s a distinct possibility this was a ruse.

Then again, ruse or otherwise, a lot of people really wanted these ‘sold out’ spinners!  Which means, even if these spinners were imaginary, the demand for them was pretty damn real.

Now I’m gonna listen to the actual album, on Spotify.