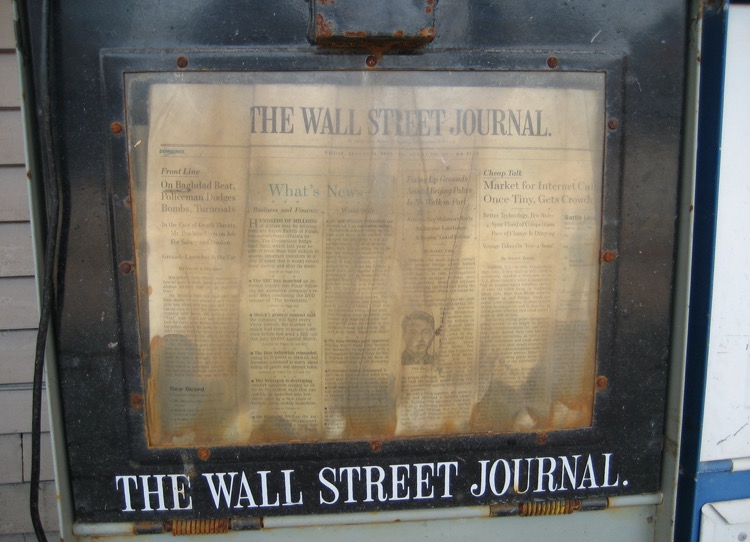 Despite growing consumer interest in vinyl, not everyone likes the format.  Take Wall Street Journal’s Neil Shah, for example.  He’s written two mostly negative pieces on the surge of vinyl.  However, according to Analog Planet, the notably cynical writer may have made up facts to support his position against the format.

In ‘The Biggest Music Comeback of 2014: Vinyl Records,’ Neil Shah wrote that the vinyl business ‘was on its last legs.’  He wrote,

“The record-making business is stirring to life—but it’s still on its last legs.”

Analyzing the article, Fremer discovered that Shah created a “phony narrative.” How did he manage to do that? By “selectively and cynically” using facts about vinyl records.Citing one example, the Wall Street Journal correspondent labeled Thai Plastic Chemicals as “a three-person shop in Long Beach, California.”  A quick Google search reveals that Thai Plastic Chemicals is a worldwide conglomerate based out of Thailand.

Unfazed by something called facts, Neil Shah doubled-down on his anti-vinyl narrative.  At one point, the WSJ correspondent said that despite music producers adding presses,

“there has yet to be a big move by entrepreneurs to inject capital and confidence into this largely artisanal industry.  Investors aren’t interested in sinking serious cash into an industry that represents 2% of total music sales.”

Several months prior to the article’s publication, the largest vinyl plant in the United States announced their expansion.  Nashville-based United Record Pressing said that they hoped to increase production by 30% in 2014.  In a statement to The Tennessean, Jay Millar, the company’s Director of Marketing, admitted that they couldn’t keep up with demand.  United Record Pressing already had six presses running 24 hours a day, six days a week.  This past June, Sony re-opened a vinyl pressing plant in Tokyo after thirty-years.  The push signals that major labels will once again revive vinyl sales.

Continuing on his anti-vinyl tirade, Neil Shah recently published a new article on the Wall Street Journal.  Titled, ‘Why Vinyl’s Boom Is Over,’ the sub-header reads,

“As purists complain about low quality and high prices, vinyl sales taper off; Gillian Welch and David Rawlings cut their own records.”

Without giving any facts to back up his claims, The Wall Street Journal correspondent wrote,

“Old LPs were cut from analog tapes—that’s why they sound so high quality.  But the majority of today’s new and re-issued vinyl albums—around 80% or more, several experts estimate—start from digital files, even lower-quality CDs.  These digital files are often loud and harsh-sounding, optimized for ear-buds, not living rooms.  So the new vinyl LP is sometimes inferior to what a consumer hears on a CD.”

Michael Fremer called out Shah’s complete fabrication that 80% of new LPs are cut from CDs.

To feed his anti-vinyl narrative, the Wall Street Journal correspondent also incorrectly quoted Fremer.  Fremer says he never made this statement to the Journal:

“They’re re-issuing [old albums] and not using the original tapes” to save time and money, says Michael Fremer, editor of AnalogPlanet.com and one of America’s leading audio authorities.  “[They] have the tapes.  They could take them out and have it done right—by a good engineer. They don’t.”

“As more consumers discover this disconnect, vinyl sales are starting to slow. In the first half of 2015, sales of vinyl records jumped 38% compared to the same period the prior year, to 5.6 million units, Nielsen Music data show. A year later, growth slowed to 12%. This year, sales rose a modest 2%.”

As Fremer points out, Neil Shah chose to omit key information. This includes that fact that American plans pressed well over twenty million records last year.  He also chose to use Nielsen/Soundscan’s post-Christmas rush sales chart, from January to June. Most retail sales occur during the Christmas rush, not after. Fremer explains,

“What’s more, Shah’s assertion as to why sales were up only 2% in the first half of 2017 compared to the previous year are based on his fantasies not on facts.  He does not prove causality but blames it on prices and poor quality.”

So, how accurate is Nielsen/Soundscan?  Can journalists and other writers depend on their reports?  Probably not.

Neil Shah has yet to respond to the allegations that he fabricated quotes or used incorrect ‘facts’.   However, Fremer said that he will continue writing against Neil Shah’s false claims against vinyl.

“Shah has published two absurd vinyl articles, one more dishonest and/or clueless than the other. He’s over. And if he’s not, I’ll still write that it is. And why not? He wrote that Vinyl’s boom is “over” and I promise you it is not.”

Image by Infrogmation of New Orleans; front door image by Ogilvy PR (both CC by 2.0)