48% of the Entire Swedish+Norwegian Population Is Paying for Streaming 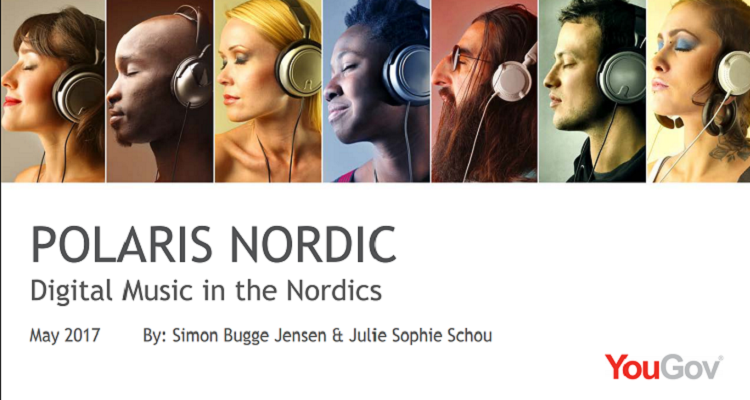 Nearly half of all Swedes and Norwegians are paying for a streaming service. And here’s another interesting fact: more than 60% of people in Sweden and Norway use YouTube.

Across Norway, Denmark, Finland, and Sweden, 80% of inhabitants aged 12 to 65 have used at least one streaming service.  But did you know that most of them are paying for premium streaming services, including Spotify?  Yet even with these premium subscriptions, many people still love to use YouTube.  It’s all part of an evolving picture of how different music services coexist and even feed one another.

YouGov conducted the Polaris Nordic Digital Music Survey in Denmark, Norway, Finland, and Sweden in April and May of this year.  The survey targeted internet users aged 12 to 65 and attracted 4,047 online respondents in these Nordic countries.

YouGov found that free music dominated the streaming scene.  YouTube ranks as the streaming service most used by Nordic inhabitants with a 60% share.  Spotify came in second place with 51%.  iTunes downloads had a 13% share.

That number was most pronounced in Sweden and Norway, where the average subscription level moves to 48%.

For this study, premium/bundled services are:

Free music streaming services (which include trial subscriptions) are:

A bundled service simply refers to a premium streaming service packaged into a broader account.  Most commonly, that is an ISP or mobile account, though the broader bundled number was fairly small.

In Denmark, 75% of the population have used at least one digital music service.  43% have subscribed to a premium service.  31% have used a free music streaming version or a trial.

43% of Danes will access their favorite music through a premium or bundled service.  31% will use a free streaming platform or a trial version.  26% do not regularly used a streaming service.

iTunes in Norway remains popular, though it’s lost a big chunk of its market share

In Norway, 81% of the population have used at least one digital music service.  48% have subscribed to a premium service.  33% have used a free music streaming service or a trial version.

As with Denmark, YouTube ranked as the most used digital music service in the country with a 62% market share.  Its percentage increased 16% from 2015.  Spotify came in second with a 55% share.  It had a 50% market share the year prior.  iTunes came in third with 16%.  Its market share significantly declined, down from 24% in 2015.

48% of the Norwegian population have accessed their favorite tracks through premium streaming platform.  32% will use a free music streaming service and 20% haven’t streamed music at all.

Spotify reigns as king in their home country

In Sweden, 83% of the population have used at least one digital music service.  48% have subscribed to a premium platform.  35% have used a free music streaming service or a trial version.

Unsurprisingly, Swedish streaming platform Spotify came in first place with a 64% market share in 2016.  This number remained unchanged from the year prior.  YouTube skyrocketed to 60%, up 10% from 2015.  As with Norway, iTunes came in third place with 13%, down 4% from a year earlier.

48% of the Swedish population have accessed their favorite tracks through premium services.  35% will use a free music streaming platform and 17% haven’t streamed their favorite songs at all.

In Finland, 82% of the population have used at least one digital music service.  Unlike other Nordic countries, only 22% have subscribed to a premium service, the lowest in the list.  Why the change?  Most people in Finland prefer to stream their music for free.

So, which free music streaming platforms do people in Finland prefer?  Compared to other Nordic countries, YouTube had the highest market share with 69%, up 14% from the year prior.  Spotify also came in second place with a 46% market share, up 8% over last year.  It’s unclear whether this number represents premium streams, ad-supported streams, or a mix of both.  iTunes remained stagnant in third place with an 8% market share, the same as 2015. 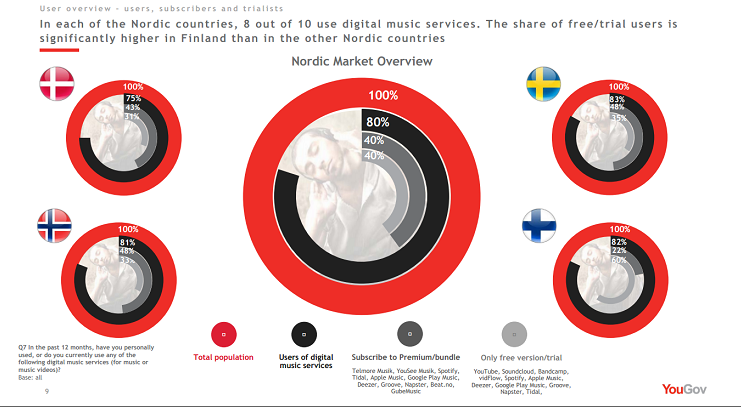 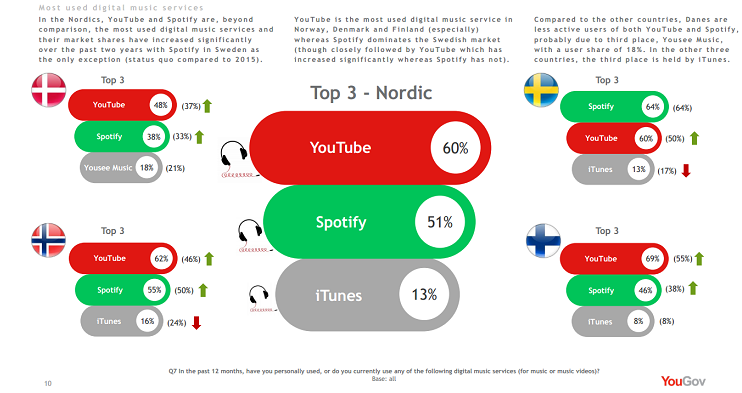 On a weekly basis, YouGov found that three out of four people in Nordic countries will use Spotify and YouTube. 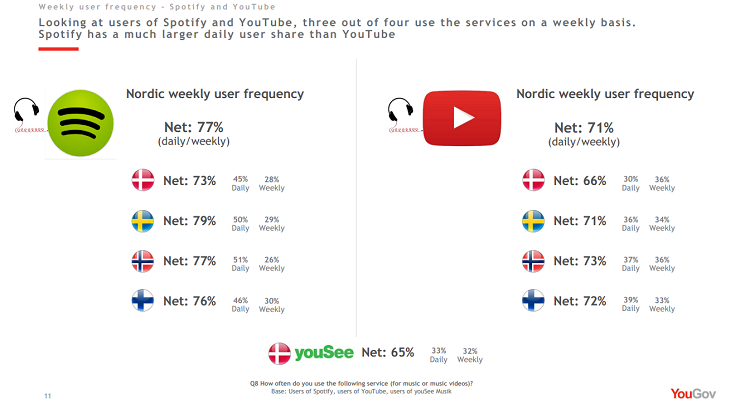 What service do young people prefer to use?

Spotify ranked as the most used streaming platform for those aged 12 to 17.  In Finland, 72% of teenagers streamed their favorite music on the platform.  Sweden and Norway tied with a 74% share.  Denmark came in last place with 67%.

In only one Nordic country, YouTube outperformed Spotify with teenagers aged 12 to 17.  74% of Finnish teens used the platform to stream their favorite music.  Sweden had a 73% share with the same age group.  Denmark and Norway had a 64% and 63% share, respectively.

What about older audiences?

One key thing to note about YouGov’s study is older audiences’ listening habits.

Most people aged 50 to 65 prefer to use Spotify.  20% in Denmark listened to their favorite tracks on the platform.  In Sweden, the percentage increased to 25%. Spotify had the highest older audience share in Norway with 30%.  In Finland, only 26% of older audiences streamed their favorite tunes through Spotify.

For the older audience market, YouTube had its highest share in Sweden with 23%.  20% preferred YouTube in Finland, and 19% in Norway.  Only 10% of older audiences in Denmark used the Google-owned platform. 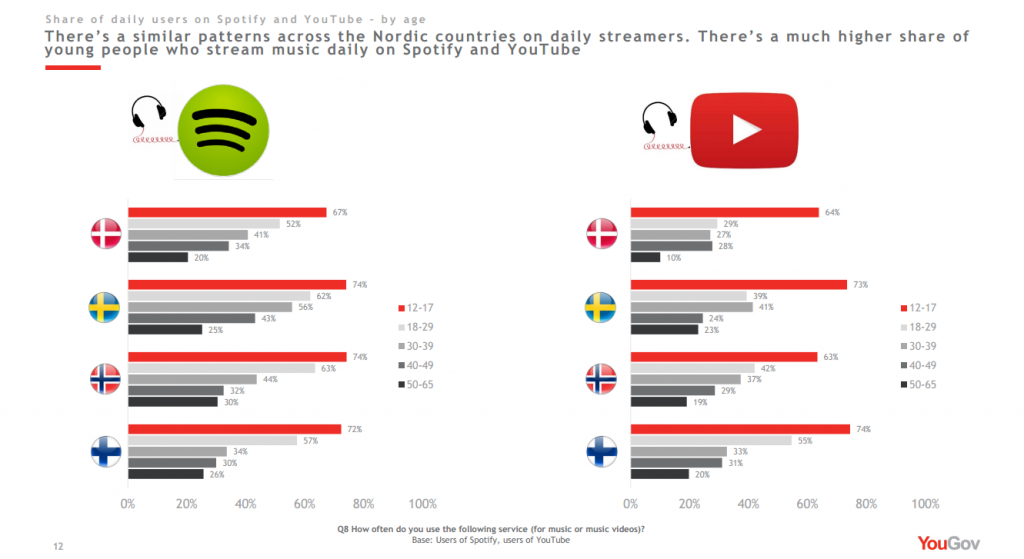