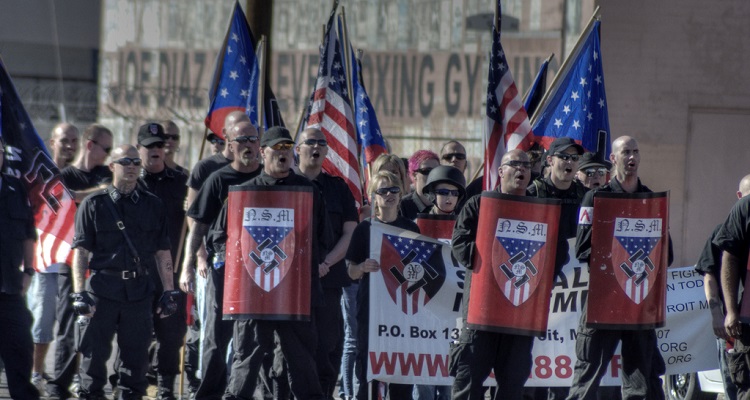 Google, CD Baby, Deezer, and Spotify say “NO” to hate-filled music on their platforms.

In the wake of deadly neo-nazi protests in Charlottesville, Digital Music News found that users on Spotify could easily stream music from thirty-seven white supremacist, neo-nazi groups.  The move prompted the company to quickly take down several bands from its app.  Spotify also released a statement that other bands were under review.

Now, Google, CD Baby, and Deezer have taken action against bands that promote discrimination and racism on their platforms.

In 2014, the Southern Poverty Law Center (SPLC) published a list of fifty-four white supremacist, neo-nazi groups on iTunes.  The report prompted Apple to quickly take down the groups’ catalogs.  But instead of disappearing altogether, the bands simply transitioned to popular streaming platforms to reach a new audience.

Following the publication of DMN’s article, Spotify released this statement.

“Spotify takes immediate action to remove any such material as soon as it has been brought to our attention.  We are glad to have been alerted to this content — and have already removed many of the bands identified today, whilst urgently reviewing the remainder.”

“Deezer does not condone any type of discrimination or form of hate against individuals or groups because of their race, religion, gender or sexuality.  We are in the process of swiftly and actively reviewing the content on our platform and have begun and will continue to remove any material that is in any way connected to any white supremacist movement or belief system.”

In a statement to Variety, a Google spokesperson said,

The company also promised to remove any content that violates these policies.

Variety underscored the difficulty users have when flagging content on Google Play Music.  Unlike YouTube, it doesn’t offer a direct option to easily report questionable music.  To flag a discriminatory track, users will have to file feedback from a separate menu.

“We believe hate speech is particularly odious, and we try not to carry it, per our hate speech policy.  CD Baby does not intentionally distribute content that promotes violence against persons of a specific race, color, religion, nationality, gender identity, or sexual orientation, and we reserve the right to refuse submissions of this nature, or to cancel submissions that fall into this category at any time.”

Maddux added that they will work closely with the CD Baby community to identify and quickly take down hate-promoting tracks.

“We carry over 8 million songs that hundreds of thousands of artists self-distribute on the CD Baby platform, and it is impossible to screen every song for objectionable content.  Our practice has been to encourage our community to let us know if there is content available on our site that violates these guidelines.

“Reports of hate-promoting music are taken very seriously and we are making every effort to flag and vet tracks of concern.  In the event we find content in violation of these guidelines, we will take it down.”

The statements signal a strong push by the music and tech industries to address the issue of policing discriminatory content online.  For example, both PayPal and Apple Pay have refused to support websites selling white supremacist material.  And Google and GoDaddy booted popular neo-nazi website The Daily Stormer from their respective hosting services.  Indeed, Cloudflare practically crippled the site by discontinuing internet routing to the site.

Not everyone has agreed with these moves, however.  The Electronic Frontier Foundation (EFF) lambasted Google and GoDaddy’s response to The Daily Stormer.  And Cloudflare only severed their support after the Daily Stormer claimed that the company was secretly supporting white supremacist ideology.

In a statement, the EFF said,

“We strongly believe that what GoDaddy, Google, and Cloudflare did here was dangerous.

“Because internet intermediaries, especially those with few competitors, control so much online speech, the consequences of their decisions have far-reaching impacts on speech around the world.”

“We wholeheartedly agree with the concerns raised by the EFF.  They reflect the same concerns we raised in our blog.“

Accordingly, Cloudflare’s complete statement on the Daily Stormer situation can be found here.