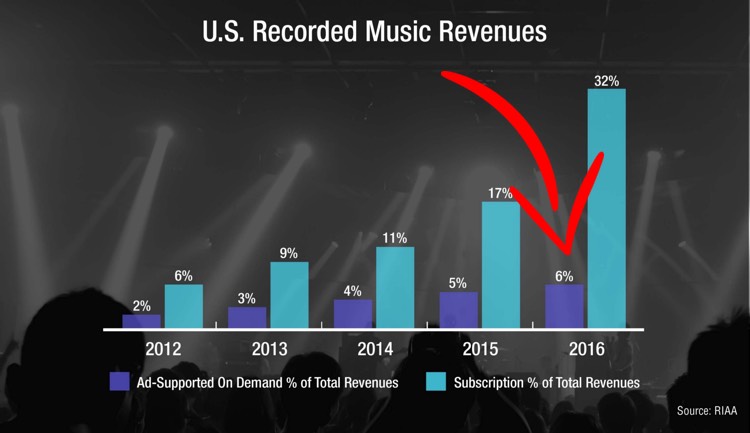 Free streaming contributes a pittance to the overall music industry.  So why not just kill it?

Right now, the music industry is losing its war against YouTube.  But maybe that’s because they haven’t yet deployed the nuclear option.

That is, turning the lights off entirely on free music streaming.

According to separate sources at major music content groups, a free streaming shutdown is now on the roadmap.  More specifically, the plan would involve a concerted effort by the ‘big three’ major labels to terminate free access on both YouTube and Spotify.

The terminations would occur after an agreed-upon threshold of paying streaming subscribers is reached.  In just 2-3 years, that threshold could materialize.

In order to enforce the transition mandate, the labels will threaten pullback on critical music licenses.  That is proving a highly-effective tactic, and one used successfully against Spotify several months ago to implement ‘windowing’ for high-profile releases.

Accordingly, terminating free isn’t a new thought — just as windowing was simmering for years.  In fact, a second source said ‘shutting it down’ has been actively under discussion for years.  But tricky politics between artists, YouTube, Spotify, and internal debate made that impossible.

On top of all of that, a faction within the industry has strongly felt that free streaming has marginalized piracy, and that this ‘starvation process’ should continue.

Fast-forward to 2017, and piracy is waning.  One industry source says it’s become ‘like speeding’ for many rights owners.  “It’s always going to be there,” the source relayed, while noting it’s “no longer the focus” for many major label execs.

All of which is shifting the momentum towards streaming stage two, which involves a ‘hard transition’ away from free tiers.  And the logic behind the move is this: more and more people are paying for premium streaming accounts.  At a certain point, those subscribers will be contributing enough money to keep the industry healthy.

So why not shut down the ‘bad customers’ and make them pay?

Actually, this plan isn’t such a secret.  Back in February of 2016, Sony Entertainment CEO Michael Lynton etched out the broader agenda.  “I think [free access] stops probably when you get over a — I don’t want to say the number, but… many, many-fold bigger than what we have in the current paying subscription world,” Lynton told Re/Code.

That was back when Spotify had 25 million paying subscribers.  And for the record, Lynton also pointed to premium windowing as well.  Several months ago, major labels started inking deals with Spotify that called for ‘gated access’ to content from popular artists like Taylor Swift.  Just like clockwork.

“They’re going to window,” Lynton relayed.  “So you’re going to first hear the music in a subscription service, and then later in a free service, rather than the other way around.” 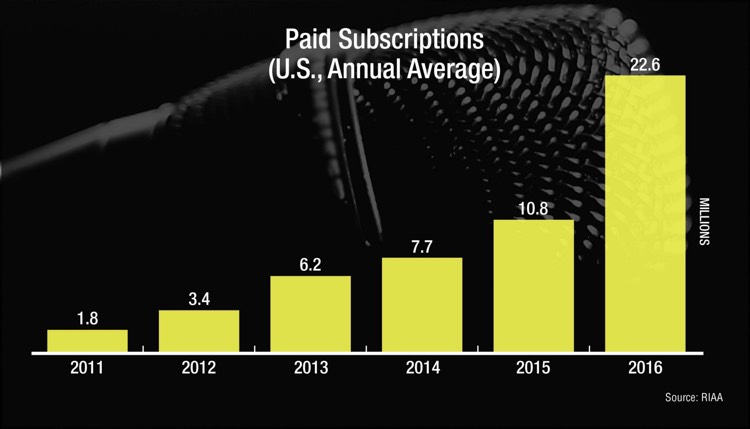 And what about the ‘freemium funnel’?  Historically, Spotify CEO Daniel Ek has reportedly been adamant about protecting the existence of freemium.  Basically, the ‘funnel’ theory states that paid subscribers typically start as free users.  According to Spotify, it’s a critical stair-step towards getting people to pay.  And there’s plenty of data to suggest that this is true.

Then again, Ek was also strongly opposed to windowing (at least according to our sources).  Ultimately, he was forced to concede against heavy label pressure.

And major labels seem to be deciding when — not if — they should pull this trigger.

So what’s the magic number?   At present, the industry counts more than 100 million paying subscribers worldwide.  But what if Spotify itself had 100 million?  That’s just one ‘sweet spot’ that was tossed around.

Currently, Spotify has 50 million paying subscribers, a number that could theoretically double by 2019.  At that stage, a massive percentage of music fans are paying.  And it would offer ample justification to ‘build the wall’ a-la Apple Music.

Actually, ‘shutting down YouTube Music’ is easier than we thought.  On Google Search, links to torrent hubs and MP3 download sites are difficult to scrub, simply because of DMCA abuse.  Google removes a link, and it returns the next day.  It’s a longtime loophole that Google protects with its life.

But on YouTube, a sophisticated ContentID infrastructure can both identify and remove content on the spot.  And according to the tech CEOs we’ve spoken with, part of the secret is simply knowing how to properly use ContentID (hint: the majors haven’t really learned that part yet).

All of which opens the distinct possibility that YouTube will soon be forced to transition towards paid.  Or, pay a lot more for the content they’re using.

According to our sources, that’s a serious consideration.  But it’s a counterargument getting overruled, especially since the industry will have more money to shut down pirates.  Still, it remains uncertain whether a ‘hard stick’ enforcement regime can actually work.  Just recently, a study concluded that major label anti-piracy efforts have had little effect on broader piracy levels.  Instead, the ‘fix’ came from ad-supported streaming.

Enter the Nordic countries, which continue to offer an alternative glimpse at this future.  According to a study just released, nearly half of the populations of both Sweden and Norway are paying for streaming music.  Even more astounding is that more than 60% of them are using YouTube — concurrently.

All of which suggests that a free tier can coexist with profitable, robust paid subscription levels.  Maybe there’s room between the extremes?