Someone Tested 25,700 Ecstasy Pills at Festivals Around the World. Here Are the Results. 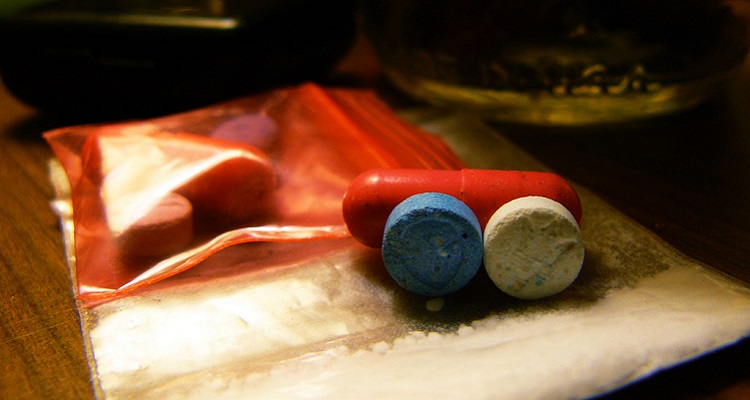 You have no idea what you’re putting in your mouth.

In the past eighteen years, the United States has seen a 763% increase in psychostimulant-related deaths.  Analyzing 25,700 MDMA reports from around the world, American Addiction Centers found a shocking fact.  As summer concerts near, the strength of ecstasy has increased fivefold in the past few years.

Pure ecstasy has only one ingredient: MDMA.  Oftentimes, dealers modify the drug to include deadlier chemicals designed to produce the same effect.

Those modifications can kill.  In 1999, according to a report by the White House National Drug Control Strategy, 563 people died from psychostimulants.  Up until 2001, the number of deaths had remained steady.  However, since 2002, that number has risen, first peaking in 2005 with over slightly 1,500 deaths.

The number soon skyrocketed, with the US reporting 4,300 psychostimulant-related deaths in 2014.

According to the National Institute on Drug Abuse, over 10% of all people aged 18 to 25 have consumed ecstasy.  School-aged children have also consumed some variant of the drug.  In fact, nearly 7% of people aged 12 and older have tried it at least once.

Accordingly, serious medical situations are arising.  Last summer, three twelve-year-old girls were hospitalized after consuming an ecstasy variant popular among preteens known as “teddy tablets.”  In 2016, the White House found that over 22,000 people had been hospitalized due to ecstasy-related symptoms.  Typical side effects included anxiety, nausea, heart failure, and often times, death. 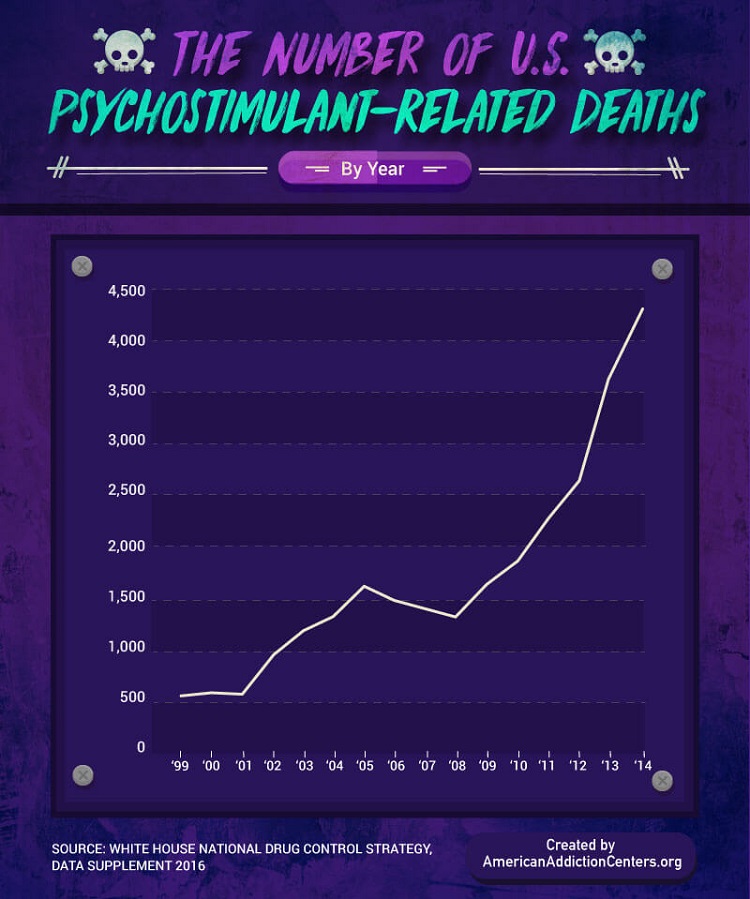 Pure ecstasy has only one ingredient: MDMA.  But don’t expect to consume ‘pure pills.’

In February, a young Australian woman passed away after consuming ecstasy without any MDMA at all.  She had suffered seizures after consuming a fake batch and died at a local hospital.  A month earlier, three teenagers in Melbourne had died after consuming a similar batch.  Seventeen others were hospitalized.

After analyzing the reports, American Addiction Centers found that drug dealers had adulterated nearly half of MDMA pills sold.  Only 55.2% of pills contained pure MDMA. 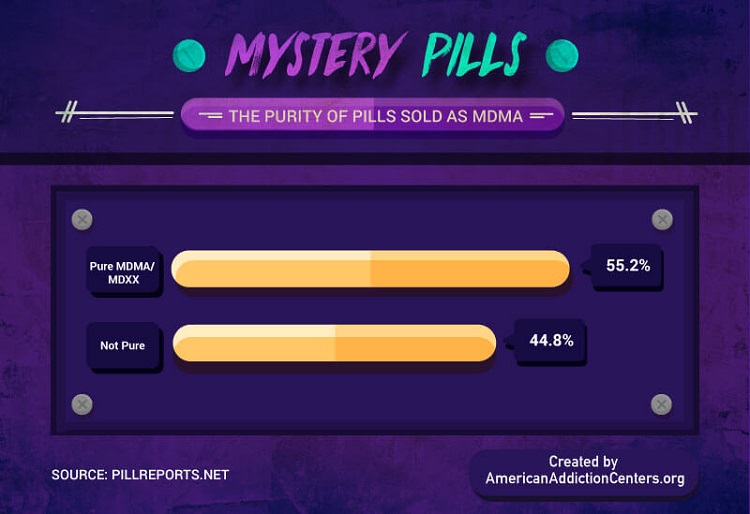 So who manufactures the purest ecstasy pills?

Enter MDxx, which contains a similar structure to pure ecstasy.  It’s a perfect substitute, and most testing kits can’t distinguish between the two.  Australia had the highest batch of MDxx pills at 31.6%, with Turkey and the UK following right behind with 23.2% and 21.4%, respectively.  The United States had a 20.9% MDxx purity rate.

But here’s where this gets scarier.  In the US alone, more than one in six pills contained unknown substances that scientists couldn’t identify.  And over 8% of ecstasy pills also contained a mixture of MDXX and amphetamines (known as speed or meth).  In Turkey, 1.6% of ecstasy pills contained PMA (paramethoxyamphetamine).  This mimics the drug’s effects but can be up to ten times deadlier.  Often times, consuming PMA leads to death. 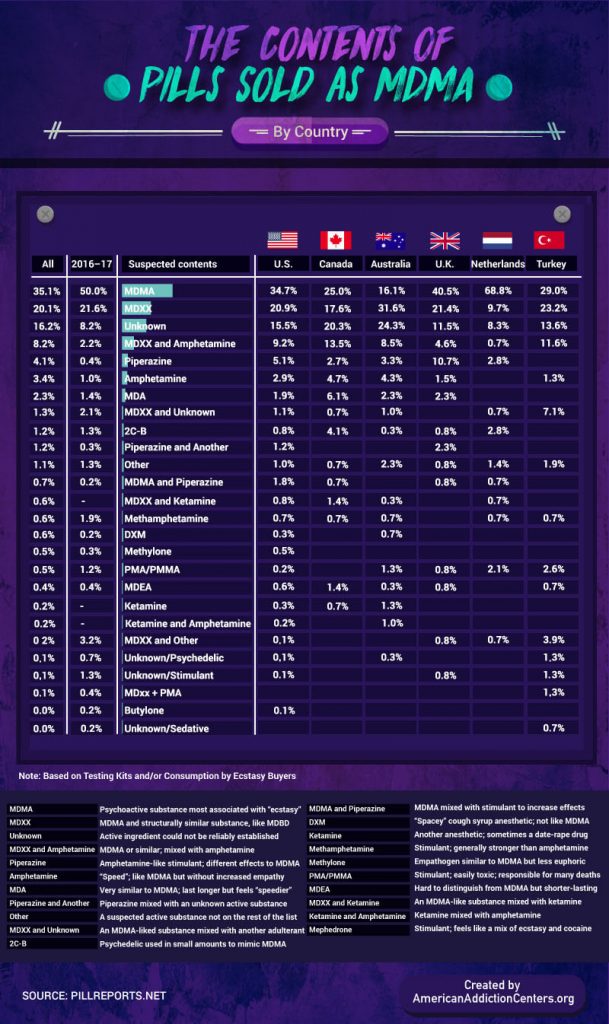 Have you truly consumed ecstasy?

According to American Addiction Centers, most ecstasy pills sold over the past twelve years contained some amount of MDMA.  However, looking at data published by Pillreports.net, the second most common ingredient in ecstasy pills was an unknown substance.  In 2012, the DEA found more than eighty unique chemical compounds in drugs marketed and sold as “Molly.”

Amphetamines (like speed and meth) have decreased over time.  However, alternative components have increased.  2C-B, an illegal alternative to MDMA, has increased in the past five years.  In the UK four years ago, six students aged 19 to 22 went to the hospital after purchasing 2C-B online. 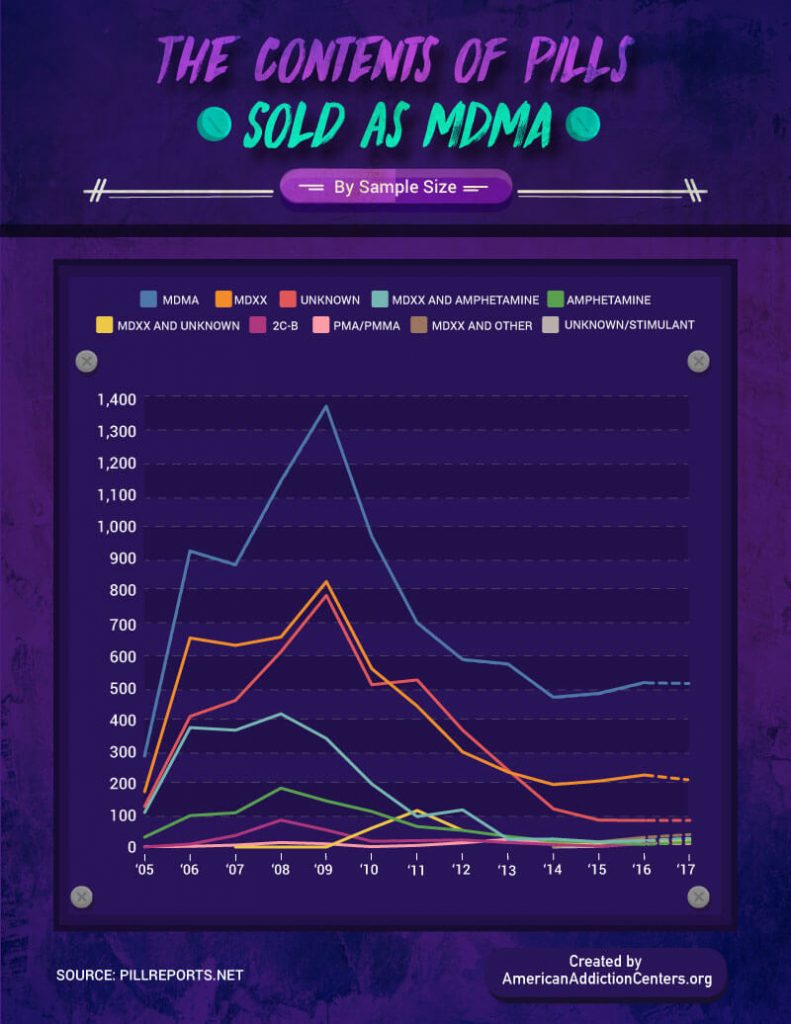 An increasing number of children and preteens have consumed ecstasy.

Differing from the National Institute of Drug Abuse’s report, DrugAbuse.gov found that over 13 percent of young adults aged 18 to 25 have taken MDMA.  In the past several years, an increasing number of children and preteens have reportedly consumed the drug.

At the Electric Zoo Festival in New York City in 2013, two Syracuse University students died after overdosing on Molly.  Six others had also overdosed but survived.  Two years ago, a seventeen year old girl in Colorado Springs overdosed on a form of MDMA. 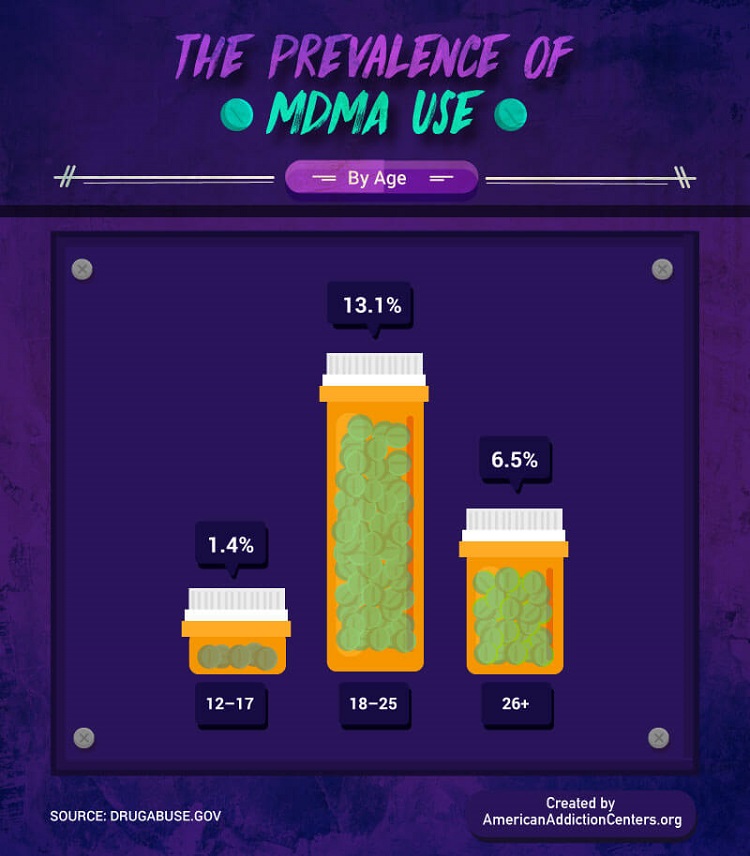 Do you think your ecstasy pill was pure?

After submitting their pills to PillReport.net, most people incorrectly guessed whether they consumed pure ecstasy.

PillReport.net analyzed over 22,000 pill samples.  They found that over 71% of users believed that the drug they consumed was adulterated.  Only 28.7% believed they had taken pure ecstasy.

So why did they believe that the pills were adulterated?  Due to the negative impacts of MDMA.  After examining the drugs, PillReport.net found that 55% were indeed pure MDMA.  However, less than 29% of men and women had correctly assessed the quality of the pill. 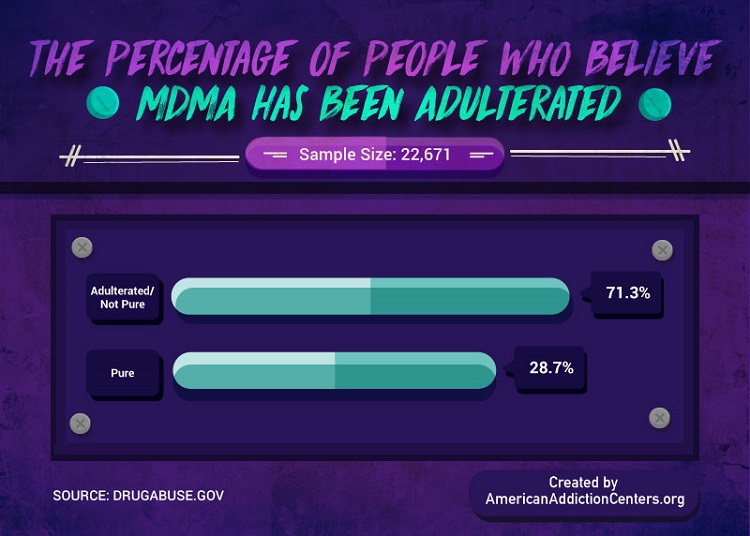 After analyzing the 25,700 reports, American Addiction Centers came to the following conclusion:

“The strength of ecstasy is increasing, and the drug in 2016 was five times as strong as it might have been in 2009.”

In a statement, Dana Hummel, a spokesperson for the company, said,

“Ecstasy is increasingly becoming popular around the world.  Unfortunately, a lot of MDMA pills are being cut to include other, potentially more dangerous substances such as methamphetamine, ketamine, and PMA.  The main goal of this study is to educate readers about how often pills sold as “pure MDMA” are actually not pure.

“My team at AmericanAddictionCenters.org connects people and their families with the information and resources to help them recover from substance abuse.  With this, they also create unique and exclusive research to further spread awareness about these topics that affect many Americans today.”

If you’d like to find out more information about American Addiction Centers, you can visit their website here.