7 Startling Facts About the Music Industry in 2017 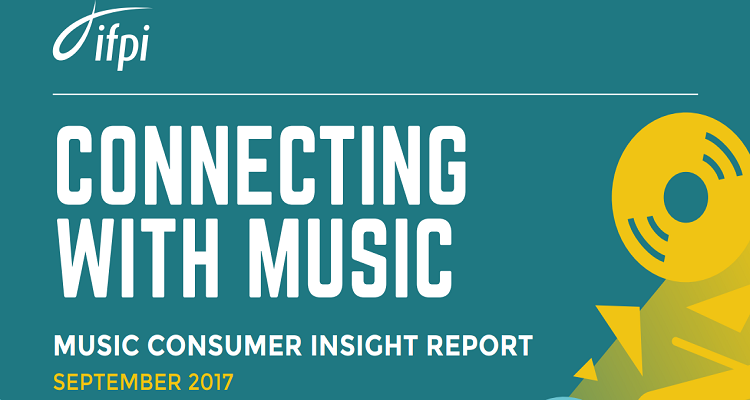 Did you know that 96% of all internet users consume licensed music?  And 46% of all music streaming happens through YouTube?

Here’s a quick breakdown of the report, underscoring the state of the music industry in 2017.

Fact #1: Nearly half of all on-demand streaming is done through YouTube.

Globally, 45% of internet users around the world listen to their favorite music through a licensed audio streaming service. This number increased 8% from 2016. 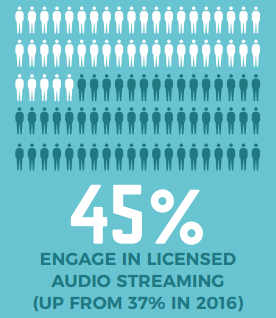 Beyond that, 23% of users listened to music through paid audio streaming subscriptions.  22% used a free, ad-supported service. 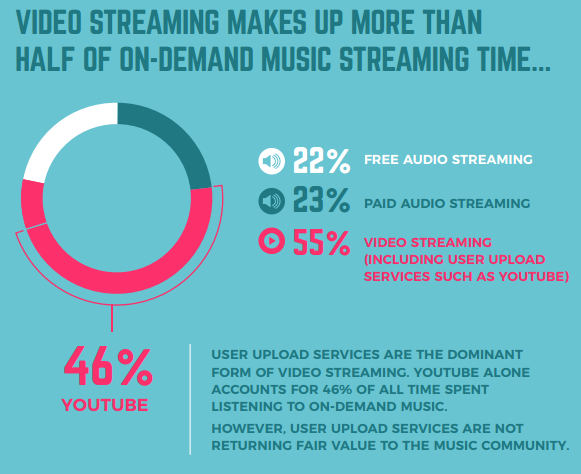 The IFPI found that music consumers have become more engaged than ever with licensed music.

The stats are surprising.  96% of all internet users consume licensed music.  This includes through audio and video streaming, physical purchases, digital downloads, and radio (both broadcast and online).

The IFPI also noted that 50% of internet users have paid for licensed music in the last six months. 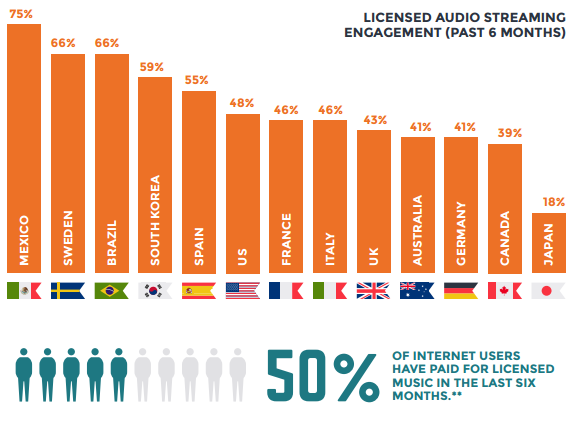 Today’s consumer engages with music through one of four methods.

Building on what the IFPI noted above, 45% of all surveyed consumers use audio streaming services for music.  Of those 45%, 39% stream their favorite tracks and albums through a free, ad-supported service.  27% use a paid streaming platform. 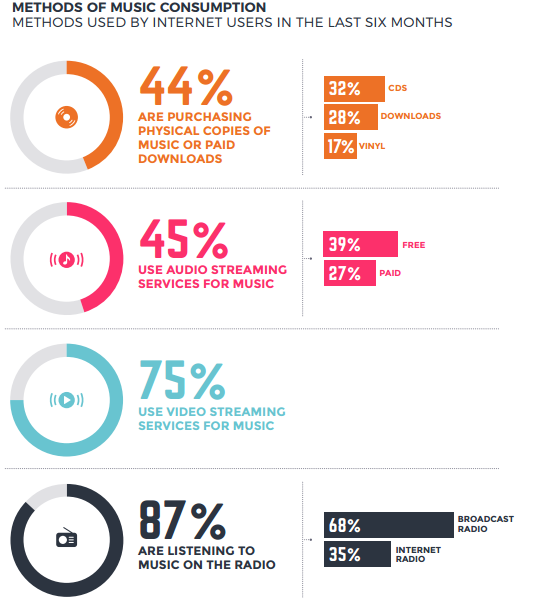 The IFPI also took the top 10% of music consumers from each of the thirteen countries analyzed.  They broke down the share of time spent listening to licensed music sources in a typical week. 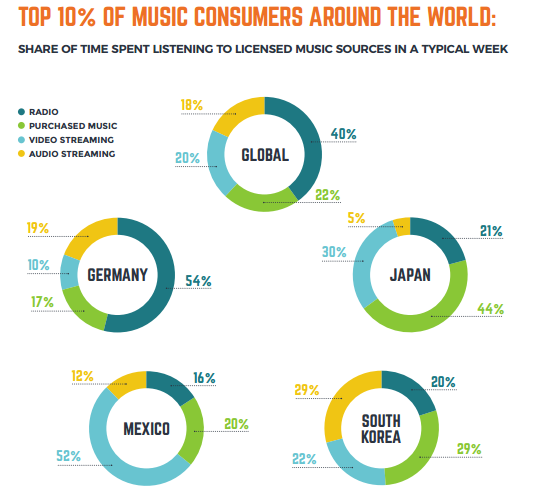 Fact #4: Almost every paid audio streamer uses their smartphone to listen to music.

Today, more people from around the world prefer listening to music on their smartphone.  The IFPI saw this increase across all age groups from 16 to 54.

In reported smartphone usage for music, Mexico came in first place.  91% of all Mexican consumers use their smartphones to listen to their favorite tracks.  Brazil and South Korea ranked behind Mexico with 85% and 80%, respectively.  The United States came in seventh with 63% of consumers listening to music through their smartphones.  Canada and Japan took the final spots with 52% and 44%, respectively.

The IFPI also noted that 90% of all paid audio streamers use a smartphone for music listening.

Fact #5: A significant number of teenagers pay for streaming.

In their study, the IFPI found that 13 to 15 year olds have demonstrated high levels of music engagement.

85% of teenagers from this age group use streaming platforms to enjoy music.  Of those 85%, 79% use a video service and 67% an audio platform.

The IFPI also broke down the number of those who used audio platforms.  Of those 67%, 37% use paid streaming services.  62% used free, ad-supported platforms.

33% of those who use audio streaming platforms paid for their own music streaming subscription.  36% are part of a family subscription plan. 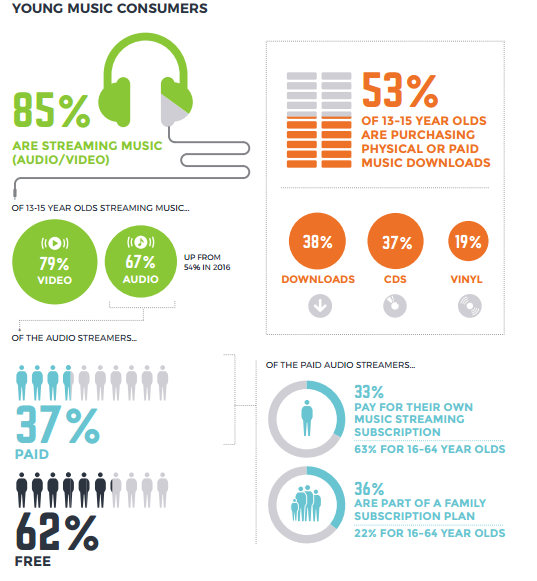 Most people listen to music on YouTube.  Yet, according to the IFPI, the service doesn’t pay a fair value to the music industry.

Last month, 85% of YouTube users used the site for music.  It has an estimated 1.3 billion users.

The IFPI also added that very few users discover music on YouTube.  A whopping 76% of all YouTube music users listen to songs that they already know. 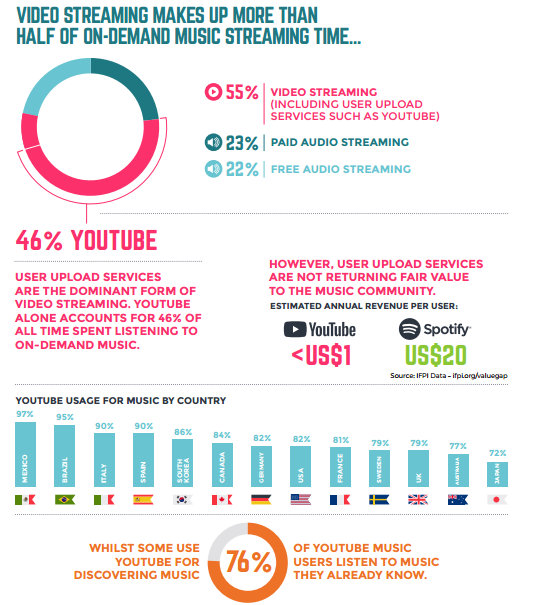 Today, more users prefer to listen to music through paid or free streaming platforms.  However, the IFPI found that piracy has risen this year. 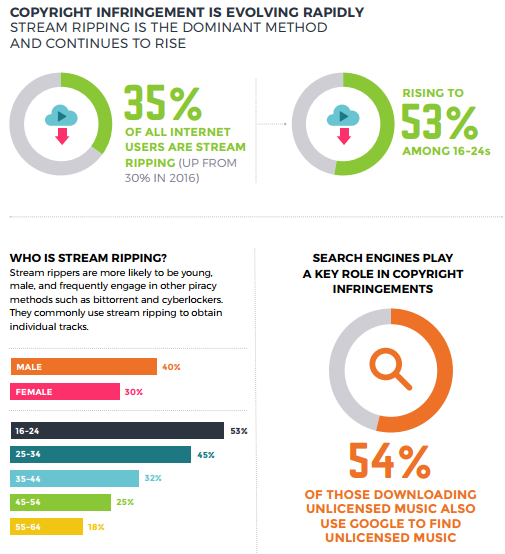 But with nearly everyone engaging with licensed platforms and file-sharing down dramatically, is there really a piracy problem anymore?

“This report shows some amazing trends defining this new era, how fans around the world are enjoying recorded music and connecting with the artists they love in so many ways.

“The increasingly digital global music environment did not just happen.  It requires an enormous amount of work from record companies and their partners to license over 40 million tracks to hundreds of digital services around the world.

“The report also highlights the ongoing challenges for the industry.  It provides further evidence of the Value Gap –  the mismatch between the value that user upload services, such as YouTube, extract from music and the revenue returned to those who invest in and create it.  The global music community is united in urging policy makers to act to address this.”

You can check out the complete study here.