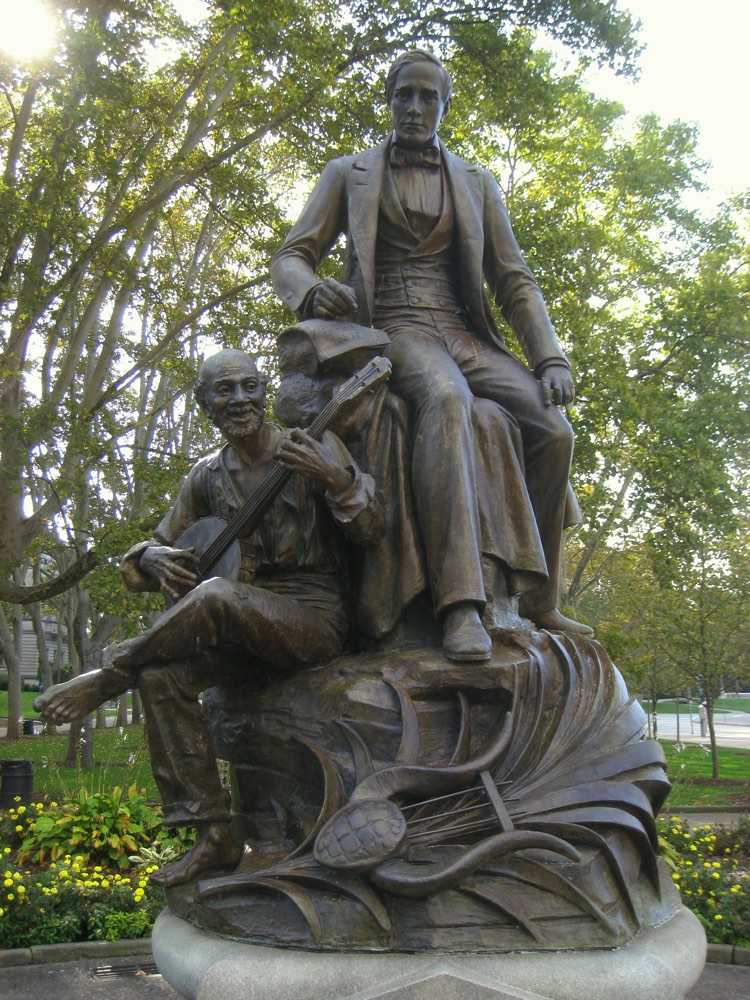 Stephen Foster is one of America’s most celebrated composers.  But is a statue commemorating his legacy simply racist?

Stephen Foster is one of America’s greatest songwriters, and a celebrated musical figure.  And if you don’t know his name, you definitely know his music.  Amongst his greatest hits: ‘Oh! Susanna,’ ‘Camptown Races,’ and ‘My Old Kentucky Home,’ among many others.

Most composers are lucky to be recognized in their lifetimes.  Stephen Foster’s songs are still sung 150 years after his death.

But Stephen Foster’s legacy is rooted in racism.  As a composer, Foster made a living composing for ‘blackface’ minstrels, an extremely popular musical theater genre in the 1800s.  And ‘blackface’ is exactly what it sounds like: white actors putting on black make-up, then dancing around like buffoons in front of a laughing white audience.

The cartoonish caricatures of black (mostly enslaved) Americans were rarely flattering.  But they apparently depicted slaves as having musical talent, which comes out in the statue depicted above.

A happy slave, playing banjo barefoot while a distinguished Foster hovers above.  Charming.

Ah, we’ve come a long way, though Pittsburgh residents want to wash that dirty legacy away.   Just like the Confederate statues dotting American parks and public spaces, this Stephen Foster statue is also coming under assault.

But should it be removed?

One of the questions is whether Stephen Foster was a racist himself.

But that’s a question that gets really tricky, really fast.  Foster thrived in the blackface minstrel genre, which of course dehumanized and caricatured black people.  Among his musical mentors was a blackface entertainer.

But defenders of the composer note that Foster often humanized slaves and black people, and even tried to elevate the genre from its lowly, deeply-insulting rhetoric.  For example, the ‘Nelly’ in “Nelly Was a Lady” was a black woman, and it was remarkable for the time to call a black woman a ‘lady’.  Apparently that was a first for its time.

If only the man could have seen Beyonce.  But, maybe that was 150 years in the making.

Foster also rallied behind Abraham Lincoln and helped to recruit soldiers to fight the Confederacy during the Civil War.  And he did that with musical weaponry, setting “We Are Coming, Father Abra’am” to song.   Even one of Foster’s best friends was an abolitionist.

But does any of that make this statue more palatable?  Or, make Foster’s statue any more acceptable than a statue of, say, Robert E. Lee?

Sculptor Giuseppe Moretti finished the statue in 1900.  That might explain the liberal use of anti-black imagery, though Moretti may have also aimed to create a realistic piece of historical art.   That reality, of course, wasn’t so pretty.

But perhaps the bigger question is what demolishing this statue accomplishes.  Indeed, it wipes away another vestige of an ugly past.  But perhaps it also erases a marker of the progress we’ve actually made.