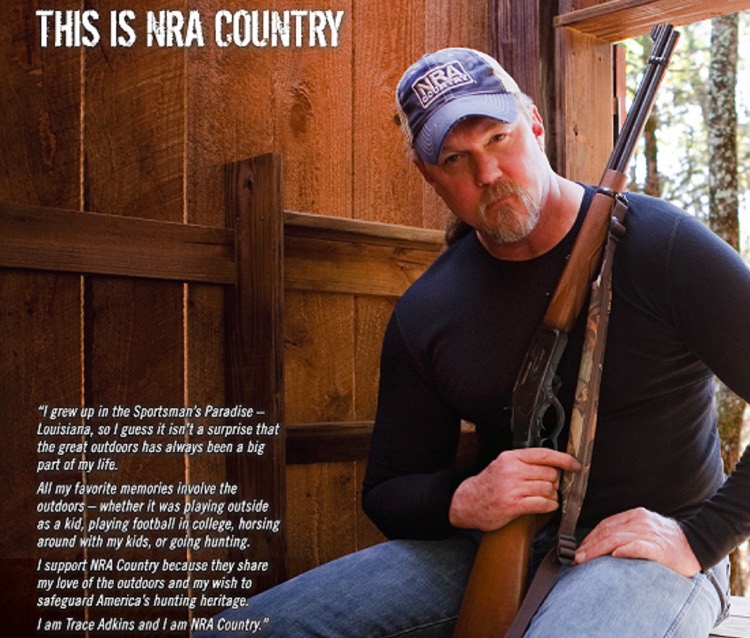 Trace Adkins, one of several country artists standing by the NRA.

Despite the hellish events in Las Vegas last week — at a country music festival — country artists remain adamantly opposed to gun control.  In fact, very little has changed in the country music world.

In the wake of the worst mass-shooting in US history, country artist Caleb Keeter reversed his position on gun control.  It took a mass shooting involving hundreds of victims to convince him that unfettered gun access and absolute 2nd Amendment protections might be the wrong path.

Jennifer Nettles of Sugarland also joined the call for more gun control.  And we’ve learned of a two country artists that have quietly severed their ties with the NRA since the Vegas tragedy.

But for the most part, country artists are either saying nothing or standing firm in their support of the NRA and 2nd Amendment.  And there’s a die-hard coalition that isn’t backing down.

In fact, a coalition of 37 artists are proudly listed on the NRA website, many posing with guns or NRA hats.

And of the 39 artists affiliated with ‘NRA Country,’ an NRA-sponsored support program for country artists, just two have left since Vegas.

Here are the 37 who remain ardent supporters:

Rolling Stone reports that two artists removed themselves from the site after the massacre: Florida Georgia Line and Thomas Rhett.  They said they have no ‘active relationship’ with the NRA, but were previously allied with the group.

Luke Combs also said he had no affiliation with the NRA, but still remains on the site (wearing the hat).  Everyone else has been quiet, except for Love and Theft, who reaffirmed their support for the NRA.

These affiliations are part of a long relationship between the NRA and country artists.  And they’re probably financial deals.

In fact, it’s widely believed that the NRA is paying all of these artists for their support.  The result?  A positive bridge to most of the states and audiences that the gun industry needs.

“It’s no secret,” the Director of NRA Country once remarked. “If you poll our members, they love country music.”

All of which may explain why Caleb Keeter didn’t start a trend.  In fact, we’ve heard of a culture of fear affecting country music artists.  Most are petrified of losing their audiences over political issues, similar to the fallout endured by the Dixie Chicks back in 2003.

“People worry about being Dixie Chick-ed.”