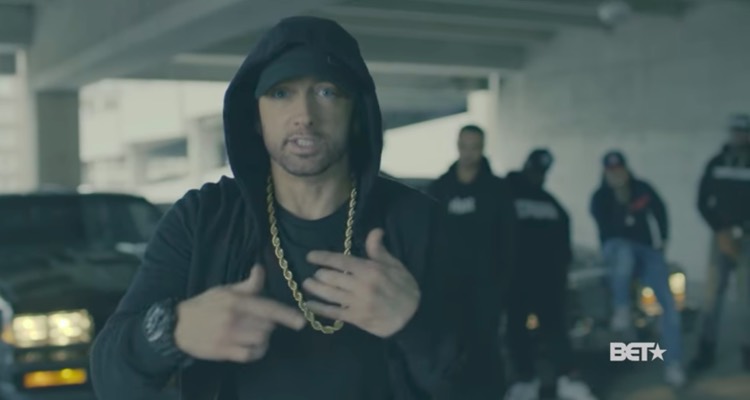 Eminem could become the face of rap’s anti-Trump fury.  And last night’s enraged freestyle was just a prelude.

During BET’s Hip Hop Awards on Tuesday night, the rapper dropped an emotionally-charged freestyle, with Trump brutally excoriated.  By the end, the rapper quickly disavowed any fans who also supported Trump, telling them in no certain words: ‘fuck you’.

It was a ‘line in the sand’ from an extremely angry Eminem.  And a bold move against handlers who advise musicians to steer clear of politics.

Almost immediately, the freestyle stirred support from a long list of athletes, rappers, and other public figures.  The video of the freestyle has already garnered 8 million views, and is YouTube’s top-trending video.

The powerful poetry also attracted nods from a legion of high-profile athletes, starting with Colin Kaepernick himself. “I appreciate you @Eminem,” Kaepernick quickly tweeted.

The rapper mentions ‘Colin’ by name in the freestyle.

Others piled in.  LeBron James also supported the freestyle denouncement, alongside rappers like Diddy and J. Cole.

That support soon stretched beyond music and sports.  Accolades soon poured in from Ellen and Keith Olberman, both longtime anti-Trump voices.  “After 27 years of doubts about rap I am now an @Eminem fan,” Olberman tweeted.  “Best political writing of the year, period.”

The powerful freestyle is just a taste of an upcoming album release.

According to details tipped to DMN this morning, Eminem is preparing a major anti-Trump release.  “You might even hear that freestyle as track 1,” one source relayed.

This part wasn’t confirmed.  But hey, it would be a hell of an opener.

+ I’m Donald Trump. And I Endorse Slim Shady for President of the United States.

Another noted that “not every [album] track is about Trump,” but “he’s definitely letting his feelings be known” with the album.  At this stage, we’re unclear when Eminem is dropping his new album, though expect something “sometime in November,” but “not sooner than that”.

Coulter blasted back, slamming the rapper as an ‘idiot’. “I think it’s unfortunate that the left, from Berkeley to Eminem with his rap songs, has normalized violence against women, as Eminem has done,” Coulter stated.

That’s the sort of division that other artists have shied away from.  Perhaps most notably, Taylor Swift has channeled her rage towards Kanye West and Kim Kardashian, basically drivel in the current climate.  But that’s a calculated move designed to maintain a giant tent of fans, while keeping politics out of it.

Eminem has long thrown away that possibility.