Company Adds the Word ‘Blockchain’ to Its Name. Shares Jump 425% In One Day. 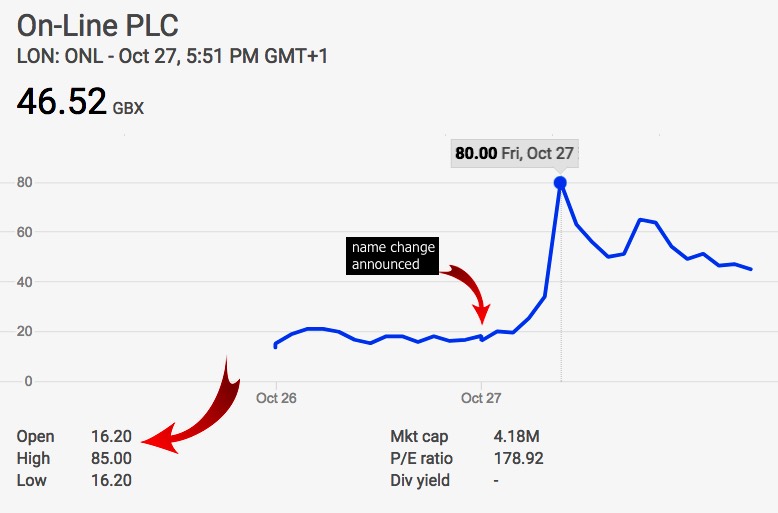 What’s in a name? Millions if that name includes ‘Blockchain’.

I’m not sure if this is a good sign for blockchain.  But it’s great news for a company known as ‘On-line PLC’.  Or, rather, ‘On-line Blockchain PLC’.

That simple name change prompted a 425% surge in the company’s stock price.  After languishing on the London Stock Exchange’s small cap AIM at $16.20, buyers shot shares past $80 after the name change was published.

The jump highlights the heavy hype around blockchain and cryptocurrencies in general.  That has seeped into the music industry, raising questions of how impactful the technology will be.

On-line PLC has been trading on the AIM marketplace since 1996.  The $80+ surge was its highest mark since the early 2000s.  Which of course coincides with another famous bubble.

So who is ‘On-line Blockchain PLC’?

The company bills itself as an ‘incubator and investor in internet and information businesses,’ a description that now includes ‘blockchain’.

“Blockchain technology and cryptocurrencies are a new and exciting area we have been working on for some time,” the company stated on Thursday. “We feel the time is right to re-name the company to reflect these developments, where we believe the future growth will be in our sector.”

In an announcement issued shortly after the bell, the company embraced its newfound success.  “The Board of On-line PLC (AIM: ONL), notes the significant share price movement today,” the company issued in a statement.

But shares cooled after the company disclosed its actual plans around blockchain.  “Shareholders should note that the while the Company has identified an initial product, the Company’s development of a Block-chain product is still at an early stage of investigation and development,” the company stated.

“Its current plans envisage that the first application will only be tested early in 2018.”